As we hopefully all know by now, the claim that Earth’s temperature is higher than it ‘should’ be is based on sleight of hand – they use two quite distinct definitions of ‘surface’ and flip back and forth between them depending on what point they are trying to make.

Definition A is ‘the surface you can see from space’, which is largely clouds and some land/ocean that is not below clouds. Definition B is the land/ocean surface, which is of course lower than A and hence warmer. The reason it is warmer is the gravito-thermal effect. The trick they use is to pretend that A and B are inter-changeable, compare the expected temperature of A with the actual temperature of B and then say the reason is ‘heat trapping gases’ (they might as well blame it on The Seventh Curse of Zog).

The problem with basing a theory on what is basically a Big Fat Lie is that you have to keep making up more lies to explain other phenomena.

From NASA’s brainwashing for kids site:

So clouds can have both a cooling effect and a warming effect. When it comes to Earth’s climate, do clouds warm more than they cool, or is it the other way around? Well, that depends on where the clouds are in Earth’s atmosphere.

Clouds within a mile or so of Earth’s surface tend to cool more than they warm. These low, thicker clouds mostly reflect the Sun’s heat. This cools Earth’s surface.

Clouds high up in the atmosphere have the opposite effect: They tend to warm Earth more than they cool. High, thin clouds trap some of the Sun’s heat. This warms Earth’s surface. 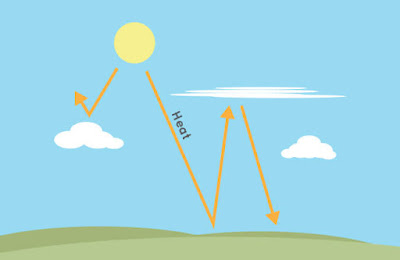 They are making stuff up. Two otherwise similar clouds at different altitudes will reflect/absorb the same amount of sunlight and reflect the same amount of IR from Earth’s surface. The correct explanation is far simpler and more coherent:

Clouds are primarily warmed by the sun from above! There, easy. Once you accept that obvious statement, the rest follows. The temperature the clouds are (trying to) reach is the same, regardless of altitude. The temperature below the clouds rises with decreasing altitude, at (say) 7 degrees per km altitude (the gravito-thermal effect). We were on holiday in Yorkshire last weekend and this was very noticeable – there was more or less 100% cloud cover, but they were very high up and it was very warm down below.

So the area under the higher cloud is warmer than the area under the lower cloud. (As an aside, this explains the stupid high temperatures on the hard surface of Venus – their cloud cover is about 70 km up!). Here’s a very simplified diagram to illustrate the point (the 260K is just a number, clouds are usually much colder than this): 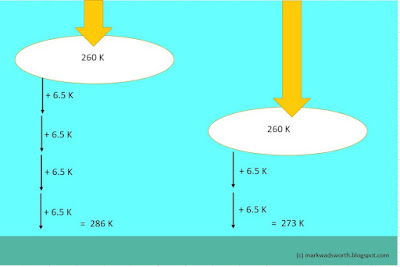 I realise that there is a lot more to all this; I am just addressing the narrow point about high clouds v low clouds.