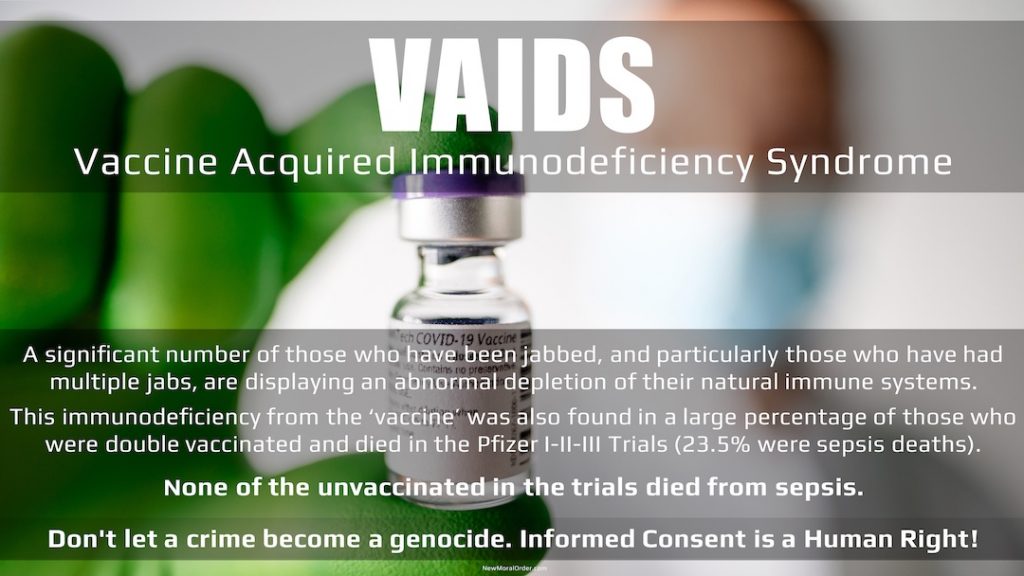 SOTN Editor’s Note: The following exposé imparts crucial Covid vaccine information/data that’s of paramount importance for every person on the planet to comprehend.  Everyone needs to correctly understand the true depth and breadth of the highly complex international criminal conspiracy to create a global VAIDS pandemic.  Please send out and post this vital VAIDS info everywhere—thank you! 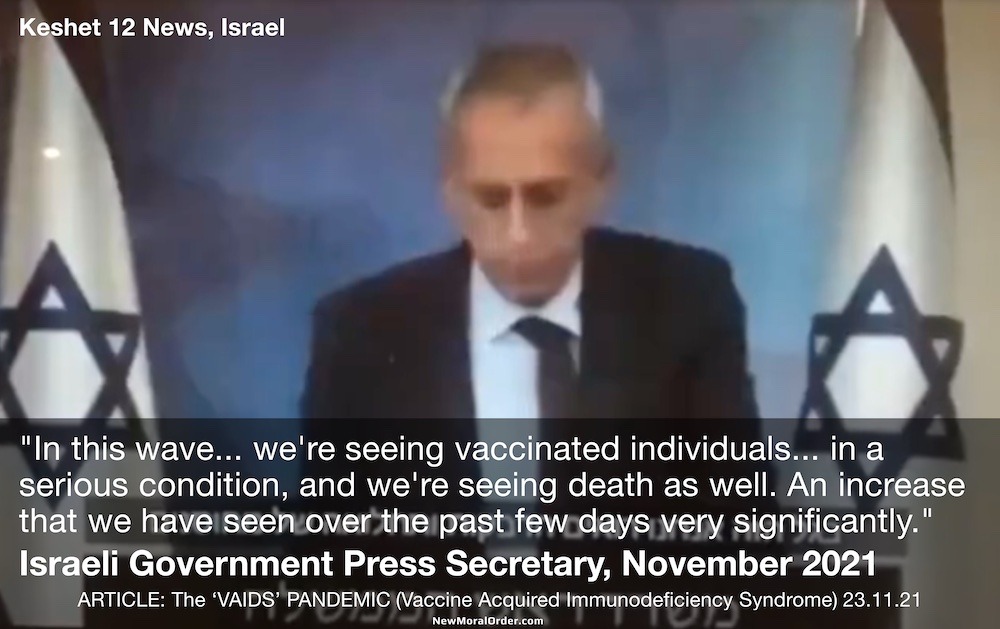 Sometimes, a situation calls for the creation of a brand new term, in order to describe the unique and monumental scale of its effect upon people and society. This is just such an occasion, and so I have coined the word ‘VAIDS‘ to describe what we are currently witnessing in those who have been injected with various experimental concoctions under the guise of a COVID-19 ’emergency’.

If what you see happening around you concerns you as much as it concerns me, get to know this new term and discuss it with others far and wide. Thank you.

“In this wave… we’re seeing vaccinated individuals… in a serious condition, and we’re seeing death as well. An increase that we have seen over the past few days very significantly.”

“The almost vast majority of the deceased are vaccinated people, that seemingly have gone though ‘immuno-erosion’. 83 dead in the past month.”
Keshet 12 News Presenter, Israeli TV 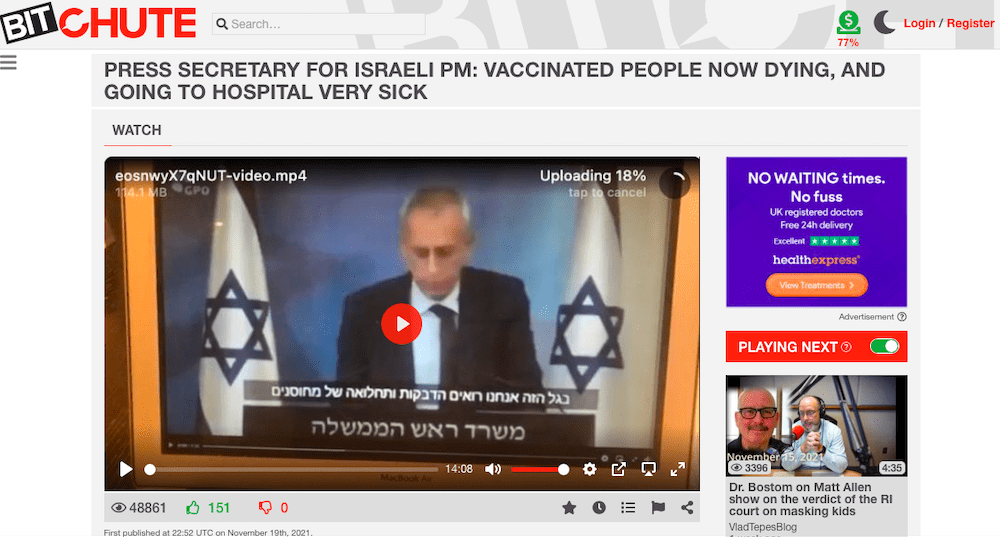 Due to the fact that Israel is the most vaccinated nation on earth, and that its scientists have probably undertaken more independent studies on the effects of the vaccine than any other country to date, the following mainstream news report illustrates a number of very important concerns, which the public around the world urgently need to fully comprehend.

1. Israeli Government Concerned about this New Wave of Severe Sickness and Death in the Fully Vaccinated
The most recent wave of hospitalisations, serious illnesses and death directly relates to fully vaccinated people, and is causing significant concern at the government level.

2. The Serious Reality of ‘Vaccine Acquired Immunodeficiency Syndrome’ is Becoming Apparent
The central reason for this vaccine sickness appears to be what is now often being referred to as ‘immuno-erosion’. This gradual destruction of the human immune system by vaccines (which I am now labelling as ‘VAIDS’ or Vaccine Acquired Immunodeficiency Syndrome) has been discussed in detail over the last 2 years by experts such as Dr Robert Malone, Dr. Sucharit Bhakdi and many others, and subsequently broadcast to the people via thousands of ‘conspiracy realists’ and ‘independent journalist’ alike.

The establishment has systematically censored all such attempts to warn the public of the extreme risks of species wide ‘immuno-deficiency’, in relation to any broad-spectrum vaccination agenda. Once again, it seems that the ‘conspiracy realists’ were 18 months ahead of the medical industry, the mainstream media, and the State.

3. Efficacy of Vaccines Continuing to Plummet and now at 40% in the Only Fully Vaxxed Nation on Earth
According to Israeli data, the efficacy of the vaccine has fallen to 40%, in contrast to higher efficacy rates promoted in the UK and US. As Israel has become known for being ahead of the game in regards to studying the effects of the vaccine, and because those studies are based on the highest vaccinated population on the planet, this very low – and persistently falling – efficacy rate, should be regarded as the definitive reality, which other nations would also see if their population’s were to be vaccinated to the same degree.

4. State’s Are Promoting Freedom to the Fully Vaxxed (Vaccine Passports), Whereas the Fully Vaxxed are Now Shown to be the Most Severely Sick, and the Fastest Dying Category
Last, but certainly not least, we are told by a couple who were both vaccinated, that as far as the State was concerned, they were not subject to any restrictions on travel or movement, simply because they had been fully vaccinated, and yet both of them contracted COVID, and freely transmitted it throughout the general populace.

Of course, this makes a total mockery of the idea of vaccine mandates, and especially vaccine passports. Let’s follow the science. The data from Israel is clearly showing that not only does the vaccine have a very low and diminishing effect on contracting COVID, but it also has no apparent effect on transmitting COVID, and most importantly, it has an apparently severe and escalating tendency to result in hospitalisation, sickness and death, with those results increasing with each consecutive jab!

The following transcript was taken from a subtitled news report, broadcast in the last week by Keshet 12 News – Israel’s most watched commercial TV channel.

News Presenter 1: The almost vast majority of the deceased are vaccinated people, that seemingly have gone though ‘immuno-erosion’. 83 dead in the past month.

News Presenter 2: At the same time, in addition to this number that we see on the screen, there are 15 sick that are in serious condition.

News Presenter 3: Let’s admit the truth, at the moment we don’t really know, because as Bennet himself said [Naftali Bennett, Prime Minister of Israel] in his opening statement “We don’t have anyone to learn from, we’re the only country that is vaccinated to such an extent.” In the entire world, this is a completely novel challenge, and therefore we must gather just a bit more data, and then decide.

Hospital Doctor: Certainly, it is starting to bother us.

News Presenter 4: Meanwhile, we are becoming aware of the fact that the Director General of the Sheba Hospital, Professor Yitzhak Kreiss he was, you recall, the third person to get vaccinated (in Israel), after the Prime Minister and Minister of Health – he has also become sick with COVID despite being vaccinated. Do you have a clear position, Professor, regarding what they call the “boost” [booster jab]? That is an additional dose, which we must say, is still not to be found in Pfizer’s protocols.

News Presenter 4: Yes. Yesterday, around eight in the evening, the Health Ministry published data, seemingly about a decline in the efficacy of the vaccine, and that’s at the very least, a bit strange.

News Presenter 5: By the way, what about the transparency of the “Corona Cabinet”? All of the Ministers of the Cabinet promised us, they fought for it during the previous administration, “Yes, we’ll publish the protocols”, okay, so on with it!

News Presenter 2: 30 years (of confidentiality), what’s the big deal? So where do we see it happening? We’re in favour of the protocols being published, and we’re especially in favour of much more data from the Health Ministry.

New Presenter 4: But they came out against this secrecy, now they (the new government) are there and they’re continuing with the secrecy!

News Presenter 5: [jokingly] If the coronavirus finds out what we’re going to do, it will know, if the virus doesn’t know…

News Presenter 2: There is a very problematic conduct in the data of the Health Ministry. This week, in response to our request, they gave us the breakdown of the seriously ill into vaccinated and non-vaccinated [resulting in this news report]. They’ve promised us that starting next week, it will be published on a regular basis. I’m waiting to see. Yes, there is a very significant discrepancy between the data of the studies done in Israel on the efficacy of the vaccine versus those published in Britain and in the United States, especially pertaining to infection, because according to the study that was conducted here in Israel, the efficacy against infection fell to 40%, the efficacy of the vaccine. And really, many questions arise how we’ve arrived at such a low number [efficacy rate]. Even though, like Arad said…

Presenter 6: Most of the patients right now, are vaccinated, obviously.

Video Report Clip
Interviewee: And the funniest thing is that we ask them [the doctors]. Okay I got infected, but before she did the test [referring to partner with young baby]. I got infected, you informed me that I’m sick with COVID. What happens with her? So they ask me on the phone: “Did she get vaccinated?” I told her [the doctor], yes, we both got vaccinated. [Doctor replies:] “No problem, she doesn’t need to quarantine, she can travel freely.” Okay, so she was going around freely, and now a few days later we did a test again and she’s positive. What happened during that time that she was going around outside?

Get to know this term and discuss it with others.

It took years for the reality of the AIDS risk and death toll to be admitted and reported on the news. History appears to be repeating itself but only on a much grander scale.

Make the VAIDS Pandemic the main news story, before it’s too late!