1. Special instructions about not going walking in Potsdam, Germany, just outside of Berlin. 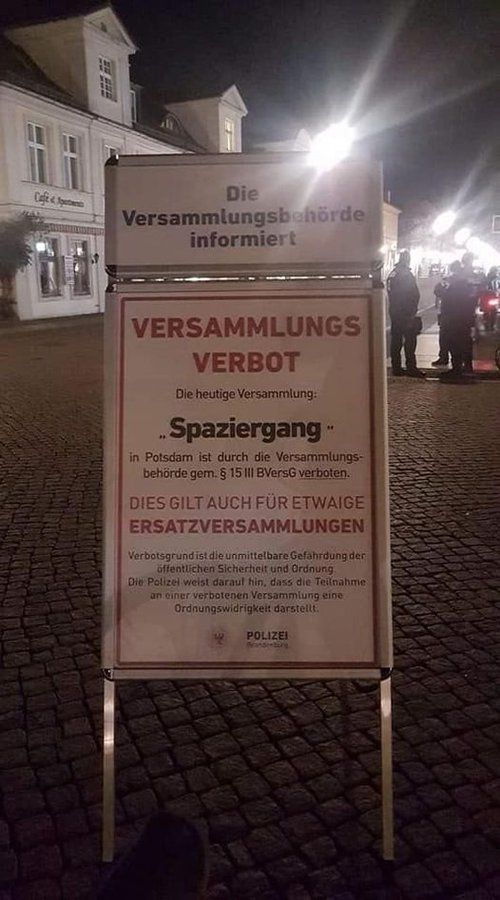 The Assembly Authority informs
Assembly Ban for Today’s meeting:
“Walking”
in Potsdam is prohibited by the Assembly Authority according to § 15 III 13 Vers G.
This also applies to any substitute meetings.
The reason for the ban is the immediate threat to public safety and order. The police point out that participation in a prohibited assembly is a misdemeanour.
Brandenburg Police

Prime Minister Scott Morrison has urged parents to ignore George Christensen, a member of his own government, after labelling the member for Dawson’s calls for them not to immunise their children as “dangerous”.

The Queensland MP, who has announced he will not contest the next election, released a podcast on Tuesday morning under the title “Do NOT vax your children” accompanied by an interview with Dr Robert Malone, whose views on COVID-19 vaccinations have been widely debunked.

Dr Malone has been permanently suspended from Twitter for spreading COVID-19 misinformation.

“I strongly disagree with the message sent out by Mr Christensen regarding children’s vaccinations,” Mr Morrison said in a statement.

Listen to the experts and ignore George Christensen. If you have any concerns about COVID vaccines for you or your family members, ask your GP. Mr Christensen’s comments are reckless, irresponsible and ill-informed… just more of the same conspiracy theory crap. #lovegippsland

Here is a link to the podcast which has caused Australian Party Chairman, Scott Morrison to come out with such deceptive vitriol.

Here is a short excerpt from the 27 minute podcast

(Someone correct me if I’m wrong, but Scott Morrison is also not a doctor, and he is forcing his medical opinions on the entire country. So it is the height of arrogance to discount his own minister who suggests children do not get the vaccine because he is not a doctor, especially when he is partnered in his podcast with the INVENTOR of mRNA gene therapy, Robert Malone.)

4. So Trudeau of course worked out the whole trucker border crossing mandatory vaxx madness with the Biden admin. That way if Trudeau appears to pull back on it it won’t make any difference. Our governments are about the lie for the effect. And that is all. There is no law per se. No justice as such and certainly no individual rights. Just a mockery of it by unconstitutional regulations and end runs.

A senior administration official told The Associated Press the requirement, which the White House previewed in October, brings the rules for essential travelers in line with those that took effect earlier this month for leisure travelers, when the U.S. reopened its borders to fully vaccinated individuals.

Essential travelers entering by ferry will also be required to be fully vaccinated by the same date, the official said.

The rules pertain to non-U.S. nationals. American citizens and permanent residents may still enter the U.S. regardless of their vaccination status, but face additional testing hurdles because officials believe they more easily contract and spread COVID-19 and in order to encourage them to get a shot.

(Translation from BS to English: Canadian Truck drivers even if Trudeau permits them to enter from the US without a shot cannot get into the US without one. Americans will be harassed with tests not because they are meaningful but because it is hoped that the additional agrevation it causes will make people’s personal cost benefit tilt towards taking an experimental mRNA gene therapy shot or three.)

5. Belgium No Longer Recommending Moderna Vaccine For Those Under 31 Due To Risk Of Heart Inflamation

(But … but … but … safe and effective… right?!?!?! Remember that ModeRNA is exactly the same crap as Pfizer but a higher dose.)

The nation of Belgium will no longer be recommending the Moderna COVID-19 vaccine for citizens under the age of 31, after data shows that using it for the first or second dose of vaccination may cause heart inflammation such as myocarditis.  The decision was announced last week by the Belgian Vaccination Task Force.

According to The Brussels Times, Danish studies indicate “that vaccination with Moderna resulted in an increased risk of inflammation of the heart muscle in young men following the first or second dose in comparison with the Pfizer vaccine,” for those between the ages of 12 and 39. […] Moderna is still considered safe for booster shots, as only half a dose is given at that time. “

Thank you Johnny U., M., Xanthippa, EB., ET., Snaphanen.Dk., Sassy, Major Tom, X. and all who sent in materials this past week. A week which went by so fast its like it didn’t happen. But it did.

The thing is, I’m not sure any real changes are or will happen. Spain is pretending it will, but not. We will know soon. Look out for false flags like January 6th where the name, “Ray Epps” will replace the name, “Big Brother” as the face of totalitarian oppression i bet.