There have been two serious cases of dog attacks on humans this week alone resulting in death.

This is an escalating problem, brought about by several factors: the risible Dangerous Dogs Act that only appears to come into force after an attack by breeds that should not exist; and the ever growing belief in the modern world that one has to be noticed, not by actually achieving anything of value but by being seen, whether with a stupid haircut, assorted bad tattoos that require the owner to wear shorts in the winter so everyone can ‘marvel’ at the art work(!), deliberately loud vehicle exhausts so you know when x is passing or arriving, ditto the open window music aficionados who insist you share their taste in whatever is being played at full volume, plus various other disfiguring acts to face and body that only the demented could find attractive but make you fit to make a Tik Tok video where you can compare notes with others similarly afflicted.

Much of this can very loosely be described as fashion, as in ‘what can we do this year to be seen with/at/doing/wearing with the least action on actually improving the human condition?’

Dogs sadly fall into this ‘I own a (fill in breed), what do you own?’ category. I am not saying that nobody should not have the choice of breed they desire, apart from the obvious ones that fall into the bloody dangerous category, as long as they know what they are taking on, have the lifestyle to entertain such a purchase and look after them and give them basic training.

Those that know me will also know I always had dogs up to some years ago when circumstances meant I was not in a position to give them the time and effort they require so have been without a dog; sadly, since I also trained dogs for competition for almost twenty years and chaired a committee on dog training at the Kennel Club – not that the latter is of any significance in any of this – and I did see some dogs that despite not falling into the dangerous breeds sector were as individuals dangerous by nature.

There were those then and there are today many who say there is no such thing as a dangerous dog, just poor owners. Only partly true: as with humans there is the odd dog who has a trait that makes him dangerous and in these cases no one should attempt, whoever the owner might be, to re-home such animals as certain virtue signalling organisations would have do.

This chap falls into that category and paid the ultimate price: 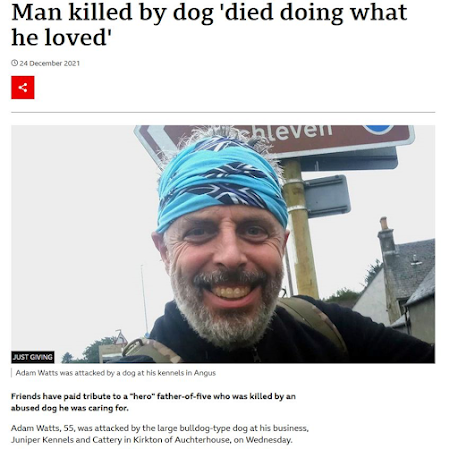 The article contains all those things I have spoken of above, including the re-homing of dogs that should be in most cases put down. It is a very misguided way of thinking when you find a home for a potential killer believing all will be well ‘because there is no such thing as a bad dog’.

I remember many years ago talking to a dog trainer in the army. At that time, I can’t say what the situation is now, they had dogs for specific purposes. One of those were the site protection dogs, those that would guard facilities and be based between two sets of fencing; their sole job was to protect the site and attack any intruder. These dogs, all German Shepherd Dogs if my memory still serves me, knew nothing else and unlike the other dogs could not be re-homed when they were retired for safety reasons and were put down.

This from 2012 tells the story of dogs that cannot be safely retrained. If the army can’t retrain them safely then the general public should never be allowed near such dogs, yet those hand-wringing appeasers would have you believe otherwise, always at someone else’s expense.

There are even cases of kennels having to take back unsuitable dogs and then re-homing again. It takes a strange mind set to think this is safe practice.

Destroyed after doing their duty: Scandal of 807 guard dogs put down by Army after faithful service

The headline is wrong as it calls it a scandal then goes on to explain why they are put down; nothing scandalous about it, simply safe if sad practice.

Keeping that in mind, why are the general public owning dogs bred to fight in a domestic situation and in most cases with owners who have not a clue what they are doing or taking on. We have all seen the young mum pushing a pram along with a pit bull on a lead alongside; stark staring mad, anything for a fashion statement.

I remember the first time I saw such a stupid scene. It was in Haverhill, Suffolk that was near to the village we lived in at the time. I was waiting outside of a bank for the wife to emerge and on the opposite corner was the stereotype hard case or thought he was, standing wearing boots, a vest, carrying a baseball bat and a pit bull on a lead with the other hand; he was talking to some other dim-looking youngsters who thought it was all terribly macho. That was thirty years ago, we have gone backwards as this is sort of behaviour is an almost commonplace sight in certain areas.

The Dangerous Dogs Act is like dangerous driving, only a good law if it is enforced. Lack of staff and will or both means that nothing will change and lessons will be learned after the event, except they won’t.

The act (linked above) is full of will-be’s and cannots, but how do you enforce any of this. You can’t, and the cases of incidents just keep rising.

The issue of breeds that are cross bred deliberately and so are not covered by the legislation is an insurmountable problem that is exploited by those wanting to circumvent the law.

This article in the Mirror from 2020 shows the increase in attacks to that time over a period, and the attacks on children have escalated. This area we can put down to the feckless who believe one of these dogs or any dog can just become one of the family unsupervised; dumb and dumber.

The PDSA blames irresponsible owners; yes fine, but there is absolutely nothing there to stop anyone going out and buying any breed on a whim and putting that dog into a potentially life-threatening environment. We live in a time when many simply say ‘I will do what I want’ without ever considering the consequences. Saying that ‘Buster’ has never been a problem before when we left him alone with our one year old, after the event/death, is not the comment of a sane person but still it goes on.

It is difficult to find any videos other than a few police ones depicting the dim denial responses of owners to any criticism of owning these animals. I would not normally put up Judge Judy as her show is about entertainment value more than the outcome, still this compilation does show the sheer stubborn stupidity of owners of dangerous dogs when faced with the truth:

This one is interesting as it includes a police dog handler who quite frankly shouldn’t be allowed out, a complete idiot.

Is there a solution? The PDSA and the Kennel Club plus others call for education of owners; the naivety of that statement can’t be underestimated as there is no way the hundreds of thousands who buy dogs are obliged to listen to anyone and they don’t.

Yes, it would help if all potential dog owners were obliged to undergo some sort of awareness training regards dog ownership. That is not going to happen and the logistics prohibit it anyway; and will those wanting a banned breed for whatever purpose be listening? As they used to say in my old neck of the woods, ‘You’re having a giraffe.’

I well remember one case at our dog training club, of a family who brought in their Old English Sheepdog for basic training and bit by bit the sorry tale unfolded: the dog became possessive of the kitchen which he slept in and ended up attacking the family when they tried to enter. As they had young children they were at their wits’ end as to what action to take and ended up at the club for help.

On this particular night the dog attacked the owner totally unprovoked, and somebody suggested as it was my breed? that I should take charge of the animal while they went for the first aid kit.

I made the dog sit by my side with no problem then out of the blue after a couple of minutes he went for me. I was prepared for to this and pulled up his lead to limit his movement and the lead broke, allowing the dog to bite me. He then sat back quietly as though nothing had happened. I held his collar while someone went and fetched a suitable lead and I handed the dog back; they had it put down the following week.

The reason I relate this tale is that a dog does not have to be one of the categorised dangerous breeds to be dangerous. Any breed can have the odd genetically flawed version in its ranks; that is nature, regardless of what those may say that never see any fault in any animal.

Unfortunately you can breed for those characteristics in dogs as you can for any other. Nearly all breeds have come from stock that were bred for some specific task and that includes guard dogs.