Russian leader has buried the old world order and outlined his view on Russia’s and the world’s future, in a key address 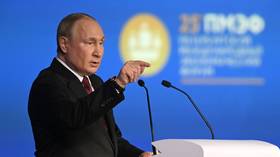 New centers of power have emerged, the unipolar world order isn’t coming back, and the “colonial” way of thinking has failed, Russian President Vladimir Putin told the St. Petersburg International Economic Forum (SPIEF) on Friday, in what the Kremlin described as an “extremely important” speech.

The old world order is gone with the wind
When the US declared victory in the Cold War, Americans designated themselves the “messengers of God on earth,” with interests that should be considered sacred and no obligations, Putin told the audience at SPIEF. New centers of power have since emerged, and have the right to protect their own systems, economic models and sovereignty.
These “truly revolutionary, tectonic changes in geopolitics, the global economy, in the technological sphere, in the entire system of international relations,” are “fundamental, pivotal and inexorable,” Putin said. “And It is a mistake to suggest that one can wait out the times of turbulent change and that things will return to normal; that everything will be as it was. It will not.”
Anti-Russian sanctions backfired on the West
When the US and its allies launched the campaign to “cancel” Russia over the conflict in Ukraine, they hoped to crash and undermine the Russian economy and society. The sanctions have instead boomeranged on their creators, aggravating social and economic problems, driving up the cost of food, electricity and fuel, and hurting the quality of life across the West, but especially in Europe.
“The European Union has completely lost its political sovereignty, and its bureaucratic elites are dancing to someone else’s tune, accepting whatever they are told from above, causing harm to their own population and their own economy,”Putin said.
EU citizens will pay the price for “decisions divorced from reality and taken contrary to common sense,” he added, as direct losses from the sanctions alone could exceed $400 billion in a year.
Energy prices and inflation are self-inflicted
Blaming the high energy prices and inflation in the West on Russia – “Putin’s price hike,” as the White House put it – is a “stupidity” and “designed for people who can’t read or write,” the Russian president said.
“Don’t blame us, blame yourselves,” Putin said.
The EU “blindly believing in renewable sources” and abandoning long-term natural gas contracts with Russia led to the spike in energy prices last year, according to the Russian leader. Meanwhile, both the US and the EU addressed the Covid-19 pandemic by printing trillions of dollars and euros.
‘Elite change’ awaits the West
Policies undertaken by EU and US leaders are exacerbating inequalities and divisions in their societies, not just in terms of welfare but in terms of values and orientations of various groups, Putin said.
“Such a detachment from reality, from the demands of society, will inevitably lead to a surge of populism and the growth of radical movements, to serious social and economic changes, to degradation and, in the near future, to a change of elites,”the Russian leader said.
If there’s a famine, it won’t be Russia’s faultUS and EU sanctions against Russia – in particular fertilizer and grain exports – are one of the reasons for growing global food insecurity, Putin pointed out. If there is famine in the world’s poorest countries, “this will be entirely on the conscience of the US administration and the European bureaucracy.”Troubles with food supply have arisen over the past several years – not months – due to the “short-sighted actions of those who are accustomed to solving their problems at someone else’s expense,” distorting the trade flows by printing money in a sort of “predatory colonial policy,” Putin said.Russia is ready to send food to Africa and the Middle East, where the threat of famine is most acute, but faces “logistical, financial, transport” obstacles imposed by the West, he said.
Reasons for the Ukraine conflict

Russia sent troops into Ukraine in February because the West refused to abide by its obligations, and it was “simply impossible to reach any new agreements with them,” Putin said. The decision was “forced, but necessary,” as Russia had every right as a sovereign country to defend its security and protect its citizens and residents of Donbass from “genocide by the Kiev regime and neo-Nazis who received the full protection of the West.”The West spent years turning Ukraine into an “anti-Russia” state and pumping it with weapons and military advisers, Putin said, pointing out they “did not give a damn” about Ukraine’s economy or the lives of its people, but “spared no expense to create a NATO foothold in the east, directed against Russia, to cultivate aggression, hatred and Russophobia.”“All the objectives of the special military operation will be unconditionally achieved,” Putin said.
Economic development is an expression of sovereigntyIn the 21st century, sovereignty can’t be partial, Putin argued. All of its elements are equally important and complement each other, and the economy is one of them. There are five key principles Russia will follow in economic development: Openness, freedom, social justice, infrastructure, and technological sovereignty.Russia will “never follow the path of self-isolation and autarky,” but will expand interactions with anyone who wishes to trade, Putin said, adding there are “many such countries.” Moscow will also support private enterprise, build and repair its transportation infrastructure, seek to reduce social inequality, and ensure its key technologies are not dependent on foreign imports.“Truly sovereign states are always committed to equal partnerships,” while “those who are weak and dependent, as a rule, are busy looking for enemies, planting xenophobia, or finally losing their originality, independence, blindly following the overlord,” he said.

Loading...
"Not by might, nor by power, but by my spirit, saith the Lord of hosts." Zechariah 4:6
BEFORE IT'S NEWS ON TELEGRAM
GET THE TELEGRAM APP - https://telegram.org/ JOIN OUR CHANNEL - https://t.me/BeforeitsNews
Read it..
BEFORE IT'S NEWS
SIGN UP FOR OUR NEWSLETTER
Today's Top Stories
X22 Report: Door Has Been Opened! The Enormity Of What Is Coming Will Shock The World! Now They All Lose! - Must Video
New Juan O Savin: Trump's FBI Raid! Weaves the Whole Picture Behind It! - Gitmo Televised Coming!
The Deep State Stepped In It This Time! Next Phase Starts Now! Thank You Deep State! - On The Fringe
ALWAYS 10 Steps Ahead! The RAID! Coverup? FEAR Mongering? We Watch & LAUGH! Awake Yet? PRAY! - And We Know
What Happened Right Before Trump Got Raided Is Key to Everything! FBI Laid Bait!!
Situation Update: Deep State Coup Has Begun! Trump Mar-a-Lago Residence Raided By Corrupt FBI! Truth Bombs Incoming! White Hats To Shutdown Blackrock/Vanguard In Red States! China Military Build-up At India Border & Taiwan! - We The People News
Juan O' Savin and David Nino Rodriguez: The FBI Raid Update: It Ain't Over- Gut Punch Coming (Video)
Alert: Google Center Blown Up! Get Ready! Things Are Worse Than They Say! - Full Spectrum Survival
Bob Lazar: Ancient History is Hidden From The Public August 2022
It's On!! President Trump Declares War on Federal Government!! (Video)
Loading...
Featured
The Biggest Mistake In The History Of The FBI! - The Dan Bongino Show
Shipping Prices Shot Up 1,000% As Port Congestion & Container Shortage Collapse Supply Chains! - Epic Economist
MAJOR Warning to ALL Preppers & Homesteaders! - Patrick Humphrey Preparedness
Situation Update, Aug 10, 2022 - Lawmakers Call For NULLIFICATION Of Corrupt Federal Agencies Like FBI, IRS, EPA, ATF, DOJ! - Mike Adams Must Video
WEF Will Starve A Billion Human Beings To Death
They Will Be Coming For You Next! This Is Part Of Their Agenda! - Asymmetrical Preparedness
SHockER! More Fake Data & Stocks Are Poised To Take Off! Very Important Updates! - Greg Mannarino
The Trump Raid And The End Of The United States
Climate Change – Where Hidden Powers Manipulate Your Weather and and Blame it on You – Dave Cullen in 2019 but just as relevant today
GOP Rep’s Phone SEIZED By FBI The DAY AFTER Trump’s Raid As Weaponized Law Enforcement RAMPS UP
Loading...
Top Global
WEF Will Starve A Billion Human Beings To Death
New mRNA Covid Jabs Will Contain 3 Different Spike Proteins!” – Dr. Meryl Nass
World’s largest nuclear power plant under heavy missile attack
Digital ID Tyranny is being Rolled Out Across the World
What Is Called ‘Science’ Today Is Nothing More Than Political Ideology Masquerading as Science – Gary D. Barnett
Emergency Broadcast: Deep State Coup Against America Happening! - Roger Stone & Steve Bannon - Alex Jones Must Video
Ukraine’s military gone, rampant corruption leaked documents reveal | Redacted with Clayton Morris
14 Young Canadian Doctors Die After Getting The Shot, Normally ~0
Breaking Russian News Report! Japan's entire government resigns New composition of the Cabinet of Ministers to be announced in the coming hours
The situation in the Ukrainian SMO on August 9, 2022
Top Alternative
With your silence, what are you tacitly supporting? Read here.
CBC gets a pat on the wrist for brutal levels of racism and hatred: Links 1, August 10th, 2022
Good News: Inflation To Stay High Even As Gas Prices Fall
The Real Reason Behind The Raid
Strange time to order a raid
We Have Gone From the Greatest Generation to the Most Retarded Generation - Here Is Proof (Video)
It's On!! President Trump Declares War on Federal Government!! (Video)
Juan O' Savin and David Nino Rodriguez: The FBI Raid Update: It Ain't Over- Gut Punch Coming (Video)
Prophecy News - 'Playing in the hands of the enemy', two dreams given to McKana, August 2nd & 4th 2022
Hot Take: Trump Could Be Charged With Espionage Act Violations