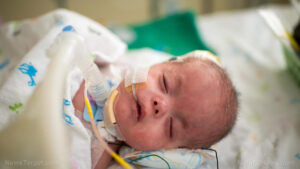 New South Wales (NSW), Australia, has seen a nearly 10-fold increase in recent weeks of so-called “pandemic babies” who are having to be rushed to the hospital for intensive care treatment.

Reports indicate that these little ones are developing a mysterious respiratory illness that requires critical medical intervention. The media is calling the disease respiratory syncytial virus, or RSV.

Every year, some 120,000 young children are said to die from RSV. And in NSW, rates of it exploded from just 355 cases per week just three weeks ago to 3,775 cases per week currently.

The United Kingdom-based news outlet Daily Mail reported that these babies are getting sick and dying because they have “no immunity.” This points to the children’s parents, and mainly their “fully vaccinated” mothers, not conferring to them proper immunity.

Recognizing that Wuhan coronavirus (Covid-19) “vaccines” destroy the reproductive process, it only makes sense that those babies who somehow make it through alive will more than likely be defenseless immune-wise, as we are now seeing.

Babies with RSV are also testing “positive” for covid

Doctors familiar with the disease say that children born with it develop serious illnesses “from encountering viruses they haven’t come across before,” such as influenza and covid, which are said to be in the same family as RSV.

Dr. Philip Britton from the Children’s Hospital at Westmead says that an analysis of intensive care unit (ICU) admissions across Australia show that babies with RSV are testing positive for both influenza and covid, all at the same time.

“Over the last month or so, we have seen four times the admissions to hospital for flu in children as for covid,” he told The Daily Telegraph.

Right now, about five percent of all children presenting with these co-infections are having to be admitted to the ICU. Britton says this is “very concerning” and out of the ordinary.

“About half of the children had no pre-existing health conditions, with the elevated number of admissions putting pressure on the hospital system,” the Daily Mail adds.

“Some of the ‘pandemic babies’ are presenting with inflammation of the chest, brain and heart caused by influenza, Covid, and RSV.”

RSV, which has technically been around for a while, has not seen a surge like this since, you guessed it: right around the time when Operation Warp Speed was launched.

“Among that group who are previously well … It’s not just a chest infection, some of these children can be impacted with the flu affecting the heart and the brain,” Britton further warned about the severity of the disease as it is now being seen in tiny babies.

Reports indicate that around 20 percent of the babies developing RSV in Australia also develop potentially lethal bronchiolitis. Some 40 percent of these end up having to be admitted to the hospital.

“There is a widespread three-way outbreak occurring,” Eden told the Daily Mail Australia – and keep in mind the fact that Australia is currently in the dead of winter, being in the Southern Hemisphere.

“With covid layered up on top, these are three main viruses which will lead to hospitalization,” he added.

Some are blaming the sudden spike in infant RSV on Australia opening up its borders, the suggesting being that tourists and residents are bringing it back with them from elsewhere.

The reality, though, is that Australia mass-jabbed its population last year, damaging the immune systems of countless millions of people. And now those people are having babies with damaged immunity, all because of the jabs.

The latest news about Chinese Virus injections can be found at ChemicalViolence.com.