1. Justin Trudeau, like his father, couldn’t resist a moment to humiliate or ridicule the Queen of England. Justin was seen singing Bohemian Rhapsody at a London hotel. His father instead, decided to do a little pirouette while walking behind the Queen. For some reason. While on a state visit as PM of Canada.

From the Daily Mail:

Trudeau is celebrating his accession as Queen of Canada by drunkenly singing for an audience at the funeral of his predecessor. Classy. pic.twitter.com/kpXTPcQ71f

A federal appeals court just struck a massive victory for freedom of speech.

On Friday afternoon, in a brilliantly argued 90-page decision, the Fifth Circuit Court of Appeals ruled in favor of a Texas law stopping the biggest social media companies from censoring their users.

The ruling will likely be appealed to the Supreme Court, setting up a hugely important battle. If the high court confirms the Fifth Circuit’s view, companies like Twitter will mostly lose the power to censor their users for legal speech. If not, their censorship could become even more aggressive.

(A clarion call for free speech:)

3. Viva Frei does 57 minutes on the horrors that Trudeau does, the most Nazi like indoctrination of children and more

4. The tale of the doctor with the broken heart

Alex Berenson details a story about a vaxx injured doctor, and how officialdom and medicine lied and denied and covered it up. Click through to read the details.

But the good news is this:

5. It appears people are fighting back against the various colleges of surgeons and physicians in Canada. They have become a kind of MAFIA for the government and drug companies. Although that is an unfair comparison in some ways. The MAFIA never forced people to take their drugs or receive their loans or use their services. There is a live stream September 20th, (Tomorrow!) 1:00 PM EDT. All who are available please try and join. This is crazy important and not just to Canada. Clearly similar institutions across the West have been reformatted in a similar way for the same reasons. We have a chance to fight back. Let’s take it. 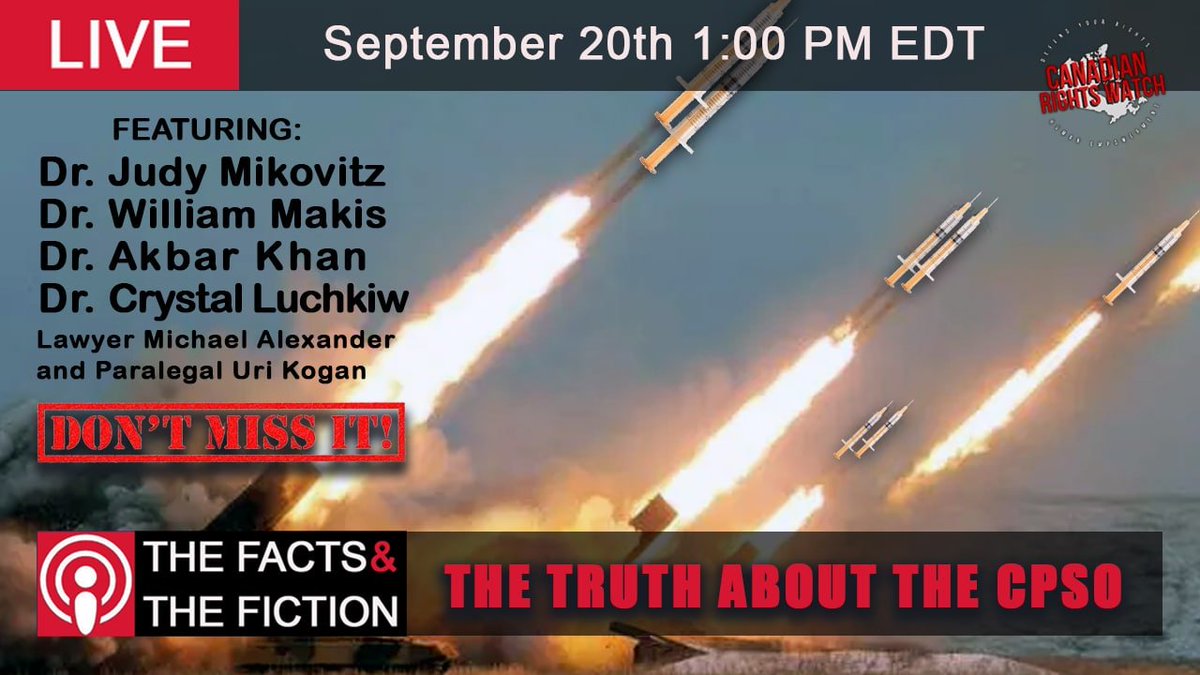 Tuesday (tomorrow) at 12pm ET. You don’t want to miss this one! Discussing the truth about (and corruption within) the College of Physicians and Surgeons of Ontario. pic.twitter.com/WZmXwgp8Q5

Some readers may have seen the interview with one Ottawa doctor who is being destroyed and threatened with JAIL for not submitting patient files to the college. That, is how bad they are.

More to come later tonight or early tomorrow. Thank you all for your attention and I hope you all watched Tucker tonight. he hit all the major issues in one show. With luck, we will be able to post it soon here.