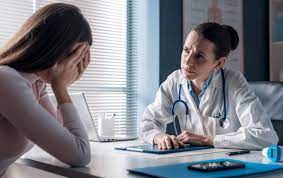 This article was first published over two years ago – on 12.7.20. Sadly, it remains perfectly valid today.

A growing number of doctors and nurses appear to be waking up and questioning the absence of any science behind the coronavirus hoax.

That’s very nice, and I congratulate them.

But what the devil took them so long?

Why did they wait so long to speak out?

Their silence betrayed their patients, their profession and themselves.

Only a complete moron could have thought that this manufactured `crisis’ necessitated the closure of hospitals and GP surgeries.

How could doctors stand by seeing cancer patients deprived of essential treatment? The NHS should have been stoned not clapped.

There was never any greater risk than there is with the flu every year.

Indeed, the figures show that the ordinary flu bug has always posed a much bigger risk than the coronavirus.

So far this year the coronavirus has affected 10 million people worldwide.

The flu can affect 1 billion people in the same period.

And the mortality rates for the two are almost identical.

We don’t close down hospitals and clinics whenever the flu appears.

So, obviously, this was a politically motivated closure of hospitals, shops, businesses and so on. And doctors should have seen that.

And just as the closure of hospitals will result in far more deaths than covid 19 so the wearing of masks will result in far more deaths than could possibly be saved. Wearing a mask reduces blood oxygen levels. I have seen car drivers with masks on. I’ve even seen bus drivers wearing masks. These things reduce blood oxygen. There will, before long, be a disaster with a bus crashing because the driver was wearing a mask and became hypoxic.

Why else do you think governments everywhere admit that people with respiratory or heart problems don’t have to wear a mask?

And the stupid rules about social distancing were never justified. There was never any science to support them.

Anyone who believes in the twin heresies of social distancing and masks is, by definition, either certifiably insane, a cretin or on the dark side of the human race. Most are left wing, pro EU fascists and believers in the climate change nonsense.

Doctors and nurses who are now waking up to the fact that they’ve been tricked are claiming that they were told that if they spoke out they would be punished.

Well, it’s true that the authorities are punishing doctors who dare to question the official line. I know of a doctor in the UK who was struck off the medical register for questioning the coronavirus story. And in the USA Dr Scott Jensen,a doctor who is also a state senator, is being investigated for making statements about the similarity of the coronavirus to the flu and about the way death certificates were being signed.

And it is also true that simple and effective remedies have been banned or demonised simply so that we could all be prepared for the vaccine.

But if most of the doctors in a big hospital spoke out no bureaucrat would dare to strike them all off the register. If 500 doctors stood up for the truth it would be impossible to take away all their licences.

`I work in a hospital,’ wrote one brave NHS employee. `So far none of the nurses, doctors or domestics has been off sick. And patients with the coronavirus are transported all around the hospital, to X ray, to CT scan and to the ward and yet mysteriously no one gets infected.’

What sort of spineless people are working in health care these days? That’s the sort of excuse popular with lesser war criminals.

Still, looking on the slightly bright side, some of them are waking up and now realise that the coronavirus hoax was exactly that – a piece of political trickery, conceived and executed by people with hidden agendas. The damage done by the hospital closures will be massive. And the mental issues caused by the fear will be long lasting – even permanent. Millions are suffering from severe depression as a result of the lies that have been told. Suicide rates are going to rocket.

Any doctors who are still social distancing and wearing masks outside the operating theatre should be ashamed of themselves. They, like much of the rest of the population, have been made fools of and if they had any professional pride left they would be red faced, embarrassed by their own gullibility and ashamed of how easily they’ve been made part of a wicked conspiracy and made to look like fools.

Now is the time for the medical and nursing professions to stand up and to demand some answers and explanations from the leaders of their professions and from the administrators who gave the orders which have led to tens of thousands of unnecessary deaths.

They should also insist that hospitals are now opened fully and that patients are told that there is nothing to fear.

For although a growing number of doctors now realise that the coronavirus scare is hoax there are still hospitals and administrators who are behaving as though we were in the middle of an outbreak of the bubonic plague.

The latest piece of lunacy in the NHS is for the people in charge to suggest that patients who want treatment at an Accident and Emergency department should telephone and make an appointment.

NHS England’s national medical director has reportedly told the House of Commons health and social care committee that the health service wanted patients to telephone first and be given a timed slot to attend the A&E department.

Patients who are desperate for help, bleeding, in pain, with bones sticking out at funny angles will be expected to telephone and make an appointment to be seen in the accident and emergency department. Triage will, it seems, now be done by teenagers on the telephone. What qualifications will they have? GCSE in woodwork, perhaps?

Distraught relatives will have to telephone and fix an appointment before going to the hospital. Is the plan simply to kill more patients? Did the hospital closures not kill enough?

I will tell you what is going to happen.

Everyone is going to ring for an ambulance. And who can blame them?

As for hospitals, well even the Royal College of Physicians admits that many NHS services will not get back to full capacity for more than a year.

Millions of patients will wait too long. Patients in pain will have to wait for more than a year for treatment. Waiting times will be obscenely long. Tens of thousands will not be seen until it is too late. Tens of thousands of people who could have lived will die.

Around the world the death toll from the hoax will be measured in millions.

Comparatively few will have died of the coronavirus.

The vast majority will have died because they were shut out, abandoned or too frightened to seek help.

And the medical and nursing professions have to take responsibility for all that pain, that sorrow and those deaths.

Doctors should not have accepted the unscientific gibberish behind the coronavirus hoax. Before allowing hospitals to be shut down they should have asked questions. It was never difficult to see that mistakes were being made.

Doctors and nurses betrayed their patients and their professions but they also betrayed themselves.

Too many were happy to accept the weekly applause and the praise when they knew that they deserved neither.

It is time now for the healing professions to make amends.

They should make it clear to the administrators and the politicians that they are no longer prepared to accept the coronavirus nonsense.

They should demand that social distancing be abandoned and that masks should be burned.

They should tell the public that there is nothing to fear.

And they should be prepared to work long hours to clear the backlog of patients as quickly as possible.

There really is no choice.

If doctors and nurses do not stand up then they will be truly unworthy.

This article was originally a script for a YouTube video in July 2020. The video was taken down almost as quickly as it was put up.

Vernon Coleman’s book `Coleman’s Laws: Twelve Essential Medical Secrets Which Could Save Your Life’ is available as an eBook and a paperback on Amazon. His book `Superbody: How to Boost Your Immune System’ is also available as a paperback and an eBook.