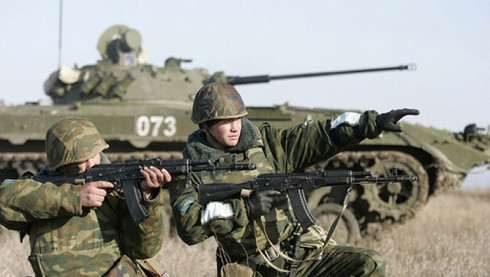 “Even the finest sword plunged into salt water will eventually rust.” Sun Tzu’s Art of War.

CSTO (the Collective Security Treaty Organization) was formed by Russia for the collective protection of herself & the other members of the organization. It is based on a divine principal stipulated by the “ Article 4”. “ Collective Security Treaty (CST) establishes that an aggression against one signatory would be perceived as an aggression against all” . Now the very reason for obtaining the membership of this security alliance would have been none other than a guarantee of security if & when a member state is under attack. This was displayed when the anti government protests in Kazakhstan turned into mob violence. However looking at the ever volatile Caucus front , one would wonder whether the founding principles of the CSTO have any value period.

In 1994 when Armenia joined the CSTO it had good reason to do so. Emerging victorious from the first Karabak war, they needed to have the backing of an alliance to deter any aggression from one of its historical foes – Azerbaijan & Turkey. Additionally Russian 102nd Military Base located in Gyumri, Armenia doubles down on Russia’s commitment towards Armenia.

After the conclusion of the first Karabak war, there have been occasional border skirmishes between Azerbaijan & Armenia. The situation however was nothing compared to what it has become now. Things took a 180 degree turn after the second Karabak war. Ever since Azerbaijan has behaved in hawkwish manner & its president Aliyev’s bellicose statements kept adding to the heat. With a new hostile stance of “ demilitarizing the Armenian militias in Artsakh” his forces have been attacking the republic of Artsakh on a regular basis. Despite the presence of the Russian Peacekeepers , Azeris attacks have increased.

The latest attack however has a distinctly different deviation from the previous once. Azeris have attacked dozens of locations well within the Armenian border. The death & destruction is simply unimaginable. The attacks are unprovoked & purely to create a scapegoat to a pending large scale war. But wait , the CSTO is supposed to come in to the Armeninans aid as per the charter. One of its founding members’ borders has been violated, a hostile military is killing the member states’ civilians & military, and a member state’s total security structure has been jeopardized in an audacious way.

So we should be now seeing the CSTO paratroopers landing on the Azeri-Armenian border to protect its population. At least the ever powerful TU95 bears to fly over the belligerent to deter any further provocations. But they stick to issuing statements. “ Restrain, calm & discuss”. What is the redline the CSTO needs to intervene & safeguard the Armenaians ? 1000 dead Armenians ? An attack on the central square of Yeveran? Attack on the Russian military base?

There is absolutely no doubt that the Russians would not prefer to open a second front when its military is facing difficulties at the hands of Ukranians in the European front. But this kind of cowardice only plays into the hands of its enemies. Losing your credibility of deterrence is the worst thing in the 21st century. When you are humiliated to this degree by a tiny yet arrogant caucus member , how will you stand up to bigger geopolitical foes ?

Ilham Aliyev does not speak Diplomacy & he does not comprehend the language of peace. What he understands is brute force. He has a resolute belief that European powers will not intervene due to his energy partnerships. The Declaration of Sushi signed with Turkey has promised him military aid in case of an attack. So why fear after all. The audacity of the brazen attack on Armenia proper , speaks volumes of his disregard to the CSTO. This begs the question , is it only the fear of a second front that makes the lethargic response from Russia ? Are they in bed with Ilahm Aliyev & Erdogan ?

Russia does not need to bomb Baku to oblivion or open another hot war. But she could show force by different means. By deploying a contingent of the Collective Rapid Reaction Force or the KSOR which was created for this very purpose, they could bring their Caspian fleet closer to Azeri shores. A symbolic show of force would be very well understood by Baku & its patrons.

But if they decide to sit idle & let the Gas king of Caucuses bring mayhem upon Armenians , it won’t be too long that the Turks & Azeris will march on Yerevan & commit another genocide.