1. This is the closest understanding I have seen from a political figure, let alone one who won. DOnald Trump actually got it exactly right a few times, but in shorter strokes. This is great analysis for the first half. The explanation, of being consumer slaves, that may not be correct. I think its more likely it is the classic Marxist constant revolution with a Hegelian God-like state they are after. That state will include select corporate entities which are tools for their hegemony. Corporations like Google, Twitter, Facebook and so on.

She quotes G. K. Chesterton at the end: “Fires will be kindled to testify that two and two make four. Swords will be drawn to prove that leaves are green in the summer.” This is a quote that should make all our blood, clotted though it may be, run colder in our veins. Because now we know what it means. The socialist totalitarian state means everyone will have to lie about everything to everyone, all the time..

This of course, is Giorgia Meloni. And the speech is from The World Congress of Families.

Why do they hate her?

“Because when I am only a number. When I no longer have an identity or roots. Then I will be the perfect slave at the mercy of financial speculators. The perfect consumer.” pic.twitter.com/yiwEevv7V9

2. Reader’s of this site will already know the following. But its still worth stating out loud from time to time.

The entire thing about minorities, women, blacks etc. in politics is of course a total con. The left does not care about any group but seeks to use one to destroy the other while implementing a communist world order. When Hillary Clinton was going on about the importance of electing a woman, the same media parroting her was destroying the most competent female political candidate in the US at the time. Sarah Palin. She had the only state with a surplus and cancelled the Bridge to Nowhere project because it was obviously a pork project with no benefit to the public whatsoever. They destroy any black politician with special zeal if they advocate for freedom and US constitutional values. What the left want, is a communist political leader, and one who has a shield of a PC identity so any attack on policy can be thwarted off with cries of racism etc. This is how Obama managed to do so much damage to America and the world with nearly no interference.

And now we have Giorgia Meloni. The first female PM of a G7 nation and … crickets. Hopefully not on people’s plates. When there is news, check the adjectives, such as in this video.

The OFFICIAL numbers are in. She has the numbers for a FIVE YEAR uninterrupted government. No more of the rapid short terms Italy has suffered under recently.

3. Texas threatens more busses to elite neighbourhoods. (Yet I do not believe they will do it. 50 people to Martha’s Vineyard as a one off doesn’t seem proportional to the hundreds of flights Biden’s handler arranged to Red states full of illegals.)

4. Quadruple-vaccinated Pfizer boss, 60, tests positive for Covid for the second time in a MONTH

Pfizer boss Dr Albert Bourla has tested positive for Covid for the second time in a month.

The 60-year-old — who has been vaccinated four times with his company’s shot — last had the virus in mid-August.

He revealed on Twitter Saturday he had tested positive again but was ‘feeling well and symptom-free’.

Dr Bourla said he had not yet had Pfizer’s new bivalent vaccine which is designed to give higher protection against Omicron variants.

He used his back-to-back positive tests to warn people not to be complacent, adding: ‘While we’ve made great progress, the virus is still with us.’

(South Park is right AGAIN! It IS increasingly hard to tell the difference between news and an advertisement.)

MOSCOW, Sept 26 (Reuters) – A gunman with a swastika on his teeshirt killed 15 people, including 11 children, and wounded 24 at a school in Russia on Monday before committing suicide, investigators said.

The attacker, a man in his early thirties who was named by authorities as Artem Kazantsev, killed two security guards and then opened fire on students and teachers at School Number 88 in Izhevsk, where he had once been a pupil.

(88 is a secret Neonazi sign. It refers to Heil Hitler, as H is the 8th letter so 88 becomes HH. So kinda curious that it was school 88. No idea if there is any connection)

Thank you all for paying attention to this site and being a part of this community. 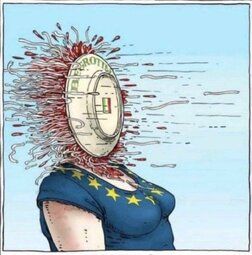