In case you still think it’s a conspiracy theory that our elites want a world order, here’s French President @EmmanuelMacron yesterday at the APEC summit:

And lets speculate about what the order would look like. Well, it would look like supranational orgs like the WHO, UN, WEF and so on, can ride roughshod over all hard won rights and liberties for reasons which are obviously lies to anyone with an ounce of capacity for critical thought. It means the Nuremberg code won’t be worth the paper it’s written on. It means anything you think you own or worked for, you don’t. It means your only responsibility to your children is to raise them according to ever-changing state dogma, and refusal to do so means loss of your children and possibly worse. And it means when they tell you, you are happy, you are, or state supplied suicide is right there for you with no obstacles in the way. Most of this has already happened. So in a way I lied. It isn’t speculation.

2. Annulment of election requested in Brazil 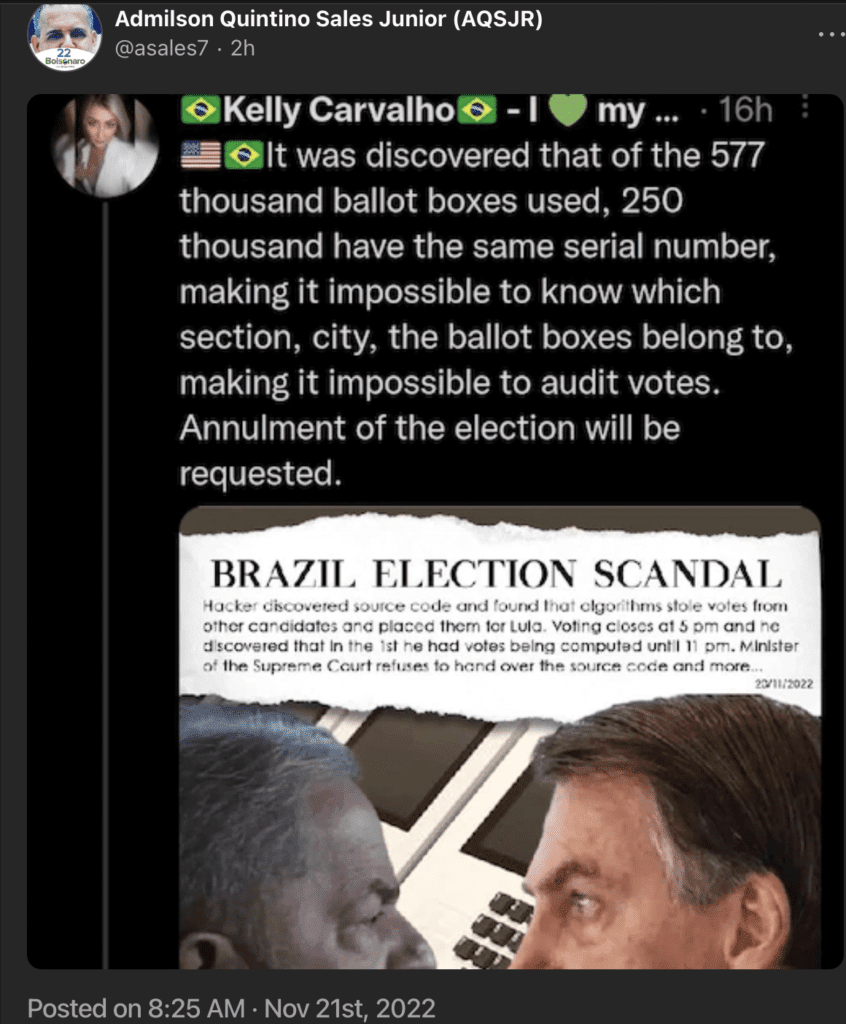 Oh yeah, it also means elections won’t be just illusory, they will be transparently obviously fraudulent so the people all know where they stand. Which is knee deep in sewage, hoping it doesn’t rise above the nose.

3. Please everyone take note: Because of the high volume of requests for a zoom link of the hearings coming up in around 40 hours from now, November 23rd, at 9:00 AM dealing with the College of Surgeons and Physicians and how they have become a dictatorial enemy of medical freedom, they have decided to make the hearings public. Ill post the entire statement right below the link:

Dear Parties,
Due to the volume of requests for the link to the motion hearing, the Tribunal is making the link public. You may distribute the following link: https://youtu.be/xS4A2z4UogY
Please include in any distribution the following message:
NO ONE MAY RECORD, TAKE A SCREEN SHOT OR DISTIBUTE ANY RECORDING OF THE HEARING. IF YOU VIOLATE THIS RULE, YOU MAY BE FOUND GUILTY OF AN OFFENCE AND BE ORDERED TO PAY A FINE OF UP TO $25,000 UNDER S. 29 OF THE STATUTORY POWERS PROCEDURE ACT.
David A. Wright (he/him|il/lui)
Chair | Président

(In the interests of transparency, I think you can look at the proceedings by dipping back and forth to take glimpses of it)

NBC’s Today Show weatherman Al Roker, 68, revealed Friday he has been off the air the past two weeks due to blood clots that landed him in the hospital. Roker, who tested positive for COVID in September even though he has been vaccinated and boosted, said on social media he had blood clots that traveled to his lungs from a clot in one of his legs. In October of 2020 – just days before the presidential election – 51 former intelligence officials signed and published a letter that baselessly decried the contents of Hunter’s ‘laptop from hell’ had “all the classic earmarks of a Russian information operation.” This was a lie.  They all knew it was a lie.

In March, Rep. Matt Gaetz (R-FL) introduced a House Resolution that would strip security clearances from dozens of federal intelligence officials who signed on to the letter declaring the infamous Hunter Biden laptop as “Russian disinformation” shortly after it emerged leading up to the rigged 2020 election.

We have posted videos of her going back years where she explains versions of this problem regularly. Quite a brave thing to do given how close the world is to a global communist authoritarian and totalitarian 1WO.

Thank you all for your kind attention.

Respect must be earned. It cannot be bestowed. I suspect contempt is similar.