2020 was a rough year for the crude oil market. As the energy demand plunged during the global financial crisis, the price of NYMEX WTI and ICE Brent North Sea crude oil futures dropped. WTI and Brent are the two pricing benchmarks for petroleum. Approximately one-third of the world’s producers and consumers use the WTI price while two-thirds price output and requirements on Brent’s price. Nearby WTI futures fell to a record low of negative $40.32 on April 20, 2020, as there was no capacity to store the landlocked oil. WTI had not traded below zero since NYMEX introduced futures in the early 1980s. Brent declined to its lowest price this century when the price hit $16 per barrel in late April. Brent is seaborn crude, allowing for storage on ocean tankers.

Since then, prices have recovered. Brent moved back the $50 per barrel level in December, and WTI reached the half-century mark on January 5. The United States Crude Oil Fund (USO) tracks the price of a portfolio of NYMEX WTI futures. The United States Brent Oil Fund (BNO) follows Brent’s price higher and lower.

On January 5, Saudi Arabia shocked the crude oil market. After agreeing to a 500,000 barrel per month tapering the 7.7 million barrel per day production cut starting in January 2021, the Saudi Arabian oil minister announced his country would cut output by one million barrels per day as a “gift” to the other world producers. The move allows Russia to increase its production. Nearby NYMEX crude oil futures moved above the $50 per barrel level for the first time since February 2020 on January 5. After trading to a high of $52.75, the nearby futures settled at $52.24 per barrel. 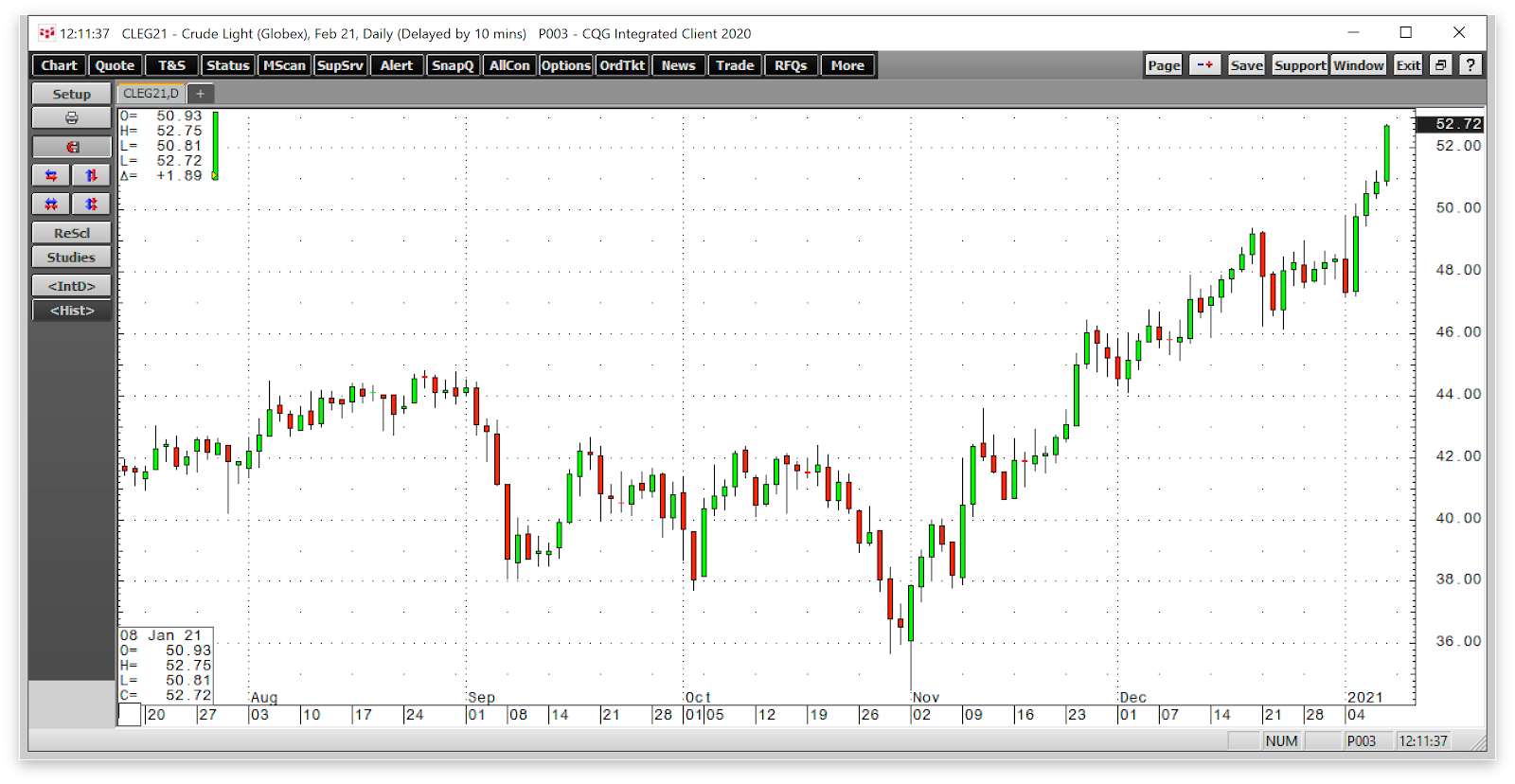 The daily chart of February futures shows the rise from $34.50 on November 2 to the most recent high of $52.75 per barrel on January 8, after the Saudis surprised the market with a substantial production cut.

The Georgia runoff election result is bullish for crude oil

The timing of the Saudi’s move was fascinating as it came on the day of a pair of runoff elections in Georgia that determined the Senate’s balance of power. Democrats favor a cleaner and alternative path towards energy and a shift from fossil fuel production. Republicans have advocated for energy independence through fewer regulations. On January 6, two Democrats defeated incumbent Republicans by razor-thin margins that flipped control of the Senate from Republicans to Democrats. Among many other policy issues, the energy was on the ballot in Georgia on January 6, and climate change advocates won. President-elect Biden’s initiatives will now have a far easier path through the legislature.

US energy policy will shift to the left with stricter regulations for extracting hydrocarbons from the earth’s crust. The bottom line is that US energy production will decline in the coming years as increased regulation will raise the production cost and impede output. Crude oil output rose to a record high of 13.1 million barrels per day in March 2020. That level is now likely to stand as a high for the foreseeable future.

Meanwhile, vaccines that create herd immunity to the coronavirus are likely to increase energy demand in the coming months. As US production falls under the Biden administration’s agenda, the pricing power is likely to shift to OPEC and Russia. Saudi Arabia may have revealed their plans to boost the price of the energy commodity in the coming months. For the oil cartel members and Russia, the mission is the highest possible price for petroleum. Crude oil recovered from the April 2020 low when it fell below zero for the first time. The NYMEX contract reached $30 in May, $40 in June, and $50 per barrel in January. The trend has been higher over the past nine months. At the end of 2020, crude oil put in a bullish pattern on the long-term chart. 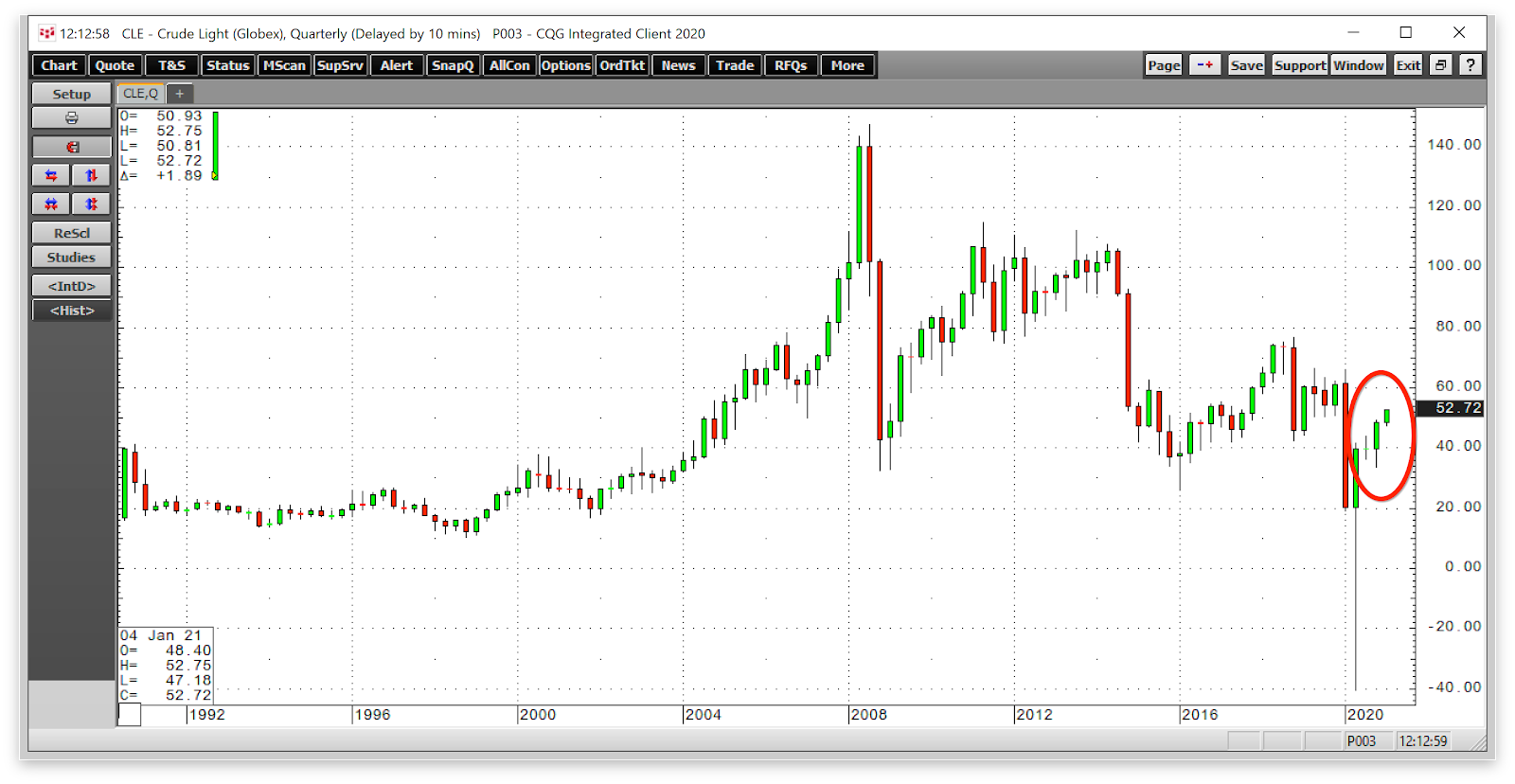 The quarterly chart highlights that crude oil futures put in a bullish reversal in Q4 2020 and has followed through on the upside during the first week of January.

As the crude oil price continues to appreciate, the path of least resistance remains higher. A falling dollar, the prospects for declining US production now that the government is in lockstep with a greener agenda, and the potential for increased global demand as the coronavirus’s threats recede all point to higher prices. Moreover, central bank liquidity and government stimulus are inflationary and extremely bullish for the price of all commodities, including crude oil. The latest move by Saudi Arabia exacerbates the bullish fundamentals. 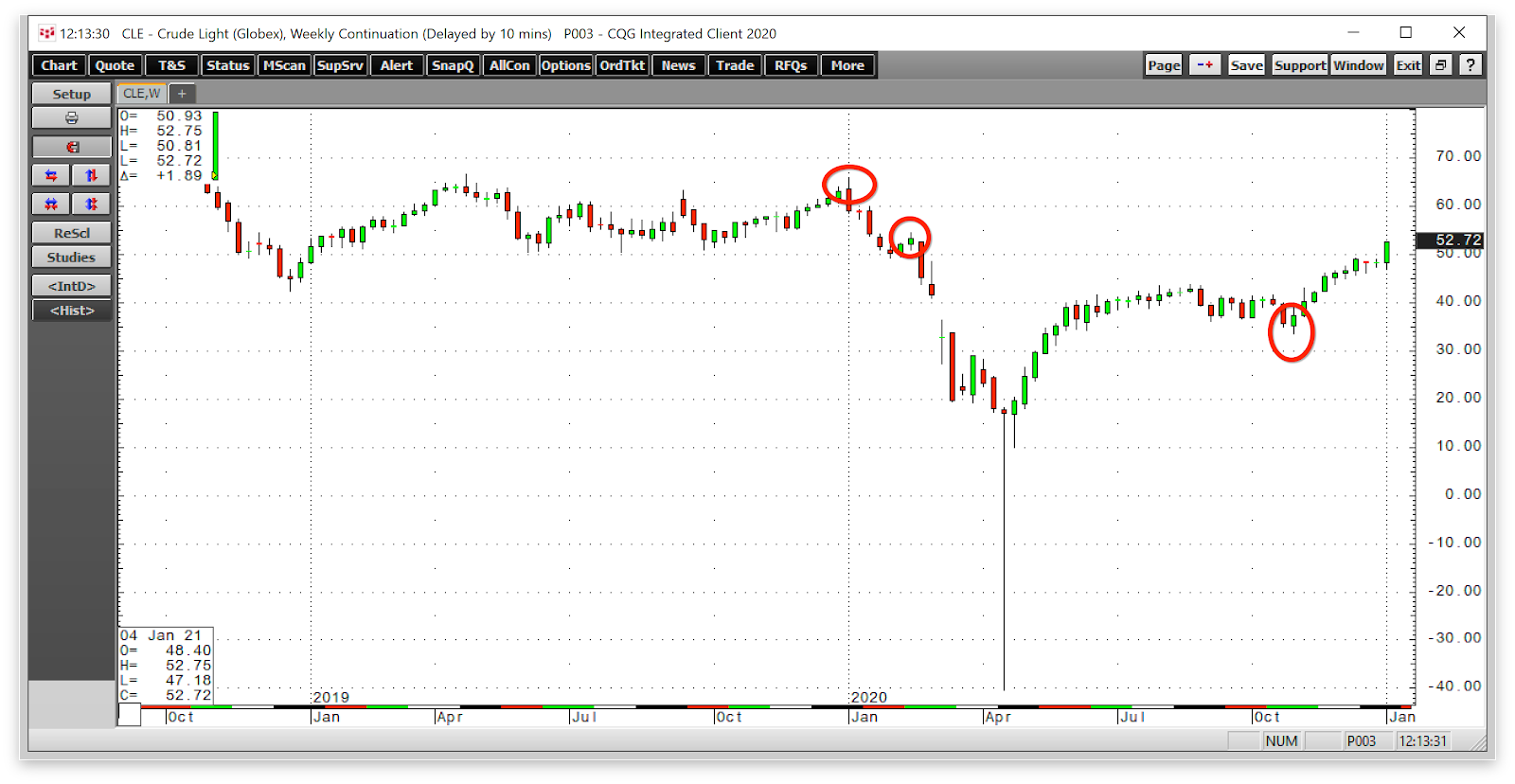 Crude oil tends to take the stairs higher and an elevator shaft to the downside during corrections, as we witnessed in early 2020. At the start of 2021, the energy commodity is on the staircase, and higher prices look like the path of least resistance.

USO currently has an ETF Daily News SMART Grade of D (Sell), and is ranked #72 of 113 ETFs in the Commodity ETFs category.

About the Author: Andrew Hecht

Andy spent nearly 35 years on Wall Street and is a sought-after commodity and futures trader, an options expert and analyst. In addition to working with StockNews, he is a top ranked author on Seeking Alpha. Learn more about Andy’s background, along with links to his most recent articles. More…