The Hourly View for AVTR

At the time of this writing, AVTR (Get Ratings)’s price is up $0.11 (0.34%) from the hour prior. The hourly chart shows that AVTR has seen 2 straight up hours. If you’re a trend trader, consider that the strongest clear trend on the hourly chart exists on the 100 hour timeframe. The moving averages on the hourly timeframe suggest a bullishness in price, as the 20, 50, 100 and 200 are all in a bullish alignment — meaning the shorter durations are above the longer duration averages, implying a sound upward trend.

Currently, AVTR’s price is up $0.52 (1.61%) from the day prior. This move is a reversal from the day prior, which saw price move down. If you’re a trend trader, consider that the strongest clear trend on the daily chart exists on the 50 day timeframe. The moving averages on the daily timeframe suggest a bullishness in price, as the 20, 50, 100 and 200 are all in a bullish alignment — meaning the shorter durations are above the longer duration averages, implying a sound upward trend. Avantor Inc’s price action over the past 90 days can be seen via the chart below. 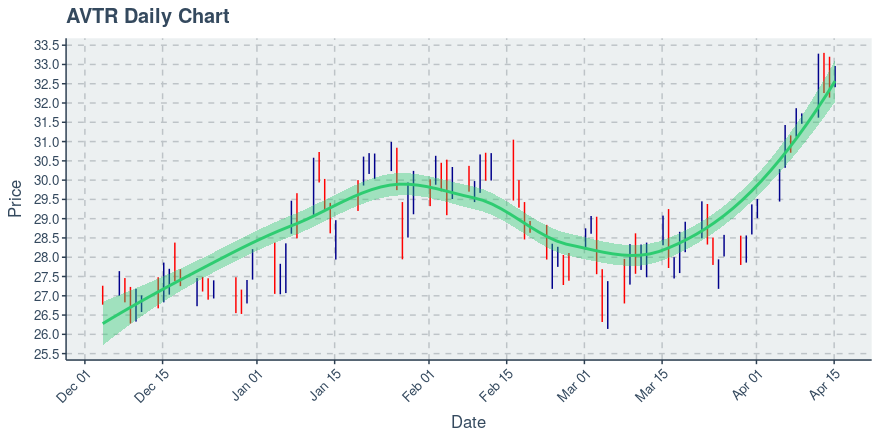 Investors and traders in AVTR may be particularly interested in the following story that came out in the past day:

(Bloomberg) — A top Republican senator on Wednesday formally requested that the Justice Department and the Securities and Exchange Commission probe Avantor Inc. for what he called the company’s “deeply troubling connection” to the U.S. opioid crisis.“I am writing to urge you to conduct an investigation of a publicly-traded American company for its apparent longstanding contribution to the opioid epidemic that killed 50,000 of our fellow citizens in 2019,” Senator John Cornyn of Texas wrote in a letter to Attorney General Merrick Garland and Allison Herren Lee, the acting chair of the SEC.Cornyn is one of the nation’s most influential lawmakers on drug issues, serving for more than a decade on the bipartisan Senate Caucus on International Narcotics Control. He credited an investigation by Bloomberg Businessweek that exposed how Avantor’s Mexican sales of an essential heroin-making chemical, called acetic anhydride, were easily diverted by narcotics traffickers.Mexican drug cartels are the virtual monopoly suppliers of heroin sold in the U.S., where both supply and overdose deaths skyrocketed in the last decade. Cartel chemists also have used the chemical to make methamphetamine.An SEC spokeswoman declined to comment on Cornyn’s request. The Justice Department didn’t immediately respond to a request for comment.In his letter to Garland and Lee, Cornyn likened Avantor’s conduct to that of Purdue Pharma, as he did in an interview with Bloomberg News in March. The now-bankrupt drug maker helped ignite and fuel America’s prescription opioid epidemic with its painkiller OxyContin. Cornyn said Purdue admitted in an $8 billion settlement with the government that it marketed and sold the pills to health care providers “even though it had reason to believe those providers were diverting them to abusers.”Of Avantor, Cornyn told Garland and Lee that “it is simply not credible to believe or argue” that the company “was not aware of the use of its product in Mexico for the production of heroin,” the vast majority of which was exported to the U.S.Avantor has said that it had “no indication that its acetic anhydride product was potentially being diverted to make heroin.” A spokeswoman repeated that statement on Wednesday.Avantor started gathering and destroying all of its inventory of the chemical across Mexico on the day Bloomberg’s investigation was first published last August, before announcing it had ceased Latin American sales. The company has said it followed all appropriate Mexican laws, it sold only to authorized buyers, and its resellers were responsible for their own sales.Since December, the company has repeatedly declined to say whether Justice Department prosecutors have subpoenaed it or otherwise formally notified the firm that it’s under investigation. Cornyn asked Garland whether there are active civil or criminal investigations and, if so, whether Avantor is cooperating. The Mexican Attorney General’s Office launched an investigation last year, but its status is unclear.Read More: Cocaine-Making Chemical Is Curbed After Use by Cartels ExposedBloomberg found Avantor had supplied the chemical to retailers and distributors across Mexico in jugs that were big enough to make lucrative quantities of narcotics, but small enough to load into the trunk of a car. Each of the company’s 18-liter jugs could make 20 pounds of pure “China white,” or about 90,000 hits. Although acetic anhydride is one of the most strictly regulated drug-making chemicals under international narcotics laws, Bloomberg found Avantor sold thousands of its jugs in Mexico, where there was little to no regulation throughout the thick of America’s heroin epidemic. In 2019 alone, its Mexican sales reached at least 21 tons.‘Dangerous Precursor’Reporters uncovered crime-scene photos showing Avantor’s chemicals at narco labs in Mexico’s top heroin-producing regions across the last decade. Distributors said the ready availability of the company’s product was an open secret in Mexico and that it was a favorite of traffickers. Experts also have raised questions about whether the jugs had any significant legitimate use.Cornyn said the company’s Mexican sales should be investigated under the Foreign Corrupt Practices Act. He also said it was “alarming” that the company has yet to disclose in security filings “that a dangerous precursor chemical it produced in Mexico had helped fuel the opioid epidemic in the United States,” which he said “certainly warrants further investigation” by both agencies.Although his letter makes no mention of it, Cornyn’s requests come amid a partisan Senate fight over one of President Joe Biden’s Justice Department nominees who has financial ties to Avantor. Vanita Gupta, Biden’s choice to be associate attorney general, has held a $14.5 million stake in the company that she pledged to sell following questions from Republicans. She also has said she’ll recuse herself from any matters related to the company. Her father, Rajiv Gupta, is Avantor’s chairman.Four other Republican Senators from the Judiciary Committee planned to join as cosigners on the letter to Garland and Lee, according to Cornyn’s staff, including Charles Grassley, who led opposition to the nomination.Cornyn has said he would press for a Senate investigation regardless of whether the Justice Department takes action. The chamber’s narcotics-trafficking caucus, which acts on a consensus basis, has investigative authority.(Updates with company response in eighth paragraph)For more articles like this, please visit us at bloomberg.comSubscribe now to stay ahead with the most trusted business news source.©2021 Bloomberg L.P.