BNO and USO are the crude oil ETF products

Last week, the NYMEX crude oil price for June delivery took the stairs higher towards the early-March high. As vaccines create herd immunity to COVID-19 in the US, people are returning to work and venturing out again. As of May 7, nearly half the US population received either the Pfizer (PFE), Moderna (MRNA), or Johnson and Johnson (JNJ) vaccines.

The gasoline demand, an oil product, has soared. The gasoline price rose from a low of 37.60 cents per gallon wholesale to over $2.12 at the end of last week. The rise in gasoline continues to underpin the crude oil price. Moreover, US output has declined from a record high of 13.1 million barrels per day in March 2020 to below 11 mbpd as of April 30. The shift in US energy policy makes it unlikely that US production will return to its 2020 record high.

The last time crude oil was north of $100 per barrel was in 2014. After trading into negative territory in April 2020, the prospects for a return to triple-digit prices are rising. The United States Fund (USO) and the United States Brent Oil Fund (BNO) are ETF products that track the prices of the two leading crude oil benchmarks. Two-thirds of the world employs the Brent price, with one-third of the producers and consumers using the WTI price that trades on the CME’s NYMEX division.

Crude oil was flirting with the 2021 highs at the end of last week as the price recovered from a correction that took the energy commodity below $60 per barrel in late March and early April.

As the weekly chart highlights, nearby NYMEX WTI crude oil futures traded to a low of $57.25 per barrel during the week of March 22, where they found a bottom. The price has made higher lows and higher highs since the low. Open interest, the total number of open long and short positions in the crude oil futures market, moved lower when the price corrected and has increased as it rallied. The changes in the metric are a technical validation of the bullish price action. Weekly price momentum and relative strength indicators are above neutral readings. Weekly historical volatility at the 29.6% level has been steady, a sign that the energy commodity is back on the staircase to the upside. The first upside target is at the early March $67.98 high, which was only $1.22 above last week’s $66.76 peak. July Brent futures were trading at a $3.37 premium to July NYMEX futures, putting Brent’s price above $68 per barrel.

President Biden continues to follow a progressive policy path in the US. On the campaign trail, he pledged to address climate change by shifting US energy policy from the Trump administration’s “drill-baby-drill” and “frack-baby-frack” initiatives. On his first day in office, he signed an executive order canceling the Keystone XL pipeline project. More regulations are on the horizon, which will weigh on US output.

Meanwhile, as the US presence in fossil fuel production declines, the international oil cartel and the Russians are rising. After years of suffering from low prices because of US shale output, OPEC+ now has the opportunity to make up for lost revenues by pushing the oil price higher for US consumers.

During the week of November 2, nearby crude oil prices were below the $40 per barrel level during the US election. If there are any doubts that US energy policy is one factor for the move to over $66 per barrel, an over 60% increase since Election Day should erase them.

The US has handed the petroleum pricing baton back to OPEC+, and the cartel and its allies in Moscow are positioned to push prices higher.

The first indications of lower US output since the Biden Administration took over on January 20 come from the inventory data from the American Petroleum Institute and the Energy Information Administration.

For the week ending on April 30, the EIA reported US output stood at 10.9 million barrels per day, 16.8% below the March 2020 record high. As output declines, demand is increasing. As of April 30, the API and EIA said crude oil inventories declined by 7.688 million and 8.0 million barrels, respectively. The API reported a 5.308-million-barrel decline in gasoline stockpiles, while the EIA noted they increased by only 700,000 barrels. Distillate fuel stocks fell 3.453 million and 2.90 million barrels, respectively, in the latest report. 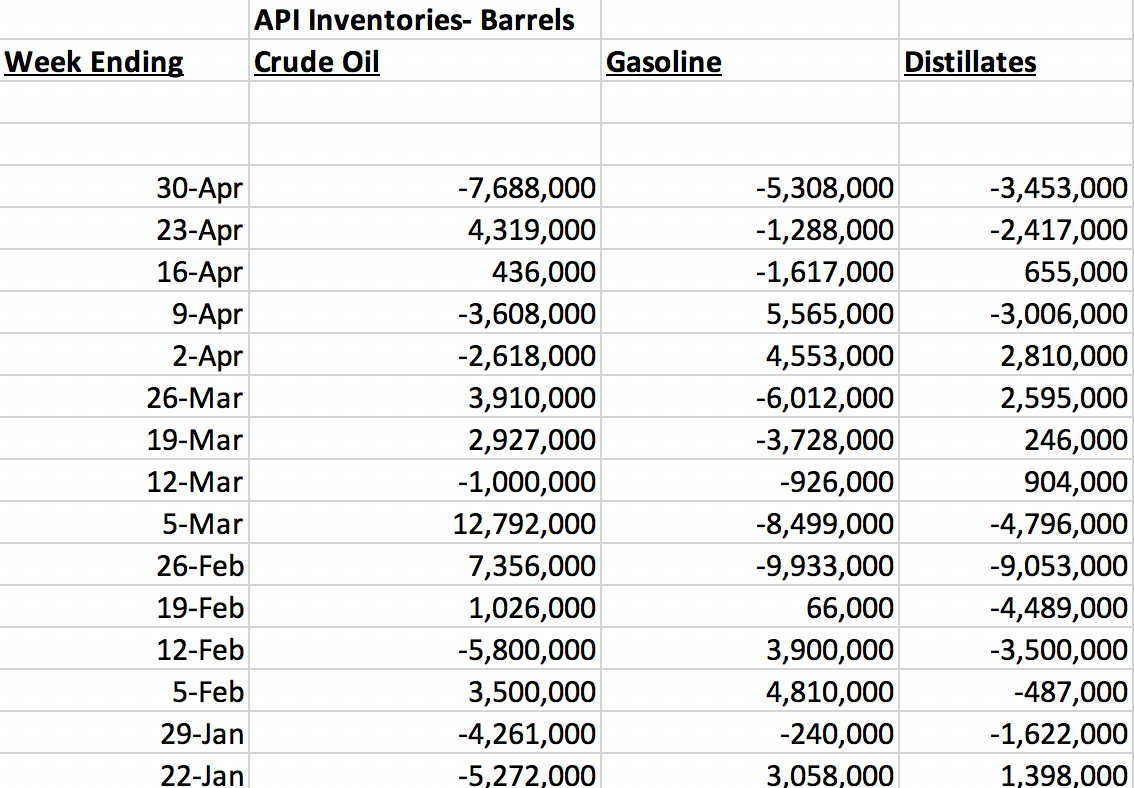 The chart shows that since the week ending on January 22 when the Biden administration took over the Oval office, crude oil inventories may have increased by 6.019 million barrels, but gasoline and heating oil, or distillate stocks, fell by 15.599 million and 24.1215 million barrels respectively. 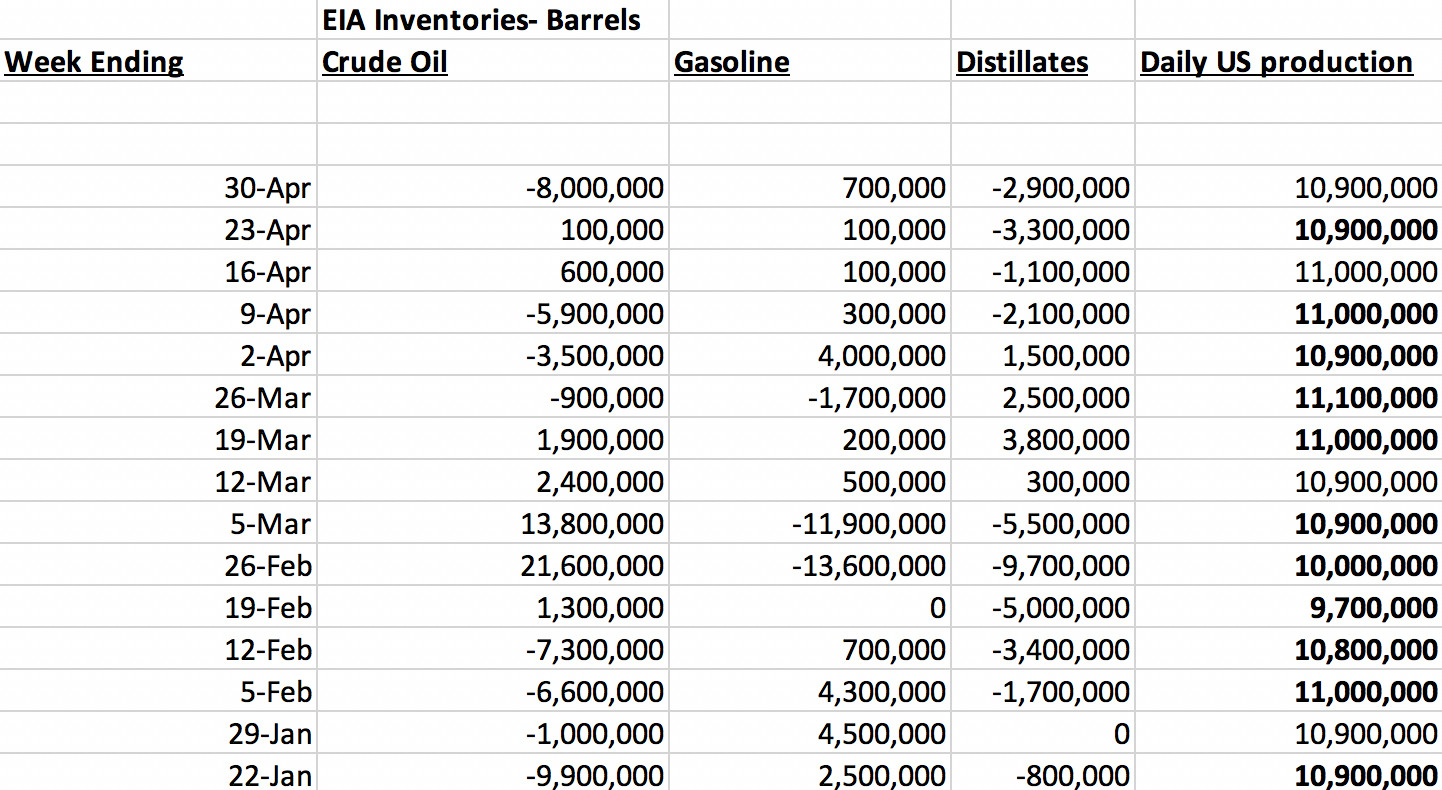 The EIA data shows a decline in all three categories over the same period. Crude oil stocks dropped by 1.40 million, gasoline declined 9.30 million, and distillate stocks fell 27.40 million barrels starting on the week ending on January 22.

Oil inventories support the rising price of the energy commodity.

Crude oil may be taking the stairs higher, but other commodity prices are exploding. The price tag of a year of unprecedented central bank liquidity and government stimulus is inflation. The US 30-Year Treasury bond has been trending lower since August 2020

The weekly chart shows the decline from 183-06 in early August 2020 to 153-29 during the week of March 29, 2021. Around the 158 level at the end of last week, the bonds remain a lot closer to the lows despite the Fed’s monthly $120 purchase of debt securities under the quantitative easing strategy. The bond market is signaling inflation, as are many commodities and other asset prices.

The stock market has exploded to record highs, residential real estate prices are rising at an exponential rate, and raw materials have moved to multi-year or all-time highs.

Lumber futures for nearby delivery recently traded at an all-time peak of $1702 per 1,000 board feet. In March 2020, they fell to a low of $251.50. Palladium, a precious metal that cleanse toxins from the air, traded to a record high at $3019 per ounce last week. Copper, the bellwether industrial metal, reached a new all-time high of $4.7670 last week, as the price surpassed the 2011 record peak on May 7. Copper had traded below $2.06 per pound in March 2020. Corn, soybean, and wheat prices recently moved to the highest price levels in eight-to-nine years.

The bottom line is that the bullish trend in the crude oil market could take the price a lot higher than any analysts believe possible. Goldman Sachs recently said it expects Brent crude oil to rise to the $80 per barrel level this summer, which would put WTI in the high $70s.

The last time crude oil traded at over $100 per barrel was in 2014. The gasoline price was north of $3 per barrel. OPEC+’s increased control of the petroleum market and declining US influence at a time when demand is booming does not preclude a move back to the $100 per barrel and $3 per gallon levels over the coming months.

BNO and USO are the crude oil ETF products

The most direct route for a risk position in the crude oil markets is via the WTI futures and futures options on the CME’s NYMEX or the Brent futures on the Intercontinental Exchange. For those looking to participate in the oil market without venturing into the highly leveraged and volatile futures arena, the United States Fund (USO) and the United States Brent Oil Fund (BNO) are ETF products that track the prices of the two oil benchmarks.

Crude oil is trending towards a challenge of the early March highs as of the end of last week. All signs point to much higher prices over the coming weeks and months.