Gasoline is the most ubiquitous oil product. The fuel is highly seasonal as prices fall during the winter months and rise when the weather improves, and drivers put more mileage on their automobiles. While the US is now moving away from fossil fuel production and consumption to address climate change, gasoline continues to power the lion’s share of cars.

In March 2020, as the global pandemic caused social distancing, forcing many people to remain at home, the gasoline price fell to its lowest level of this century. Nearby NYMEX gasoline futures fell to 37.6 cents per gallon wholesale, a level not seen since early 1999. Since then, gasoline has made a substantial comeback, recently trading at a nearly three-year high.

The most direct route for a risk position in gasoline is via the futures and futures options that trade on the CME’s NYMEX division. The United States Gasoline Fund, LP (UGA) provides an alternative for those looking to participate in the gasoline market without venturing into the futures arena. The prospects for even higher gasoline prices are rising as we head into the peak demand season.

New highs in gasoline and a pullback

The nearby NYMEX RBOB gasoline futures price fell to the lowest level since 1999 when it traded to 37.6 cents per gallon wholesale in March 2020.

The weekly chart highlights that the price found a bottom at the end of the 2020 winter season as the energy demand evaporated during the height of the onset of the global pandemic. The price action since then has been bullish. Gasoline futures recovered to a high of $1.4395 in late August before pulling back to just above 97 cents per gallon, which was a bottom at a higher low. The price then rallied in an almost straight line, reaching $2.17, the highest price since July 2018 in mid-March 2021. Gasoline corrected from the most recent peak and had straddled the $2 per gallon throughout April 2021. The price closed near the $2.07 level on April 30.

The volatile gasoline fell to an over two-decade low and rose to an over three-year high over one year.

Lots of time ahead in the driving season

This year is far different than the same time in 2020. We are now in the early days of the US driving season, the time of the year when gasoline demand reaches an annual peak during the spring, summer, and early fall. At the same time last year, seasonality took a backseat to the virus spreading worldwide. At the end of April, the most robust months for gasoline demand are still ahead. The season will peak during the summer months when people get in their cars and take off on long-overdue vacations.

Seasonality impacts gasoline prices every year, but 2021 could be different. We could be on the verge of an explosive period of demand over the coming months.

Three reasons why gasoline can head a lot higher

Optimism over the end of the COVID-19 pandemic as vaccines create herd immunity to the virus is increasing energy demand. As of the end of last week, over 40% of the US has received their vaccinations. As people return to work and social distancing guidelines are eased, life will return to a new normal. We may still be wearing masks and exercising caution, but the fear of leaving home for work or play is on the decline. The bottom line is that we will be putting many more clicks on our odometers and filling our tanks with gasoline, a lot more than during the summer of 2020.

Three compelling reasons could drive gasoline prices even higher than the most recent $2.17 peak over the coming weeks and months:

More than a few factors point to higher gasoline prices over the coming weeks, months, and perhaps years. Another example from the energy patch is the price action in ethanol, the biofuel that is blended with gasoline in the US.

Nearby ethanol prices were at the $2.33per gallon level at the end of last week, the highest price since June 2014, the year that oil last traded over $100 per barrel and gasoline over $3 per gallon.

The first technical target on the upside stands at the recent $2.17 per gallon high in the gasoline futures market.

The monthly chart shows the upside target stands at the May 2018 $2.2855 peak. Technically, that price is a gateway to the $3 level last seen in July 2014. If robust demand is on the horizon, OPEC+ makes sure US consumers pay top-dollar to fill their tanks, and inflationary pressures continue to rise, wholesale prices above the $3 level are not out of the question over the coming months.

The most direct route for a risk position in the gasoline market is via the futures at the CME’s NYMEX division. For those looking to participate in a bullish move in gasoline without venturing into the futures arena, the United States Gasoline Fund, LP (UGA) offers a solution that trades on the stock market. UGA’s top holdings and fund summary include:

UGA likely holds June and July gasoline futures contracts according to its fund summary as of the end of April. The ETF has $109.525 million in assets under management, trades an average of 71,285 shares each day, and charges a 0.75% management fee. 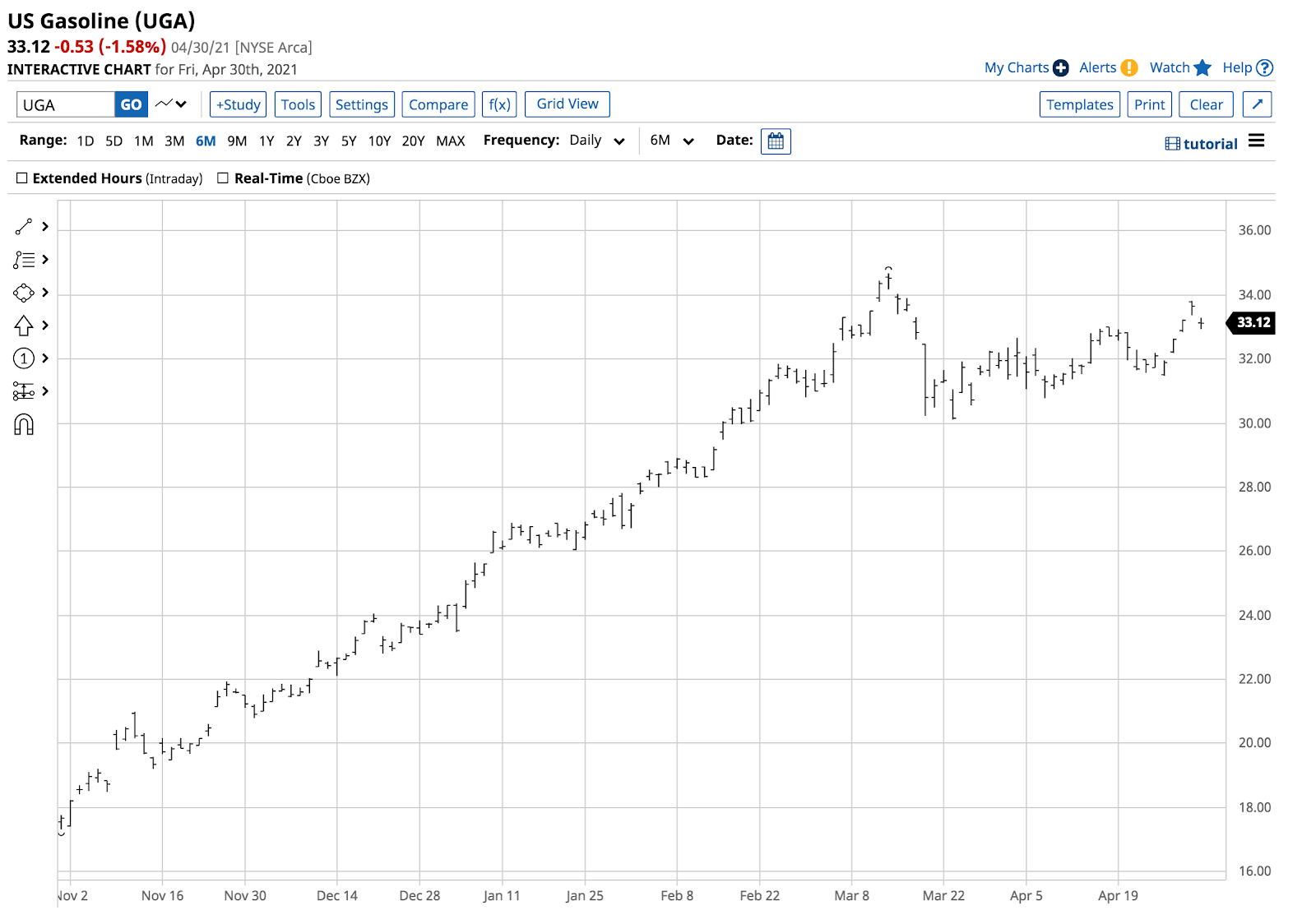 Buying dips in the gasoline market over the coming weeks as we head into the peak season with the promise of robust demand could be the optimal approach to the energy commodity.