Colonial Pipeline, whose system transports fuel across the East Coast said Saturday that it had been victimized by a ransomware attack and that it had halted all pipeline operations to deal with the threat.  Colonial did not say what was demanded or by whom, but ransomware attacks are typically carried out by criminal hackers who seize data and demand a large payment in order to release it.

This presents a new challenge for an administration still grappling with its response to major hacks from months ago, including a massive breach of government agencies and corporations for which the U.S. sanctioned Russia last month.  While there have long been fears about U.S. adversaries disrupting American energy suppliers, ransomware attacks by criminal syndicates are much more common and have been soaring lately.

Cybersecurity is going to become a much bigger long-term cost for businesses.  Just like Rent-A-Rebel is often used to jack up oil prices by bombing a pipleline or pirating an oil tanker – hackers are now added to the arsenal of market manipulators, who can knock entire companies off-line for days.  Brian Bethune, a professor of applied economics at Boston College, also said the impact on consumer prices should be short-lived as long as the shutdown does not last for more than a week or two. “But it is an indication of how vulnerable our infrastructure is to these kinds of cyberattacks,” he said.

Speaking of market manipulation, Elon Musk was on Saturday Night Live this weekend and people were betting he was going to promote Dogecoin and the price of the “coins” went flying higher in anticipation of the event but Musk is always one step ahead and there was more money to be made shorting so instead he took the opportunity on several occasions during the show to poke fun at Dogecoin, pointing out that it started as a joke and going as far as to call the whole thing “a hustle”: 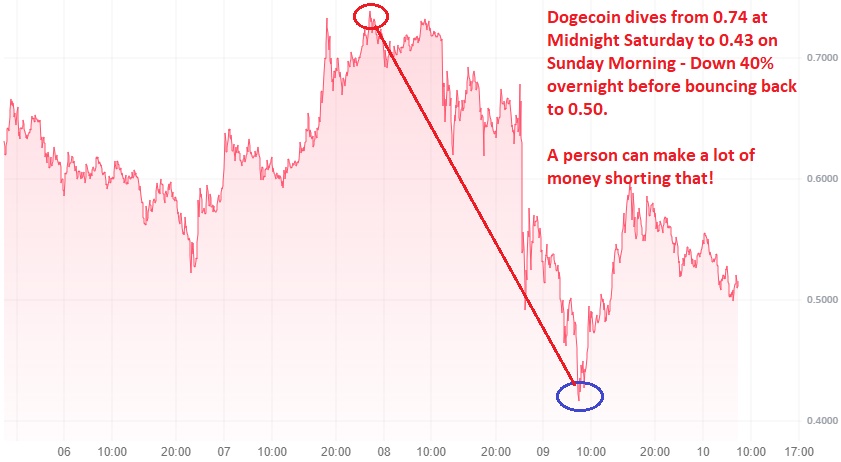 While this all may be hysterical to Elon Musk, a 40% drop over the weekend is going to have a lot of traders waking up to margin calls so get ready for a wild ride this week.  And, of course, Elon Musk will get no more than a slap on the wrist for manipulating the market – maybe nothing at all because no one is really in charge of Crypto and Musk seems to get away with everything he does – even that over-valued car company of his…

When he brought his mom Maye on stage during the opening, she got in a Dogecoin joke. “I’m excited for my Mother’s Day gift. I just hope it’s not dogecoin,” Musk’s mother said. 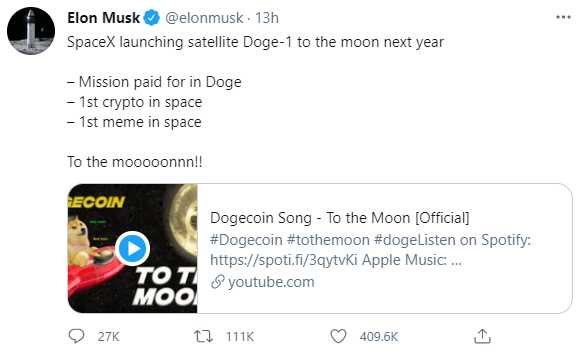 Hahaha, very funny.  Even funnier was Elon Musk manipulating Dogecoin back up last night with this tweet, stating that SpaceX will launch a mission paid for in Dogecoin.  These are the fun kind of games you can play when you are one of the World’s richest men (and don’t care who gets drowned in your wake).

Speaking of rich guys Jeff Bezos, who is everyone’s hero for having $191Bn AFTER getting divorced just spent 0.26% of it on a $500M, 417 foot-long yacht.  And that doesn’t count the cost of the support yacht that has to follow it around – which has it’s own helipad.

In total, there are about 50 boats longer than 100 meters currently under construction.  If anything, demand for extravagantly high-end yachts has outstripped supply. “It’s impossible to get a slot in a new-build yard,”  said Sam Tucker, head of superyacht research at London-based VesselsValue. “They’re totally booked.”  With galas canceled and land borders closed, yachting suddenly seemed the best option for private, socially distanced leisure and a good way to escape from the prying eyes of the public that might look askance at wealthy overindulgence during difficult times. 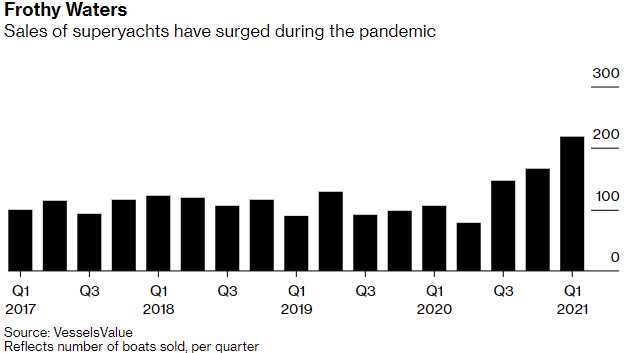 The pandemic put new value on so-called explorer yachts, some of which can cruise for 9,000 nautical miles without needing to refuel, said Aino Grapin, chief executive officer of superyacht-interiors studio Winch Design.  “Clients can enjoy life at sea for long periods of time without having to go mix with others,” she said.  As business closures rendered millions unemployed and global GDP slumped, the world’s richest people added $1.8 trillion to their collective fortune, according to the Bloomberg Billionaires Index. 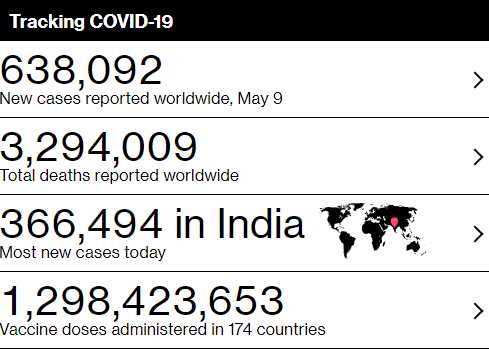 “A drawn-out Covid-19 outbreak will impede India’s economic recovery,” Singapore-based Roache said. “The country already faces a permanent loss of output versus its pre-pandemic path, suggesting a long-term production deficit equivalent to about 10% of GDP.”  With the latest surge caused by a new coronavirus strain, total infections in India have risen to 21.89 million, a third of which were added just in the past three weeks alone. Daily death count hit a record at 4,187 on Saturday. Experts have warned the crisis has the potential to worsen in the coming weeks, with one model predicting as many as 1,018,879 deaths by the end of July, quadrupling from the current official count of 238,270.

There may be 300 less yachts in the World, though – is that really worth it? 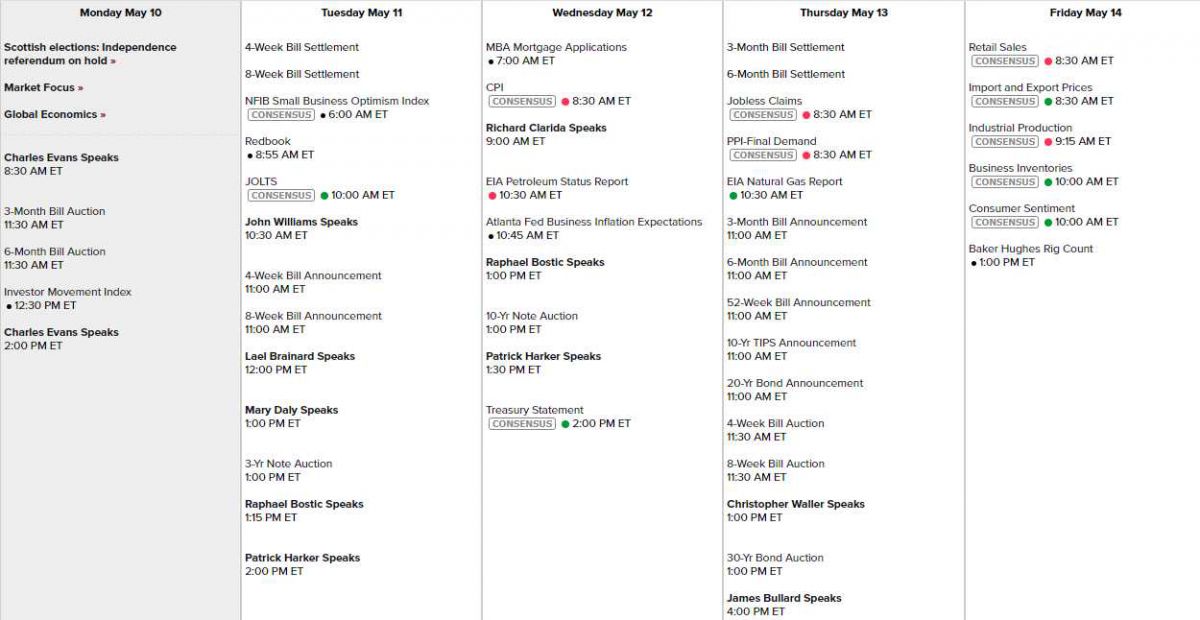 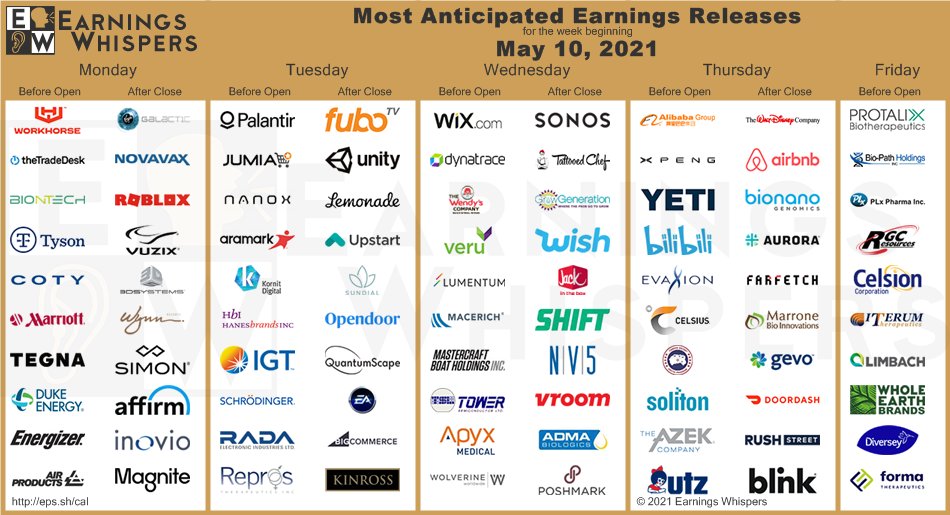