As I write this on Monday, the market is having a bit of a wobble. This appears to be due to renewed fears that the Covid-19 pandemic may not be under control after all. Naturally I have no idea how likely any of the possible outcomes are.

What interests me more is that Monday’s losses – if they are not quickly reversed – have cut the price of the two stocks I’m looking at this week.

This week’s featured stock is toy firm Character (LON:CCT), whose shares closed down by around 5% on Monday. I’ll look at Character in a moment, but first I want to consider utility group Drax (LON:DRX).

Back in June, I reviewed Drax in this piece and concluded that if the shares dropped below 400p, then they would pass all of my screening criteria. At that level, I said I’d consider adding Drax to SIF.

We are now there – Drax’s share price is 394p at the time of writing. So I’ll follow through on my comments from last month and will add Drax shares to SIF and my own holdings after this article has been published.

This £145m group is a business that I’ve followed for a number of years. It’s historically offered high returns on capital, strong cash generation and owner management. Three current directors appear on the list of top shareholders: 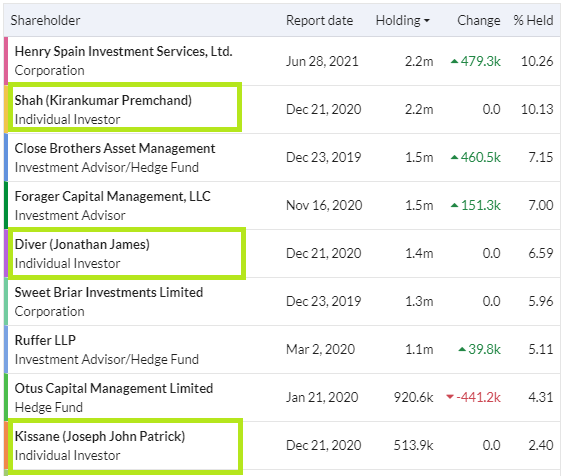 Character has already made one previous appearance in SIF in 2018/19, but this was not entirely successful. SIF’s holding was sold at a loss in August 2019 when Character’s share price crashed following the acquisition of Peppa Pig owner Entertainment One by US toy firm Hasbro.

At the time, Peppa was one of Character’s biggest sellers, but it was feared that the deal would see Hasbro take Peppa in house. 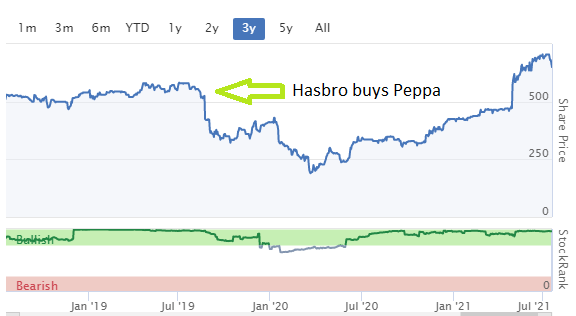 So far at least, this hasn’t happened. Peppa Pig remains a big seller for Character and in January the company said it had extended its current contract for Peppa wooden toys to the end of 2023.

However, the Covid-19 pandemic did initially cause problems for Character. Closed stores during the early part of the pandemic resulted in a sudden shortfall in orders. Fortunately, this situation reversed quite quickly as sales shifted online.

Character has continued to invest in both its own-branded and licenced ranges, and reported very strong sales in the run-up to Christmas last year. Revenue for the six months to 28 February rose by 44% to £74.5m, while pre-tax profit bounced back to £6.1m, ahead of the same period in 2019.

Barring any further unexpected events, I think we can say that this show is back on the road. Should I add this stock to SIF this week? Let’s take a closer look.

Character’s ValueRank of 57 is slightly lower than I might have guessed from the StockRank of 96 (which combines the quality, value and momentum ranks).

There are a couple of reasons for this. One is that profits are still being rebuilt after the disruption of 2020, resulting in an elevated historic P/E ratio:

The other reason for Character’s middling value score is that its balance sheet is light on assets. This means the stock trades at nearly four times book value:

However, there are also several positives.

Free cash flow: As we can see in the graphic above, CCT stock is currently trading at less than 10 times free cash flow from the last 12 months. This looks cheap to me, assuming it’s sustainable. I’ve also verified this figure from the latest balance sheet.

Net cash: Character reported a healthy net cash position around £33m at the end of February. I’d imagine this was boosted by peak season trading, but this company has historically maintained a net cash position:

Earnings yield (EBIT/EV): My screen requires an earnings yield of at least 8%. Character scores well, with a figure of 9.6%. Although this was boosted by £2m of proceeds from property disposals during H1, I estimate that Character would still have achieved an 8% yield without this benefit.

On balance, I’m comfortable with the valuation here, given the group’s strong balance sheet, history of profitability, and improving outlook.

A QualityRank of 98 is pretty impressive, suggesting a business that’s highly profitable. The numbers seem to support this view. Character scores highly on most of the quality metrics I monitor.

Although the group’s operating margin may seem average, Character’s capital-light balance sheet means that returns on capital and equity are consistently high:

It’s worth remembering that the QualityRank score uses multi-year averages to calculate margins and ROCE. So last year’s dip will have less impact on the scoring than you might otherwise expect.

Another quality factor that’s weighted heavily in Stocko’s algorithms is the Piotroski F-score. This fundamental health score monitors the underlying trend for a number of metrics, including margins, cash generation and leverage. You can click on the F-Score on the StockReport page for a detailed breakdown, but the graphic provides an instant snapshot:

Broker forecasts for the next 18 months suggest to me that Character’s profitability is likely to return to historic levels — my sums suggest we could see ROCE hit 30% this year. I’m happy with the stock’s quality metrics, assuming the outlook remains positive for FY22.

A MomentumRank of 88 suggests a positive outlook for Character stock. And I think the outlook is strong, at least for the FY21 financial year, which ends on 31 August.

However, it’s not clear to me if this momentum will extend into FY22. Broker forecasts suggest earnings growth of around 4% next year, which suggests performance is likely to flatten out after this year’s recovery.

One catalyst that may create value for shareholders is a proposed buyback programme starting in September. According to a recent update, the company plans to use some of its net cash to buy back up to 15% of its share capital through a tender offer. Further details will be issued nearer the time, so we’ll have to wait to find out more.

Character has bought back shares before to return cash – we can see from the 10-year balance sheet that the company’s share count has fallen from 24m to 21m over the last decade. Shareholders have not been diluted – another benefit of owner management.

With that context, let’s look at the two elements behind Character’s MomentumRank. 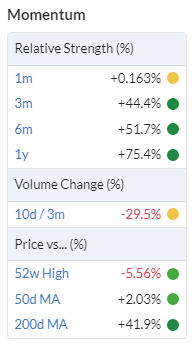 The only negative here appears to be the volume change indicator. This negative value suggests buying has tapered off over the last couple of weeks. But for a small-cap with limited liquidity, I don’t see this as a big concern when the broader picture is positive.

These forecasts don’t yet take into account the effect of September’s planned tender offer. If this goes ahead as expected, I estimate that earnings per share could rise by perhaps 10% from current forecasts, even if profit expectations remain flat.

Consensus forecasts price Character stock on around 15 times forecast earnings, with a dividend yield of 2.2%. However, this figure is inflated by the group’s sizeable net cash balance, which accounts for more than 20% of its market cap.

If we adjust the forward P/E to exclude net cash, the multiple falls to less than 12. That seems decent value to me, given the group’s profitability, proven management and buyback plans. On balance, I think Character shares could still offer upside from current levels.

I’m going to add both Character and Drax shares to SIF and to my own holdings this week, after this article has been published.

Buying two shares in one week is exceptional for me. But with just 14 shares, the portfolio’s cash position has grown to nearly 40%. Adding two more companies will still leave SIF well under its 20-stock limit, so I’m comfortable with this decision.