America doesn’t lose wars – we “withdraw” from them.  It was Sept 11th, 2001 when George Bush started to blame Afghanistan for hijackings of 4 American planes by 19 (out of 21) Saudi nationals and it was Al-Queda that took credit for it, not the Taliban but we attacked Afghanistan anyway and found no chemical weapons but we did kill 71,000 civilians and injured over 500,000 more (and triple that including soldiers)in a country of 40M – so every single Afghani person pretty much has someone they know who’s been killed or injured by Americans over the past 20 years  – and we wonder why they don’t like us….

We invaded Afghanistan in December of 2001 and, by 2004, we had displaced the Taliban and installed a corrupt, puppet Government that lasted for 10 years while the war with the Taliban raged on.  But the Taliban found lots of recruits and we never got rid of them – no matter how many weddings we bombed – go figure… 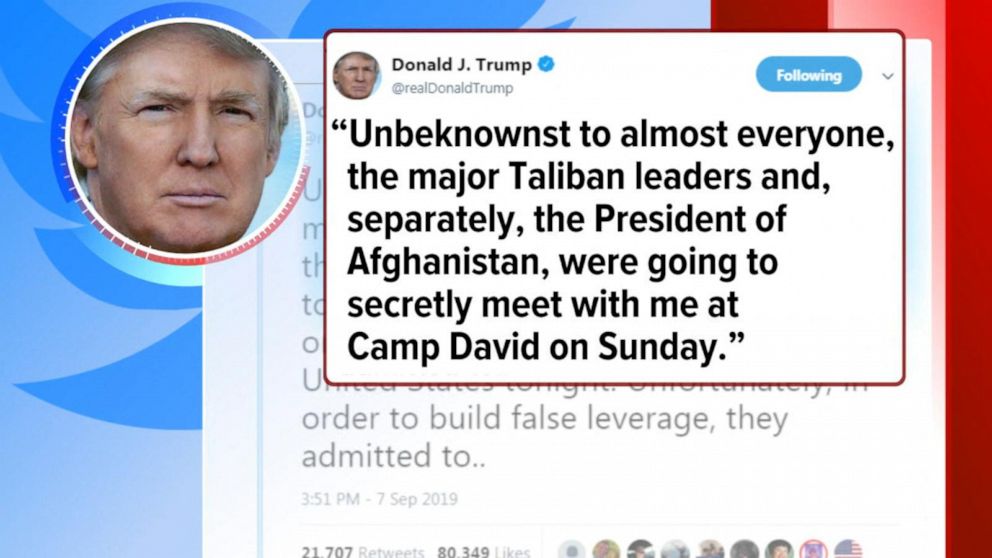 Trump initiated peace talks last November and we were supposed to be out by May 1st but it’s been a little delayed, Biden re-set the deadline to Sept 11th (20 year anniversary) but then changed it to August 31st – so less than 20 years.  The Taliban, however, stuck to the original timeline and started taking over Afghan provinces again in May, starting with Helmand, where all the good poppies are grown.

As of yesterday, they took over the capital and now Biden is sending in 5,000 troops as 30,000 US civilians still need to be evacuated.  But don’t count this as a loss – America doesn’t lose wars…

This isn’t Trump’s loss, this isn’t Biden’s loss, this is America’s loss as we went into this war for all the wrong reasons and we never had a real plan to fix anything.  This war was about oil and massive military contracts for Dick Cheney’s Haliburton (HAL) and other military contractors who made a fortune on it and had no desire to see it end.  The left didn’t want to end it badly enough and the right didn’t want to win it badly enough so we half-assed a war for 20 years and now Afghanistan is run by the Taliban and our problems are just beginning. Does this matter to the markets?  In a normal World it would matter a lot.  This war was all we had back in 2001 and the markets were tanking as America began spending roughly $500Bn per year bulking up the military.  Now we think our $1Tn annual military budget is “normal” – even though the US spends more (and $778Bn is only the hard costs) than the entire rest of the World COMBINED – including our “allies”!

Also, keep in mind that the only reason China feels compelled to spend $252Bn (1/3 of our total) on their military is BECAUSE we spend $778Bn on ours.  Russia spends less than 1/10th what we spend and the Taliban do it for free – all volunteers or, as President Regan used to say “They are like our Founding Fathers!“

Wars also consume a lot of oil (tanks get terrible mileage in the city) and that puts more money into the pockets of the people we’re figthing – as does the heroin and then the morphine we use to get people off heroin is also made from poppies – and the beat goes on.

Speaking of oil, as we expected, oil is taking its mid-August dive.  I said to our Members last Wednesday, after the API Inventory Report:

Oil was net 0 and we’re drifting around $67.50 but I think we’ll break below $65 in the near future.  Biden is asking OPEC to increase supply and, if they don’t, he might us the SPR to dump oil on the market and reduce prices.  We have 621M barrels in the SPR and we import 3.8Mb/d of oil so it’s enough to last us about 6 months and, of course, 70% of that oil comes from Canada and Mexico so the amount of supply OPEC can control would take a year to affect us.  We also have 1.2Bn barrels in commercial storage. We have Fed Minutes this week and Powell is speaking tomorrow and Friday is options expiration day, so plenty to keep us busy.  Empire State Manufacturing already came in at 18.3, almost half of the 30.1 expected and such a steep drop from last month’s 43.  Shipments fell from 43.8 to 4.4!   Tomorrow we get Retail Sales, Industrial Production, Business Inventories and the Housing Market Index.  Housing Starts and Mortgage Applications Wednesday along with the Fed Minutes at 2pm and Thursday is busy with the Philly Fed, E-Commerce Sales, Leading Indicators, and the Services Survey:

And look at all the earnings that are still coming in: 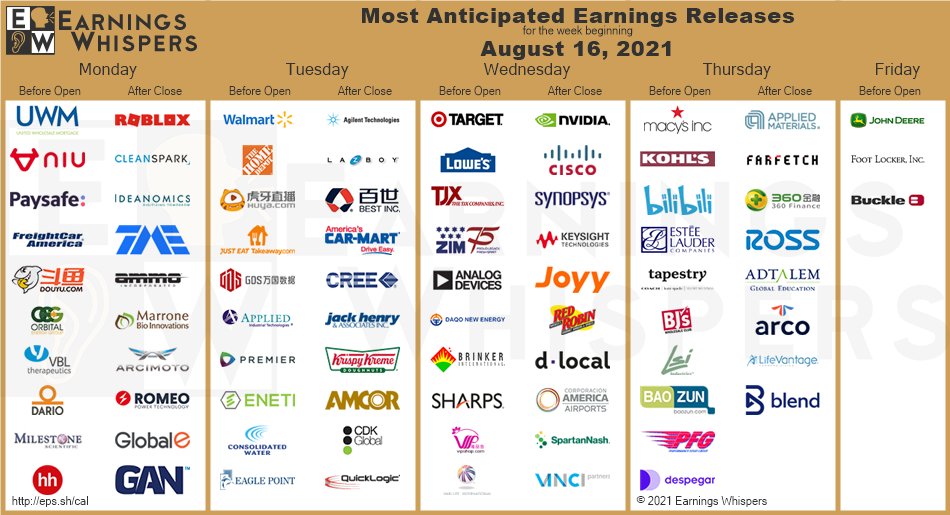 We are doing our portfolio reviews this week and deciding if we want to keep playing in this market or go back to cash – I’m still leaning towards cashing out.

Loading...
"Not by might, nor by power, but by my spirit, saith the Lord of hosts." Zechariah 4:6
BEFORE IT'S NEWS ON TELEGRAM
GET THE TELEGRAM APP - https://telegram.org/ JOIN OUR CHANNEL - https://t.me/BeforeitsNews
Read it..
BEFORE IT'S NEWS
SIGN UP FOR OUR NEWSLETTER
Today's Top Stories
8 Days Until it Happens! Αmerica Will Νever Be the Same Αgain After Τhis (All Revealed) - Must Video
Two Minute Warning: Why Did ABC News Switch Over to the La Palma Volcano Livestream During Jenn Psaki's White House Press Briefing?
Deep State Losses! We Have Rounded the Corner!! - On The Fringe Must Video
Q Truth: JFK Jr., Clones, Secret Military Tribunals & Gitmo Executions! SHOCKING "Behind The Scenes" Insider Intel!
Juan O'Savin and Roseanne Barr: Red October and Other News (Video)
Fraudulent History: Past Reset, Tartarian Empire, Fake Middle Ages, Compressed Timelines (1of2) Sarah Westall 10-15-2021
X22Report: The Fed Cannot Move Forward With Their Plan! The Great Awakening X22 Report!! - Must Video
Greg Hunter: Deep State Cannot Stop Unprecedented Awakening!! - Alex Newman +Must Video
Michael Jaco With CirstenW: Red October Activated! PCR Tests and Vaccines Infected, Shipping Crisis Planned (Must See Video)
“This is your day. This is your celebration. And this, the United States of America, is your country.” …Donald Trump, President Of The United States
Loading...
Featured
About the Amish
New Mel K Joins Truth Warrior Pete Santilli on the New World Order Darkness to Light 10-17-21
COVID-19 Is A Man-Made Virus
Government Would Crumble in the Face of Actual Insurrection! January 6th Was Nothing - Timcast Must Video
The Best COVID Video on the Internet!
Who Is Running the Illegal Government?
The Plan Unfolding Is to Starve Everyone Until You Are Vaccinated! Here's Why They All Got Jabbed - Must Video
Situation Update: The Hunters Become the Hunted! Stew Peters, Mike Jaco, Cristen W Clips - Biden Is Crazy & Responsible for Shipping Crisis - We The People News
Clif High - The Greatest Generation Ever - Must Video
RichiefromBoston: Rob Skiba Dead From Ventilator at Murder Hospital
Loading...
Top Global
Millions of Americans Without Gas! Evergrande Default Is Happening - Fill up Your Tanks Now - Full Spectrum Survival
Pentagon Just Realizes China Fired Hypersonic Weapon Around the World? World News Report Today
Over 80 Volcanos Now Erupting Simultaneously - Our Air Is Getting Foul
Reiner Fuellmich speaks with two LAPD officers who speak to the importance of liberty and right to not take experimental medication
Virus & Vaccine – chicken & egg
UFO resists defense of US Navy ship
Victoria to introduce Chinese style reeducation law to fill its new concentration camps
God Rules – WΟRSΕ THAN ΙMΑGΙNED! EVERGRANDE CΟLLΑΡSE IS SPRΕΑDΙNG! + WION | Gravitas | US Edition – Evergrande misses Payment: Is China Covering Up a Financial Crisis?
Trump update 10/16/2021..Bill O'Reilly asks President Trump why he was able to keep inflation down and why Joe Biden has been unable to
Heroes Don’t Lie To The People - What Is She Running From?
Top Alternative
Top Alert! Newly Uncovered 15th Century Report Now Confirms Western Hemisphere Ruled by Giants! FL Maquis
About the Amish
There is no ‘Rapture.’ Let’s fight Covid-19 World reset, New World Order.
Over 80 Volcanos Now Erupting Simultaneously - Our Air Is Getting Foul
Tesla’s Camera-Based Driver Monitoring System Exists - Pretending it Does Not Makes Roads Less Safe
Virus & Vaccine – chicken & egg
🚨THE HOST/HYDRA (VAXX): AI CYBERNETIC NEURAL IMPLANT; ALLOWING AI TO INTERFACE W/ HUMAN BRAIN & AUGMENT IT.
Baked Apple Cider Donuts (Small Batch)
UFO resists defense of US Navy ship
Let me comment on the Einstein in Roswell story