As we’ve discussed, we are cutting back our positions.

CASH!!! is one of our best hedges against a market downturn and we’ve been reluctant participants in the rally recenty but the combination of resurging Delta infections, continuing (and worsening) supply chain disruptions and a possible end to the constant supply of FREE MONEY that has been propping up the markets is simply a bit too much to stay bullish around – so back to CASH!!! we go.

If this were a one-time, one-off event, I would not be so concerned but Toyota’s (TM) recent problems are the very big tip of the iceberg that we’ve been seeing from miles away.  The Global semiconductor shortage is NOT improving and another wave of Covid doing things like shutting China’s ports certainly isn’t making things better.  The CEOs of various semi companies have just warned us that these shortages will persist into next year and companies only now are starting to actually run out of chips to the point where production becomes impossible.

Chip shortages are like cash-flow shortages.  A company like Toyota makes about 1M cars a month and, like any clever manufacture, they have enough chips for 3 months ready at the factory – in case there’s some kind of supply disrubtion like the one we just had.  Now, the supply of chips didn’t go to zero during the crisis but let’s say they have been getting 30% less chips for the past year – how long does it take to wipe out their supply of chips?

30% less for a year is a 3-month supply that has to come from somewhere and now TM is scraping the bottom of the barrel and they have to simply make less cars until they get more chips.  It’s not that drastic – TM expects a 40% reduction for 2 weeks should be enough but that’s 500,000 cars that won’t be made x $40,000 per car is $12.5Bn but think about the effect this will have on their suppliers and dealers as well.  And don’t forget the nice people who make money financing you car.

And, of course, it’s not just Toyota.  In fact, they are one of the best-managed companies in the World so it’s likely far worse for many of their competitors and many other industries.  The Japanese car maker had touted its ability to insulate itself from the global shortages that burned its peers thanks to stockpiles of components and close relationships with suppliers. At a February briefing, chief financial officer Kenta Kon said people outside Toyota were saying the semiconductor shortages could last through the summer, but he said Toyota’s own people were telling him, “It doesn’t look like it will go that far.”

TM will be down about 3.5% this morning, which is fair when 1/60th of your production is shutting down.  We’ll see if other car companies trade lower or if traders need to wait to hear the actual announcement before cutting back.  This is why we pared back most of our auto holdings – too much uncertainty and this is exactly the sort of thing we were worried about. 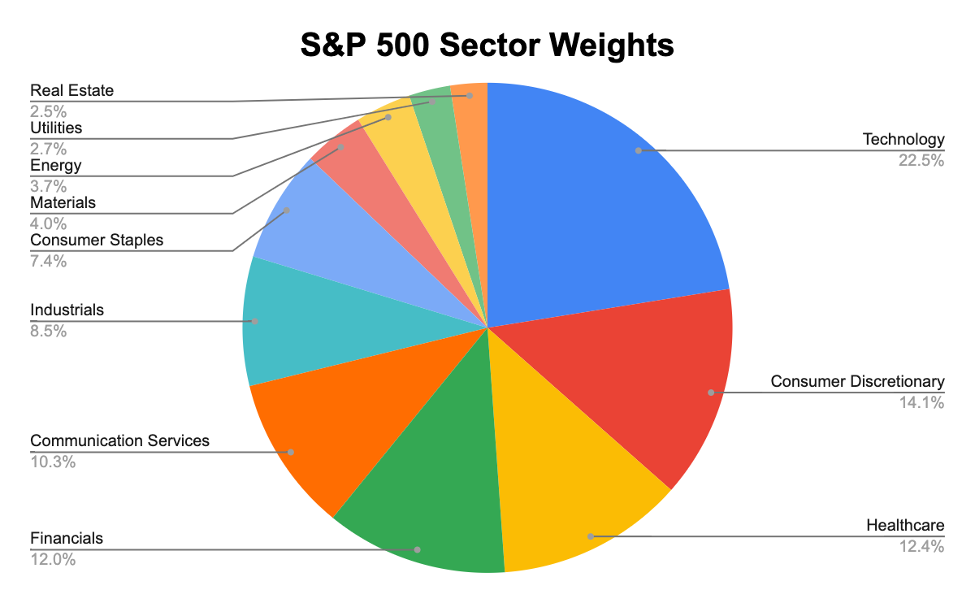 TM is not in the Dow but, out of 30 components (easier to go through than the S&P), the following are likely to be affected by supply shortages:  HON, BA, CAT, MMM, NKE, AAPL, IBM, CSCO, INTC.  So that’s 9 out of 30 and we’re giving comanies like MSFT, CRM and JNJ passes but supply disruptions take many forms.  Like Labor Supply, that is hitting components UNH, GS (just boosted salaries for entry-level staff), MCD, DIS, JPM, WMT (2M employees), VZ….

Those are a lot of hot-points that can be hit by rising costs of goods, services and labor.  Then there’s the threat of rising rates – and the Fed discussed tapering (a prelude to rate increases) in the minutes of their last meeting – which were released yesterday.

Industrials, Communication Services and Technology make up 41.3% of the S&P 500 and they’ve also had the most growth and they are ALL considered by Schwab to be poor values due to their recent runs to record highs NOT backed up by recent earnings growth: In 2008, it was Real Estate, Financials and Energy that were riding high and, to this day, neither Real Estate or Financials are anywhere near their former glory, when they were almost 1/4 of the S&P 500 – but at least Schwab sees some value in those sectors… Speaking of energy, Oil (/CL) fell hard and fast – testing the $62.50 line this morning.  Generally, as we expected, post July 4th Oil began to collapse off our predicted $75 top.  We were short for the first drop but the subsequent run back up caught us by surprise and we’ve since sat out but this ($62.50) should be the bottom into the next holiday (2 weeks) – unless the Dollar gets stronger.  If Gasoline (/RB) hits $2, that will certainly be a good line to go long on. Other than that, it’s a watch and wait kind of day.  The Philly Fed came in ligher than expected (+19.4 vs +23 and +21.9 prior) and we get Leading Economic Indicators at 10 am.  Of course Auto Stocks will be selling off and also watch out for Material Stocks, especially Industrial Metals as iron and copper prices are in decline.

I’ll work out the rest of the indexes later.