Untold Billions of Dollars of property damage is piling up in the Northeast and New York and New Jersey have declared states of emergency while New Orleans still has no power.  Thank goodness we didn’t spend any money to fight global warming, right?  You can get an idea, from this video, how people end up dying in storms like this.

With parts, supplies and labor already short from 2 years of Covid (another thing we chose to ignore), it’s going to be a long, slow recovery along the hurricane’s path of devastation and this is only an “I” storm – Rita was an “R” on September 18th, 2005 and Maria was an “M” on September 27th, 2017. Global warming heats up the sea and gives hurricanes more energy, that’s basic science.  More powerful storms more frequently lie in our future so maybe rething buying homes in low-lying areas. Unfortuntately, in Northeastern Cities, stores and restaurants tend to store their goods in the basement and the economic damage from a storm like this can be devastating.

Central Park experienced 3.15 inches of rain in one hour Wednesday evening, the National Weather Service said, the highest amount on record. The service urged people to move to higher ground in light of the “extremely dangerous and life-threatening situation.”

In New Jersey, Gov. Phil Murphy declared a state of emergency effective immediately and called on people to stay off the roads. Newark Liberty International Airport said it had suspended flights and diverted passengers from ground-level flooded areas.

It’s a big data day but not many people will be on Wall Street to trade it.  We have Motor Vehicle sales, which are likely to show a slowdown in August, Jobless Claims, Productivity (and Costs) and Factory Orders ahead of tomorrow’s Non-Farm Payroll Report.  That should give us plenty to chew on into the weekend as we survey the damage from the storm (Ida is over Boston this morning).

None of this will stop the markets from going higher, especially if it’s going to be a low-volume day.  The money will still pour in and, if there’s no particular reason to sell – up we go.

Productivity came in a little low at 2.1% vs 2.4% expected and 2.3% in the prior report.  Unit Labor Costs were 30% higher than expected at 1.3%.  The way Unit Labor Costs work is that they reflect a 3.4% increase in the cost of Labor and a 2.1% increase in Productivity (what that labor produces).  It’s a quick indicator that margins are tightening in Corporate America and not very “transitory”.

Hours worked went up 6% and that indicates a persistent labor shortage, which is likely to put more upward pressure on wages.  Also consider all the non-productive training time as companies scramble to hire new workers.  Even finding employees incurs a cost.

Still, nothing seems to stop the market and we’ll be looking for more defensive long positions – just in case we never pull back.  It’s been an epic rally so far but it simply isn’t matching the underlying economy, is it? 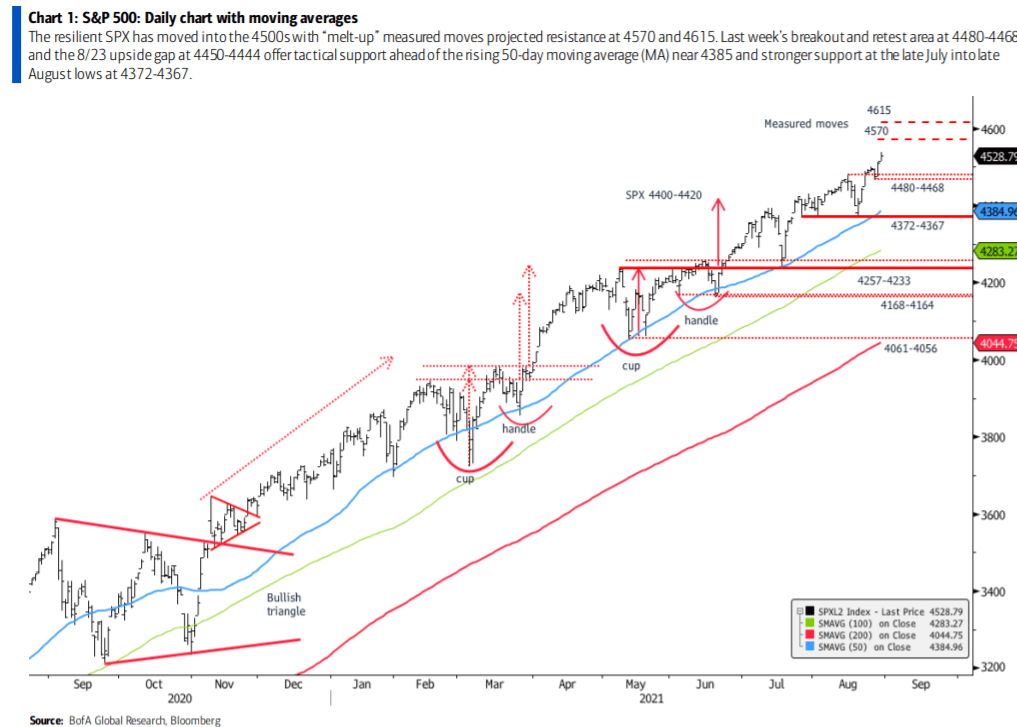 Move along folks, nothing to see here….