We got the strong bounce I was looking for yesterday and it’s continuing into this morning. The big resistance overhead is again around that 4700 zone where the falling green trendline is at. That would be the ideal short in my opinion as it should be a B wave up of some degree with the current all time high to the bottom yesterday finished the A wave down.

Maybe it goes a little higher, or maybe it falls a littlie shy, I don’t know? Nailing the exact level is just not possible (without a fake print at least, and even those will overshoot).

But after this bounce is finished the C wave down should start, and it will likely be a 5 wave move just like the A wave was. There could be (very likely) smaller waves inside those 5 waves too, but my downside target for this C wave will be below 4500 when finished. A typical C wave should go either 1.5%, or more commonly 1.618% in total length. 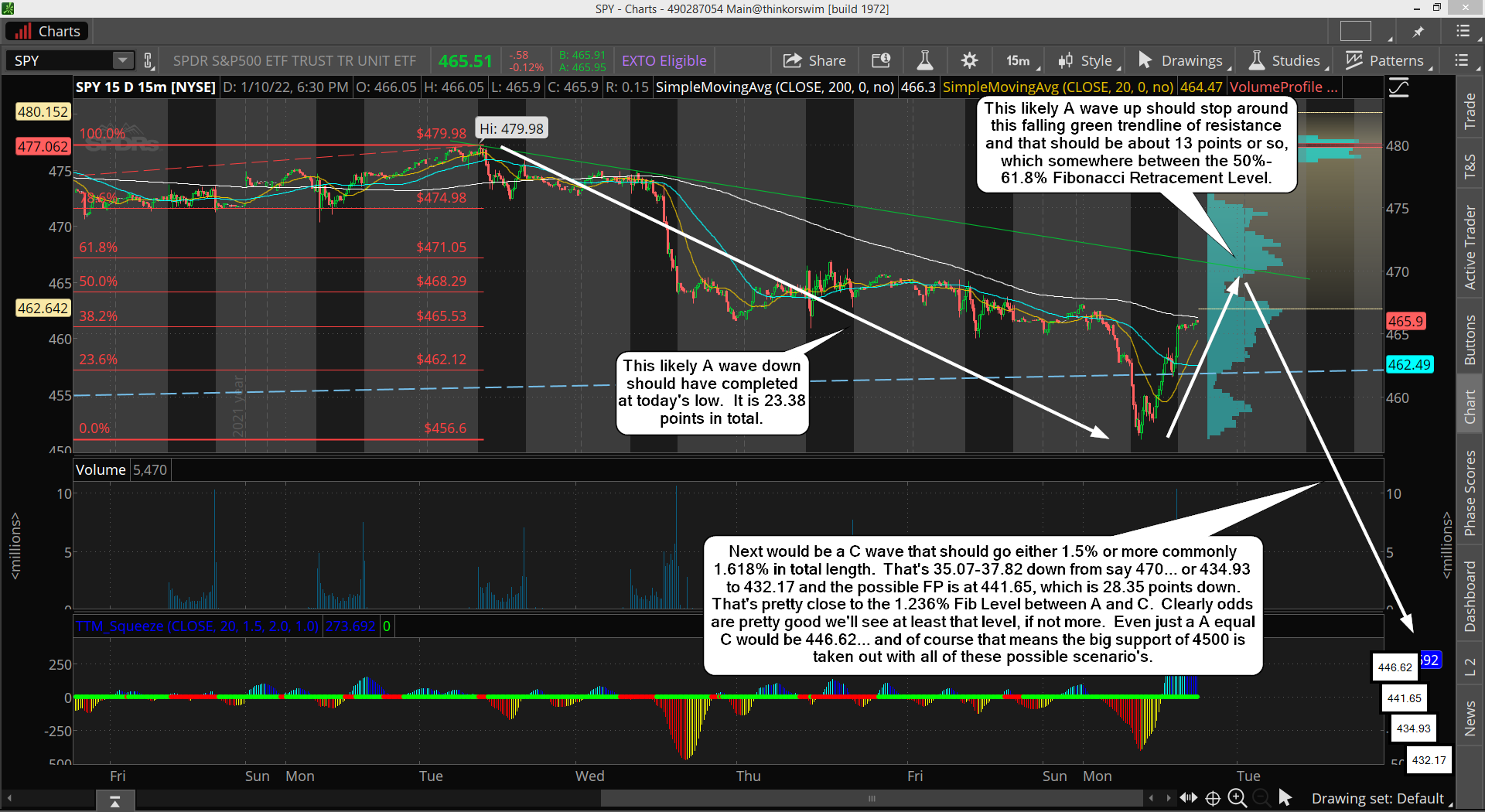 After that we should start the big rally up into mid-March toward 5000 ES/SPX. I do believe there is a “chance” that when we get to that level in mid-March we “could” see a cycle inversion. I currently think it will turn down hard and drop to at least 3700, and possibly as low as 3000… but, and this is a “big but”, there is a chance that it inverts and instead of dropping 1300-2000 points we flip and continue higher into June/July for a massive blow off top of 6000 or more. I just want to point this out as “possible” as we all know a blow off is coming, but we don’t know the “when” part yet?

I’ve been repeatedly talking about the presidential cycle for awhile and pointing out that late 2023 to early 2024 is the likely time where a major turning point happens. It’s extremely common and well documented (back to at least Ronald Reagan) that the time when one president leaves and another enters there is a major turn in the stock market.

Currently I’m expecting an all time high as bozo biden leaves but I can’t rule out a great depression low either. For that low to happen though we’d need the mid-March “cycle” turning point to invert and instead of dropping into June/July low, (which would then be followed by a mega rally to 6000+ into 2023/24), we get this blow off rally high. That would then be followed by the 70-80% drop into 2023/24 and make this presidential cycle a bottom instead of a top. We’ll cross that bridge (as the ol’ saying goes) when we get there.

But let’s NOT be closed minded here as we could see this happen. Right now though I currently favor a top in mid-March around that 496.36 FP on the SPY (around 5000 SPX/ES) and drop into June/July… and then the top over 6000 into 2023/24. Short tern, I’m just looking for this 4700 area today as I said, which should end the B wave bounce. Have a blessed day.