This post The Deep State Is Sadistic appeared first on Daily Reckoning.

Remember the old days of the Clinton administration?

It came to power riding a center-left push against the messes of the Bush administration. Clinton was careful to distance himself from the crazies with a series of high-profile rebuffs of the worst among them.

The hope was to advertise as a moderate but govern slightly to the left.

But then the polls and the markets started to speak, and loudly. The Clinton White House was highly sensitive to them. The president himself was said to have cursed the bond market more than once, demanding to know who precisely was running this country, himself or bond traders?

Nonetheless, the administration responded to all inputs. The federal budget did not expand dramatically. Indeed the budget was temporarily balanced. And then welfare itself was reformed to cut it out with the generous benefits for sheer laziness that had characterized the welfare state since the 1960s.

An economic boom commenced and these days people look back rather fondly on the whole experience, choosing only to remember the president’s dalliance with an intern.

The single strangest feature of the existing regime is how utterly impervious it is from input from either markets or polls. The polls are showing the Biden regime at an 18.1% split between disapproving and approving.

These are composite numbers. Some polls show a situation much worse. I take it as axiomatic that one-third of the public will believe anything, no matter how stupid. We are approaching that level in terms of job approval.

Meanwhile, the markets are in solid bear territory. A new survey from an insurance company shows that 93% of Americans have taken up second and third jobs just to stay ahead of the inflationary trap. JPMorgan has a new poll of medium-sized business owners that shows an unprecedented level of pessimism about the future.

What is going on right now is revealed in the following chart that shows household income declining even as debt service as a percent of income is on the rise. That is a crucial moment in modern economic history. It reveals the current impoverishment taking place. 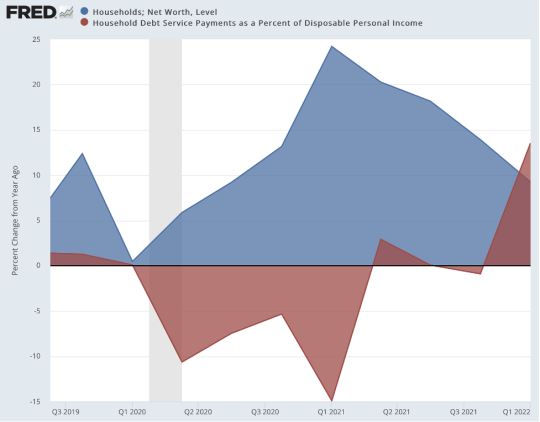 It also reveals an amazing trick. Government gave everyone money and then took it away. Many people have just dropped out of the workforce. We are still not up to the old levels of labor participation. Meanwhile, people are maxing out their credit cards, even as the more well-to-do are taking on new mortgages in hopes of paying them back in cheaper dollars.

What’s more, we are looking at 2½ more years of this hell. There seems to be no chance of turning the corner, not so long as Biden denies that inflation has anything to do with money printing, even as the administration continues to inveigh against fossil fuels while suggesting that instead, we live off the wind and the sun.

And even given all of this, we are seeing no change from the top. They are blind to it all. The 30-something Ivies who work there are so convinced of their insane ideology that they are pressing it no matter what. They are behaving like Bolsheviks in 1920, thrilled for their revolution, clinging to power and utterly disregarding the sufferings of the people at all levels of society.

It’s a sadistic state, one that seems to thrive in direct proportion to the pain it inflicts on the American people.

I was just on a radio show in which the host made a speculation. He said that the Biden administration is literally seeking to destroy the American middle class, and this is for two reasons.

First, they want to punish people who voted for Trump and see them suffer forever for having done so.

Second, they want to gut the middle class and promote dependency and demoralization to stop it ever from happening again.

I usually resist the kind of interpretation that relies on pure malice versus sheer stupidity. But in this case, I simply cannot shake off and dismiss this opinion. Evil does exist. It explains a lot. It is not necessary to believe that government has our best interests at heart but just gets confused at how to promote them.

I’ve never been a Trump superfan but I still struggle to understand what’s called Trump Derangement Syndrome. It’s a real thing and is truly boundless.

However, the other day I ran across an interesting fact of history that could account for the unmitigated hate. Three months before Trump left office, he passed Executive Order 13957. The purpose was to create a new category of federal employment called Schedule F.

Schedule F employees could be fired by the president. They would no longer have civil service protection due to their positions as policymakers and influencers.

The executive order demanded a thorough review of all federal employees to see who would qualify. Only one agency responded in time before the election was called for Biden and concluded that it would pertain to 88% of its employees. In other words, this action would have gutted the power of the administrative state.

It would have been the biggest change to hit Washington in 100 years. Absolutely astonishing. What was Biden’s first action in office?

You guessed it. He issued a new executive order reversing this one. He saved the deep state. None of this made the news, but you can be darn sure that it was a HUGE deal in the belly of the beast. Imagine the CDC, IRS, NSA, CIA, FDA, DOJ and so on all subject to normal standards of hiring and firing.

That would have gone a very long way to ending the tyranny in America. It absolutely had to be stopped. The point is that Trump with this order raised the stakes enormously. He figured out the problem and the solution. They must never allow it to happen again.

This is why they are behaving this way, like cornered rats. They will do anything to prevent something like this.

I’ve never been one for the theory that the election was stolen, simply because I don’t have enough information to say either way. But I will say this. If there ever were an election to steal, this would have been it. The entire deep state stood on the precipice of dismemberment.

So yeah, plenty of people would have been willing to take the risk.

We live in exceedingly dangerous times, with multiple beasts on the loose looking for wealth and liberties to devour. They are proving themselves impossible to train or deter, no matter how bad it gets out there.

They really are sadistic.

Jeffrey Tucker
for The Daily Reckoning

The post The Deep State Is Sadistic appeared first on Daily Reckoning.

This story originally appeared in the Daily Reckoning