All three companies have certainly benefited from strong momentum over the last year. But is this thesis still valid? This week I want to take a fresh look at these firms, to follow up on our coverage earlier this year:

Before I do that, I think it makes sense to check in quickly on conditions in some of the key markets in which these businesses operate.

Oil: The price of Brent crude oil has fallen by nearly 10% to under $90 per barrel over the last week. US WTI crude oil is now under $80, after a similar fall. 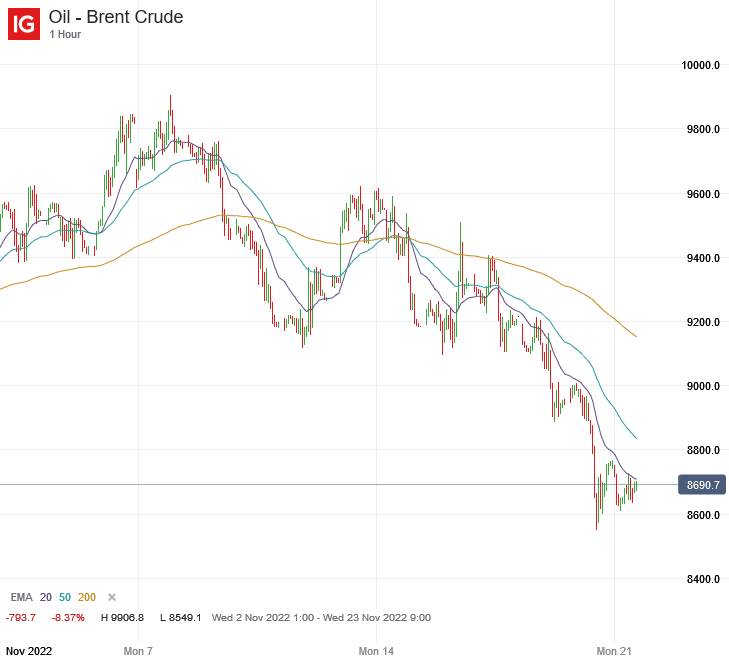 Other commodities: More broadly, the last year has seen the price of iron ore return to pre-pandemic levels. 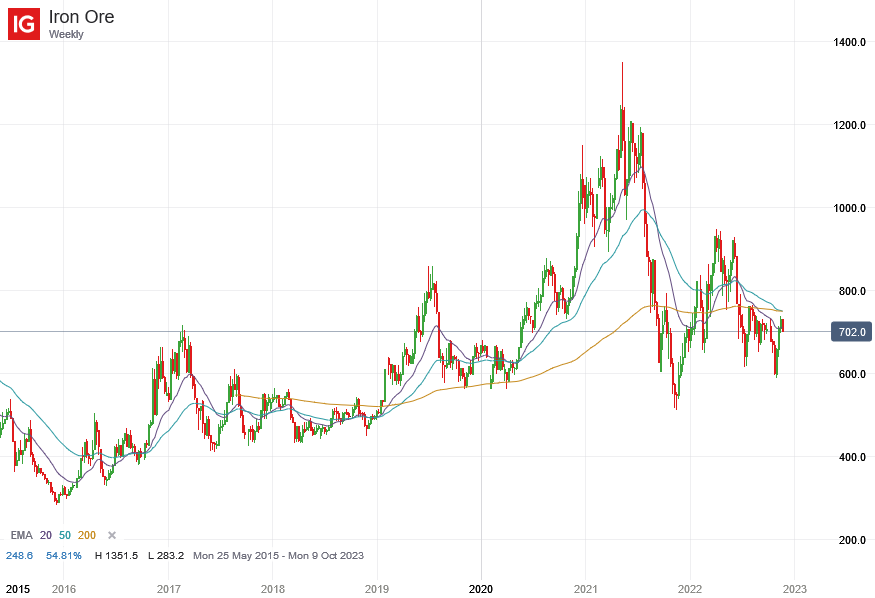 Copper, natural gas and gold are also well down from their pandemic highs, although they remain elevated compared to 2019. 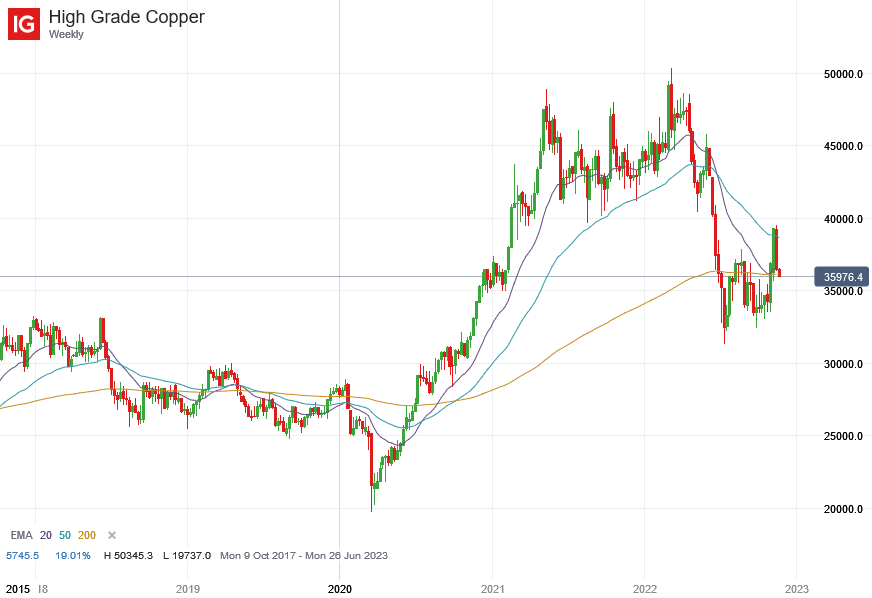 Inflation: lower energy costs appear to be feeding into inflation data. US inflation fell to 7.7% in October – the fourth consecutive month of decline. 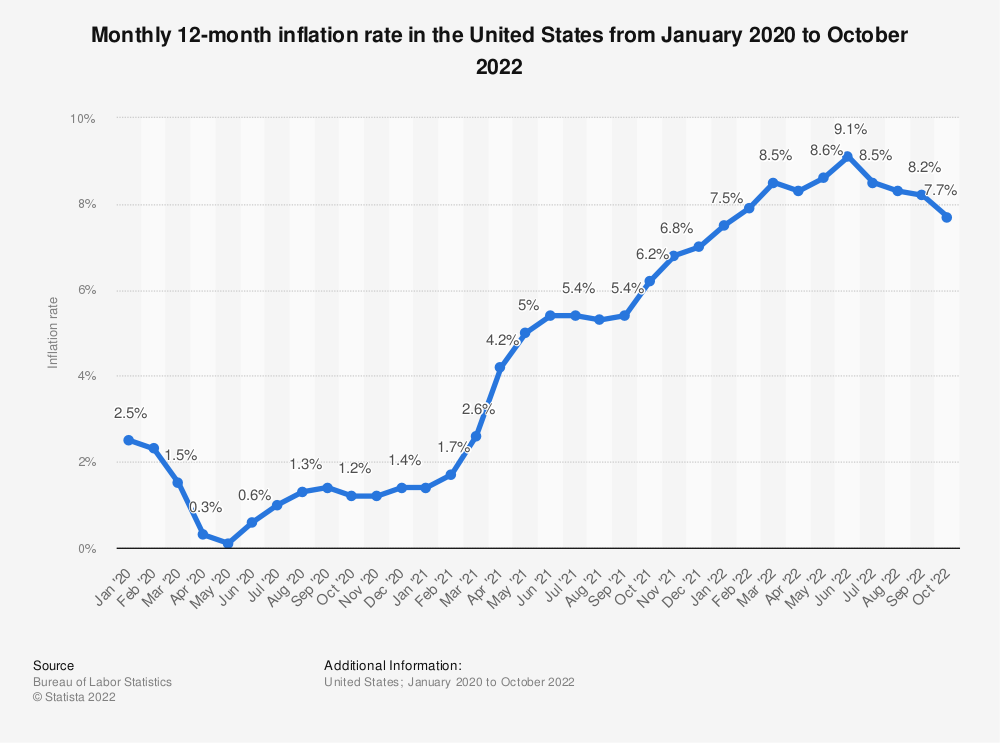 Ukraine: The war in Ukraine is continuing, but fears of escalation appear to have eased, despite Western powers’ continued commitment to provide military supplies.

Normalising? Dare I say it – but market conditions may just be starting to normalise. On this basis, it seems like a good time to revisit these popular FTSE 100 stocks.

Recent trading updates have remained positive, but if market conditions are changing, can these stocks really still have strong momentum today?

Summary: Defence contractor with activities including shipbuilding, aircraft and cyberwarfare. BAE’s three largest markets by revenue are the USA (2021: 43%), UK (20%), and Saudi Arabia (12%). Together, they account for 75% of sales.

Recent trading amp; outlook: BAE recently announced that it had been awarded a £4.2bn contract to build a further five Type 26 frigates for the Royal Navy. The news was included in an upbeat Q3 trading statement confirming the group’s full-year guidance.

The exact result will depend on the USD/GBP exchange rate, but year-to-date average numbers provided by the company suggest that sales could be 7%-9% higher, with underlying earnings up by 11%-13%. Free cash flow is expected to be over £1bn.

CEO Charles Woodburn reports “good operational performance” and “strong order intake”. By 15 November, 2022 order intake totalled £28bn. This is a material increase from c.£21bn in both 2020 and 2021.

Comments: The expected increase in defence spending triggered by the invasion of Ukraine now appears to be flowing through to BAE’s order books. The firm’s balance sheet and cash generation look comfortable to me. I’m confident the group’s 20-year plus dividend record will remain safe.

What’s more difficult to decide is whether BAE still offers value. The shares have hit a succession of record highs this year: 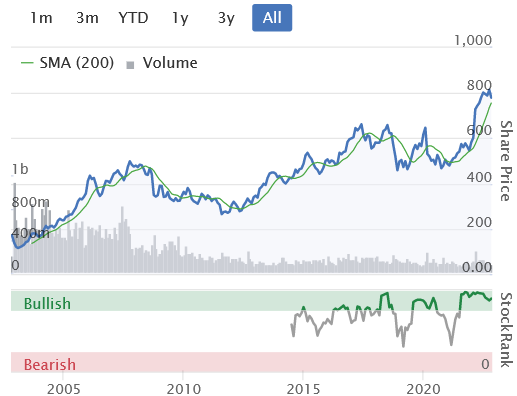 However, the increased valuation has been supported by rising earnings estimates: 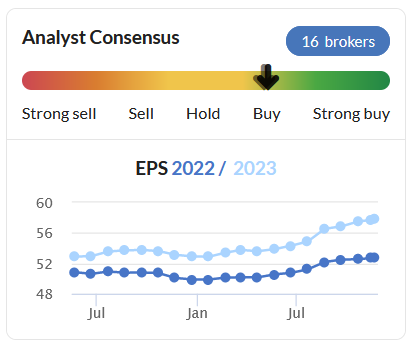 As a result, BAE shares do not look wildly expensive at current levels, on a forward view: 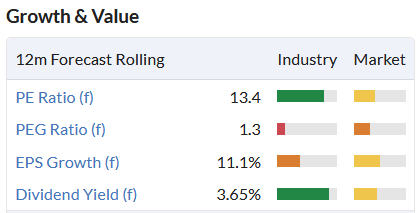 However, this business has only generated modest returns on capital employed over the last decade. I’m not sure a premium valuation could be justified: 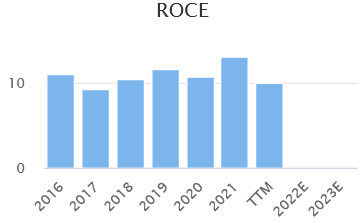 In addition, guidance for free cash flow of gt;£1bn suggests the shares are now trading with a free cash flow yield of just over 4%. That doesn’t seem especially cheap to me.

BAE’s F-Score of 5/9 is not outstanding either:

The StockRanks award BAE a score of 90, influenced heavily by its exceptional momentum ranking: 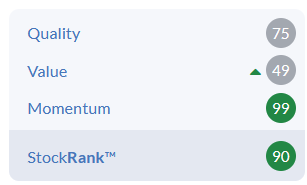 For investors who believe that defence spending will remain elevated for the foreseeable future, BAE shares may still offer some value.

I can’t argue against the logic of this view, but my personal stance is a little more cautious. My feeling is that barring a catastrophic escalation, the increase in defence spending triggered by the Ukraine conflict may already be priced into BAE shares.

Momentum remains a powerful force, but investors might want to consider whether BAE offers the value and yield they want. After all, this has historically been a mature and slow-growing business, prone to lumpy profits and geopolitical risk.

Summary: Diversified mining and commodity trading group, one of the world’s largest thermal coal producers. Recently agreed a $1.5bn settlement of bribery allegations in the US, UK and Brazil.

Recent trading amp; outlook: Glencore recently trimmed its 2022 production guidance for several commodities, following weather disruption and industrial action during the third quarter. Chief executive Gary Nagle also said that profits from the group’s trading division would be significantly lower during the second half of the year, following an “exceptionally strong” first half.

Overall, Glencore is still expected to report a record net profit of over $20bn this year, according to broker forecasts. Shareholders are expected to receive dividends totalling $0.60 per share, giving the stock a forecast yield in excess of 9%.

Comments: Rivals such as Rio Tinto have divested their coal operations, but Glencore has bucked the trend by staying invested. The company is billing itself as a responsible owner of coal assets in run-off, in parallel with developing energy transition assets such as copper, cobalt and nickel.

This strategy has been fortuitous (or perhaps far sighted). Glencore’s outsized exposure to thermal coal has seen it outperform its three London-listed rivals this year: 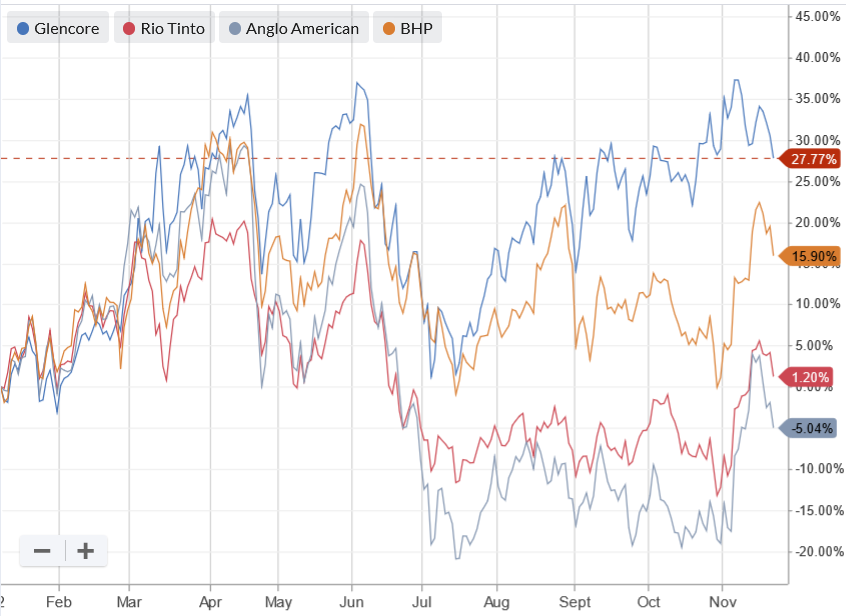 The $1.5bn of bribery settlements agreed recently can be seen as little more than an irritant for a group that generated $15bn in adjusted operating profit during the first half of 2022.

Logically, these profits should be exceptional, driven by peak coal prices. However, while iron ore has already slumped to pre-pandemic levels, coal prices remain high, supported by strong demand and some weather-related supply disruption.

Broker forecasts suggest that Glencore’s profits will fall in 2023, but they’re expected to remain well above the levels seen in recent years: 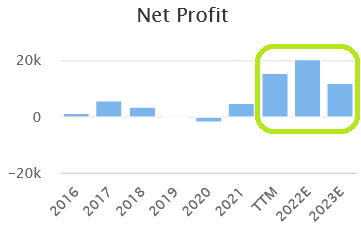 I think that Glencore’s decision to focus on both coal and energy transition materials is probably correct. The consistent profitability of its trading division is also worth emphasising. On balance, I suspect shareholders could continue to enjoy attractive dividends for several more years.

However, two factors would discourage me from investing. First of all, Glencore’s profits have been very inconsistent in the years since its 2007 listing: 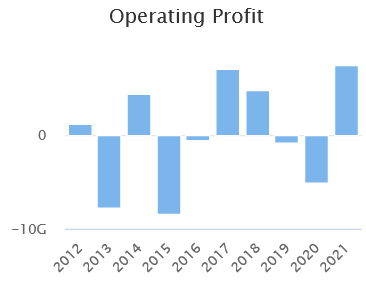 Second, broker forecasts show a strong and increasing conviction that profits will fall significantly next year. 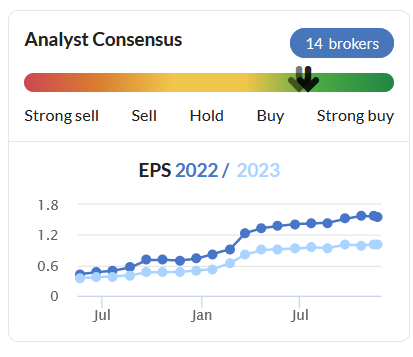 In the short term, I think the shares might have a little further to run. The StockRanks continue to rate Glencore favourably, and momentum looks positive: 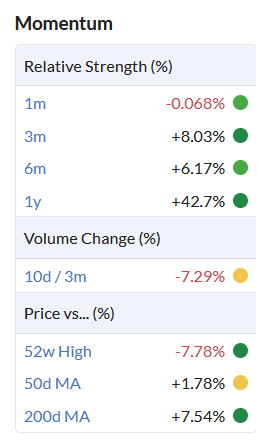 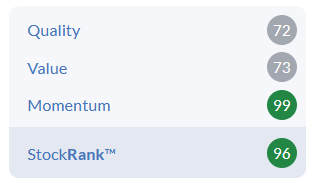 However, as a long-term investor, I’m unable to convince myself that it makes sense to buy a cyclical stock at what looks likely to be a cyclical peak in profits.

Summary: Oil and gas producer Shell is moving gradually into renewable energy and electricity supply, but still derives most of its profits from fossil fuels.

This largesse is backed by nine-month free cash flow of $30bn. However, the group’s third-quarter results showed adjusted earnings down by 18% to $9.5bn, with quarterly free cash flow down by 40% to $7.5bn.

The fall was caused by lower realised oil and gas prices, plus a 5% drop in production. Refinery profit margins were lower, too. Management says this was due to improved global supply of products such as petrol and diesel.

The outlook remains very positive. Broker forecasts suggest Shell’s net profit will peak this year at around $40bn. Profits are expected to fall next year, but only by 5%. 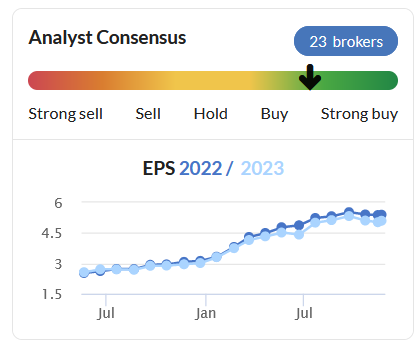 Comments: Shell shares have pulled back by around 10% from recent record highs and now offer a forecast yield approaching 4%. The business itself looks in great shape to me, with a healthy balance sheet and above-average profitability: 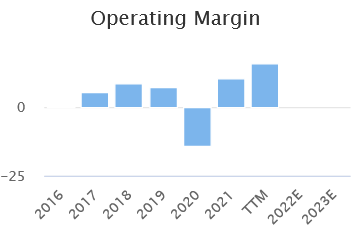 I guess the bullish argument for big oil stocks like Shell is that years of under investment have created a structural shortage in the mid-term supply of oil and perhaps gas. This story is backed by a very strong price momentum setup: 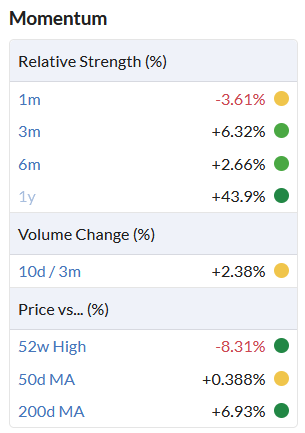 However, longer-term questions about the energy transition and the future of this business haven’t gone away.

In the meantime, oil prices have now been trending lower for the best part of six months. A mild autumn has also eased demand for gas in the northern hemisphere despite supply disruptions. 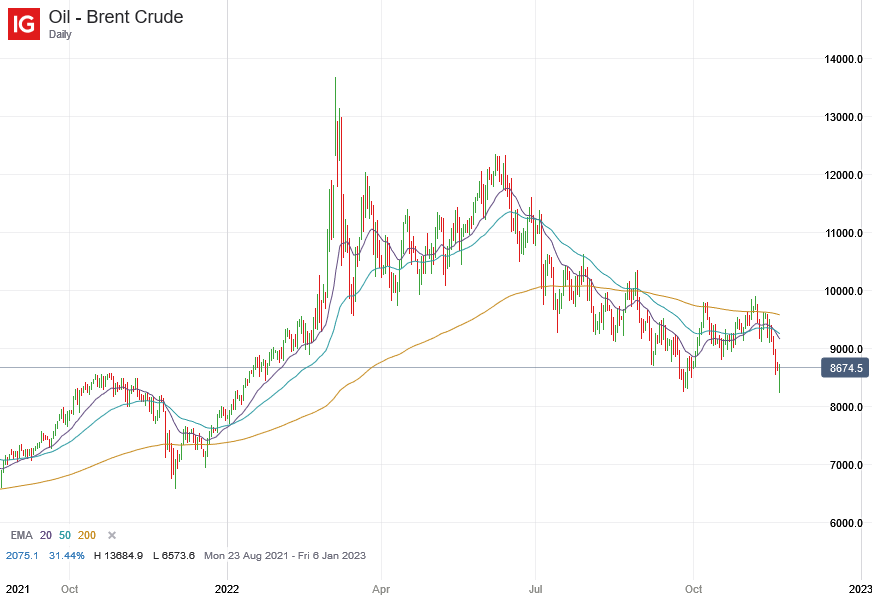 Shell’s forecast P/E ratio of five may seem cheap, but the stock’s cyclically-adjusted P/E of 12.9 seems high enough to me (I discussed this recently here).

Indeed, I’d argue that this figure is more consistent with Shell’s forecast dividend yield of 4%. With interest rates rising, I wouldn’t want much less than this from a mature, slow-growing business.

I don’t see a compelling case for investing in Shell at the moment. But I accept this is a minority view, and I may be missing something. As always, please DYOR and feel free to share your views in the comments below.