It’s earnings season on Wall Street. Many US firms have produced financial statements over the last month or so. It was also a busy month for director dealings. Directors at Merck amp; Co, JP Morgan and Goldman Sachs sold shares just as interim statements were published. Directors at other blue chips, including Coca Cola, purchased shares in the company they manage. Directors are not required to disclose why they bought or sold, but perhaps we can review these companies’ interim results to gauge whether directors are likely to be optimistic, or pessimistic, about the future. Let’s take a look at Merck amp; Co, the pharmaceutical and healthcare giant…

Are Directors Cashing in on Merck’s Success?

On October 28, Merck amp; Co reported higher-than-expected Q3 sales and profits. The firm benefited from a jump in demand for vaccines and cancer immunotherapy. Furthermore, some analysts believe that as the pandemic recedes, increased use of hospitals would support Merck’s doctor-office-focused drug portfolio. The positive Q3 results helped the share price reach $100, the highest point it reached over the preceding 52-week period. Directors were presented with opportunities to cash in on the price momentum. On 31 October, the firm’s Chairman, Kenneth C. Frazier used options to purchase ​​867,084 shares at $57.04, which he then sold at $100.44 per share, netting him a profit of $37m. The table below shows other trades that were made by directors exercising option schemes (see EX in Type column).

JP Morgan saw a string of director sells in October. So too did Goldman Sachs, where CEO David Solomon sold $2.5m of shares on 28 October. Many of these transactions were linked to options (see below) but we should not overlook the possibility that the sales reflect a lack of optimism about the future. On the one hand, higher interest rates could generate higher profits as banks earn more in terms of net interest income. However, these gains could be offset by a slowdown in investment banking activity. Indeed, JP Morgan reported a slide in net income, as investment banking activity fell against the backdrop of ongoing market volatility. Third-quarter profits dropped by $9.74bn. This was not as steep as some analysts expected, but a 17% fall nevertheless. Profits were also down at Goldman Sachs. Quarterly results, released on 14 October, revealed a 44% fall in Q3 profits. 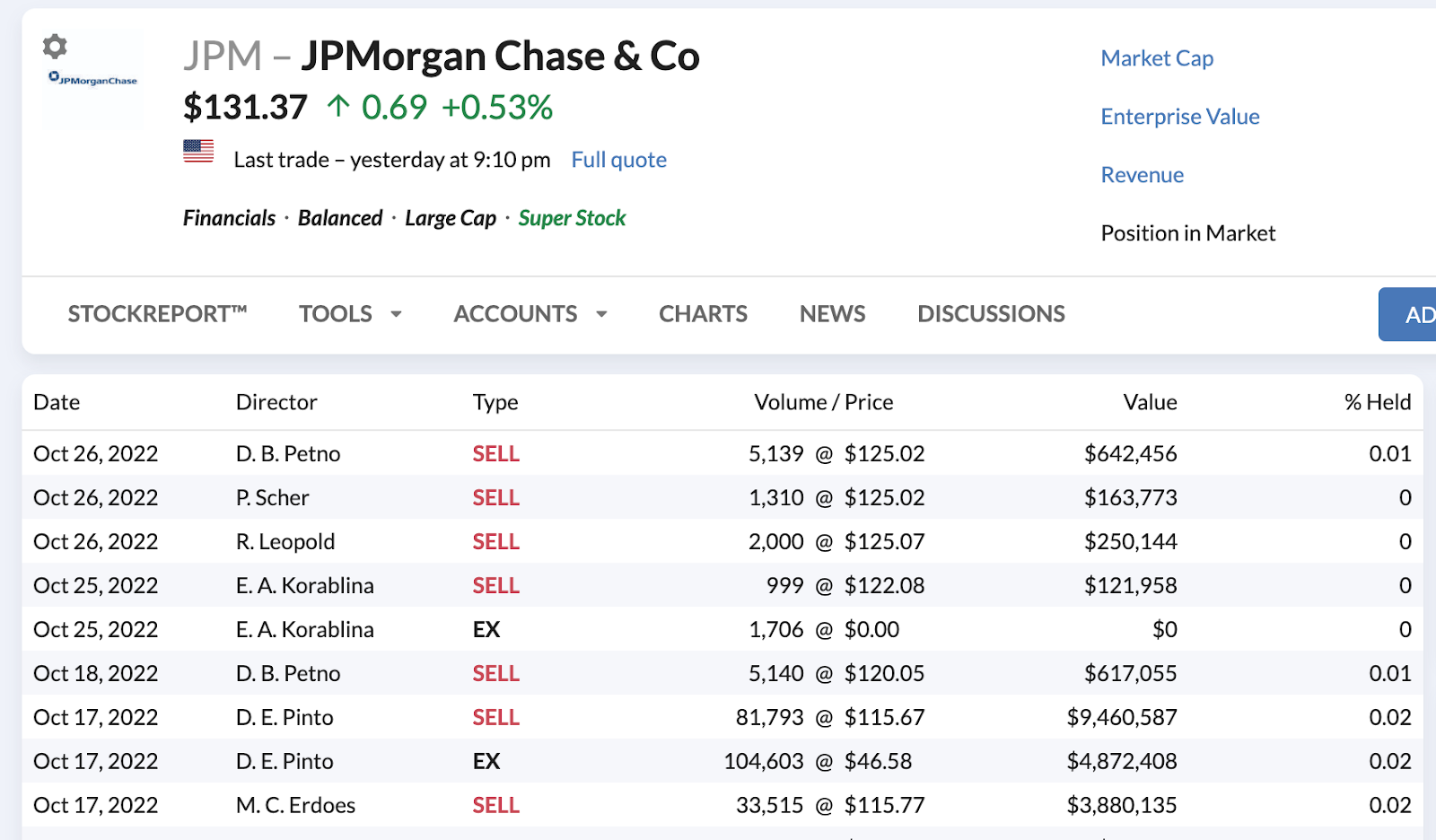 The list of director trades at Fastenal Co is streaked by a row of green ‘buys’ (see below). Around $65k of shares were purchased in October. The largest buy transaction was executed in September by Fastenal’s President and CEO, Daniel Florness. These transactions go against the grain of market sentiment. Fastenal’s share price has declined over the last year, from $58 to $48. Furthermore, the company is an industrial company, supplying fasteners, nuts, and bolts. Industrial firms are more sensitive to the business cycle, so they would perhaps be an unattractive investment during a recession. Why then have directors been buying? Maybe they were encouraged by Fastenal’s interim results. Q3 statements revealed that despite macroeconomic headwinds, earnings and revenues were up by more than brokers had anticipated, thanks in part to lower fuel and transport prices. 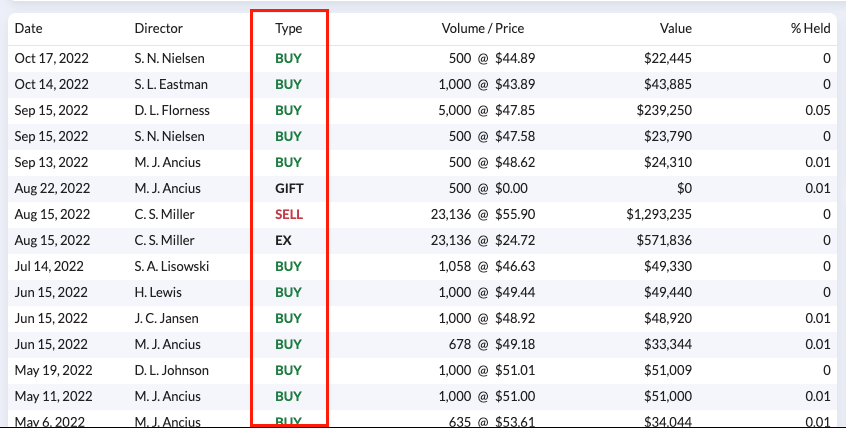 In October, directors bought shares at around $44, well below the $50 mark where Fastenal has traded over the last year. It is impossible to know directors’ exact motivations for buying, but perhaps they looked at the Q3 results and came to the conclusion that the price could resume its $50 per share valuation, especially if Fastenal has what it takes to weather an oncoming economic storm.

The list of director trades at Huntington Bancshares, a regional bank holding company, is similar to the table for Fastenal in that there is a solid column of director buying (see below). The transactions are dated 25 October, four days after Huntington produced a promising set of Q3 results. Huntington generated higher revenues and earnings than broker analysts were expecting. This made Q3 the third quarter in a row where the company performed better than broker forecasts. The firm has benefited from the higher interest environment. Huntington’s net interest margins – i.e. the difference between interest income and interest paid out to lenders – broadened from 2.9% (Q3 2021) and 3.4% in (Q3 2022). This could of course bode well for Huntington if interest rates continue to rise as we go forward. 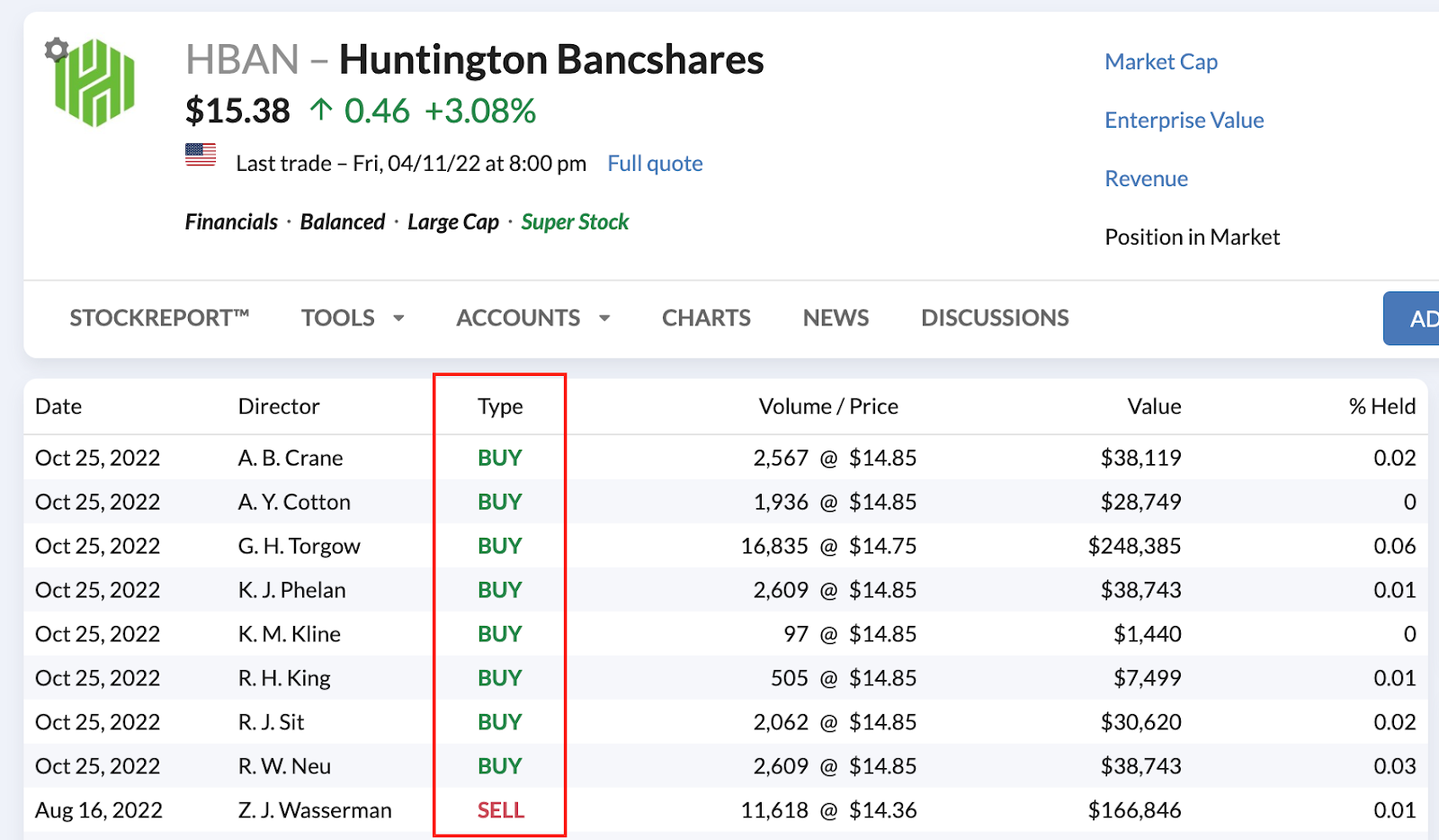 Consumer defensive companies, like Coca Cola, are typically a good place to hide during a market downturn. Over the last year, the world’s largest producer of fizzy drinks notched prices up. Nevertheless, demand has remained resilient and revenues have grown. Brokers are upbeat too. Credit Suisse says that the company has ‘strong momentum’ and ‘sees high conviction’ from Coca Cola’s ‘ability to sustain revenue growth into next year despite a highly volatile macro environment’. This optimism has perhaps been shared by some directors, including Herbert Allen, who purchased nearly $2m worth of shares on 28 October…

The shareholder activity bar also suggests that the stock is popular amongst Stockopedia subscribers as well as institutional investors.

It is said that investors should pay attention when CFOs and CEOs buy shares in their own company. They are likely to have clear insights into the prospects of the firms they manage. Things get particularly interesting when directors buy, despite a falling share price. Perhaps then it is worth exploring why James Leonard and Timothy Spence have been investing in Fifth Third Bancorp, the firm they manage as CFO and CEO respectively. Fifth Third Bancorp is a bank holding company with lending and residential mortgage arms. Rising interest rates seem to have hurt the company. Q3 Earnings and revenues both came in below broker expectations, partly due to a higher than usual loan loss provision for possible defaults by customers. The firm’s share price has also fallen from $50 to $35 since January. So why did Leonard and Spence invest? Maybe they have been encouraged by the firm’s strong long-run fundamentals. Operating margins have averaged 37% over the last 5 years. Fifth Third Bancorp could also be attractive to income investors. Every year since 2017, the company has successfully grown its dividend, which is well covered by earnings and cashflows and generates a yield of 3.5%. 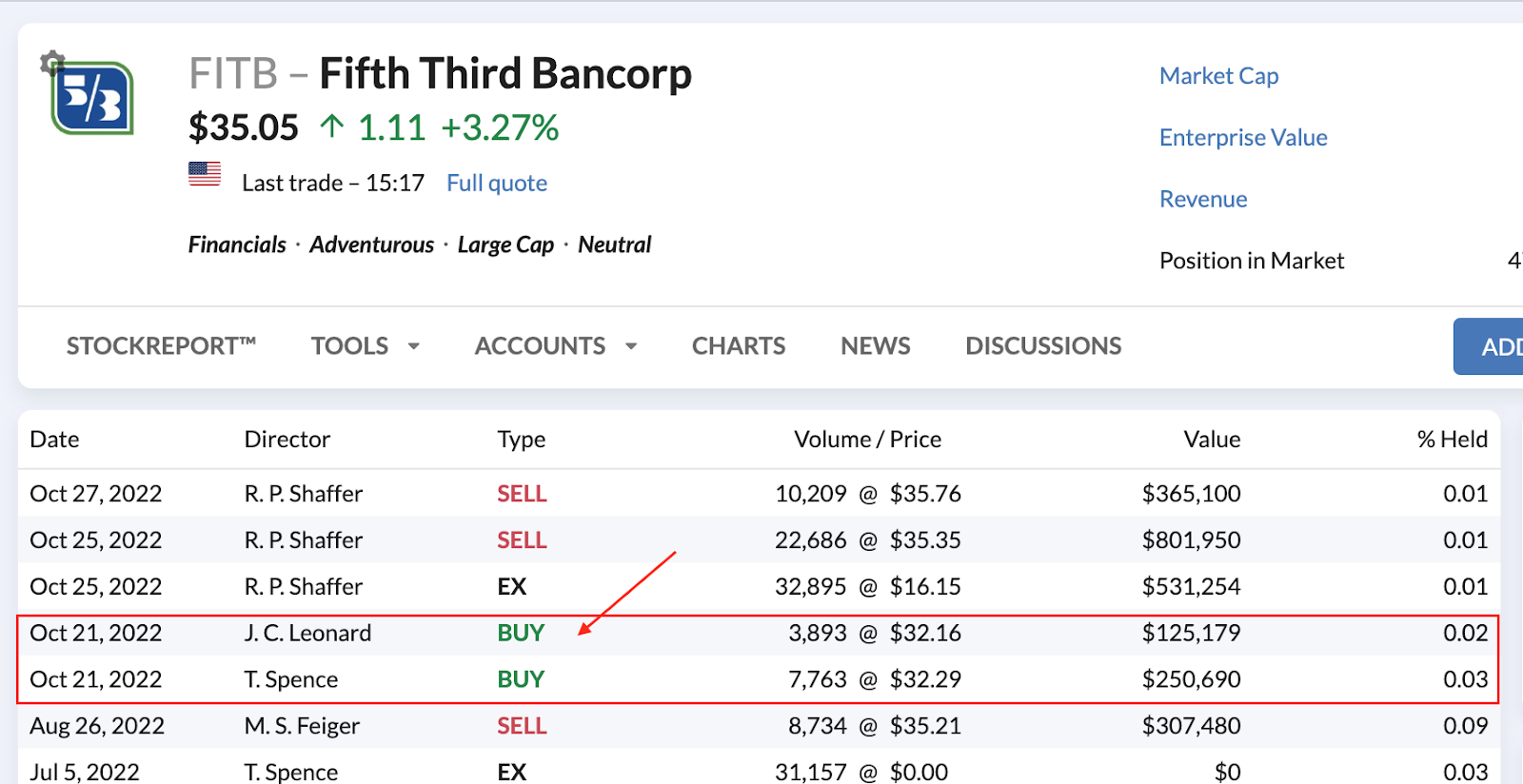 Nobody knows stocks better than directors that run the company. They have intimate knowledge of a firm’s future prospects and a huge information advantage over private investors. Readers can now use the Stockopedia site to follow international director trades. Director trades can now be found for all stocks in the Stockopedia coverage universe (with the exception of Japan and Taiwan, where the regulatory framework does not oblige directors to disclose trades). Household names can be seen from the StockReports, for example, Bill Gates buying Ecolab, or Berkshire Hathaway investing in Occidental Petroleum (see below). We won’t stop here. We have plans to enhance the director deals page and produce more international articles in this area. If readers have ideas or suggestions, do please feel free to leave a comment below… 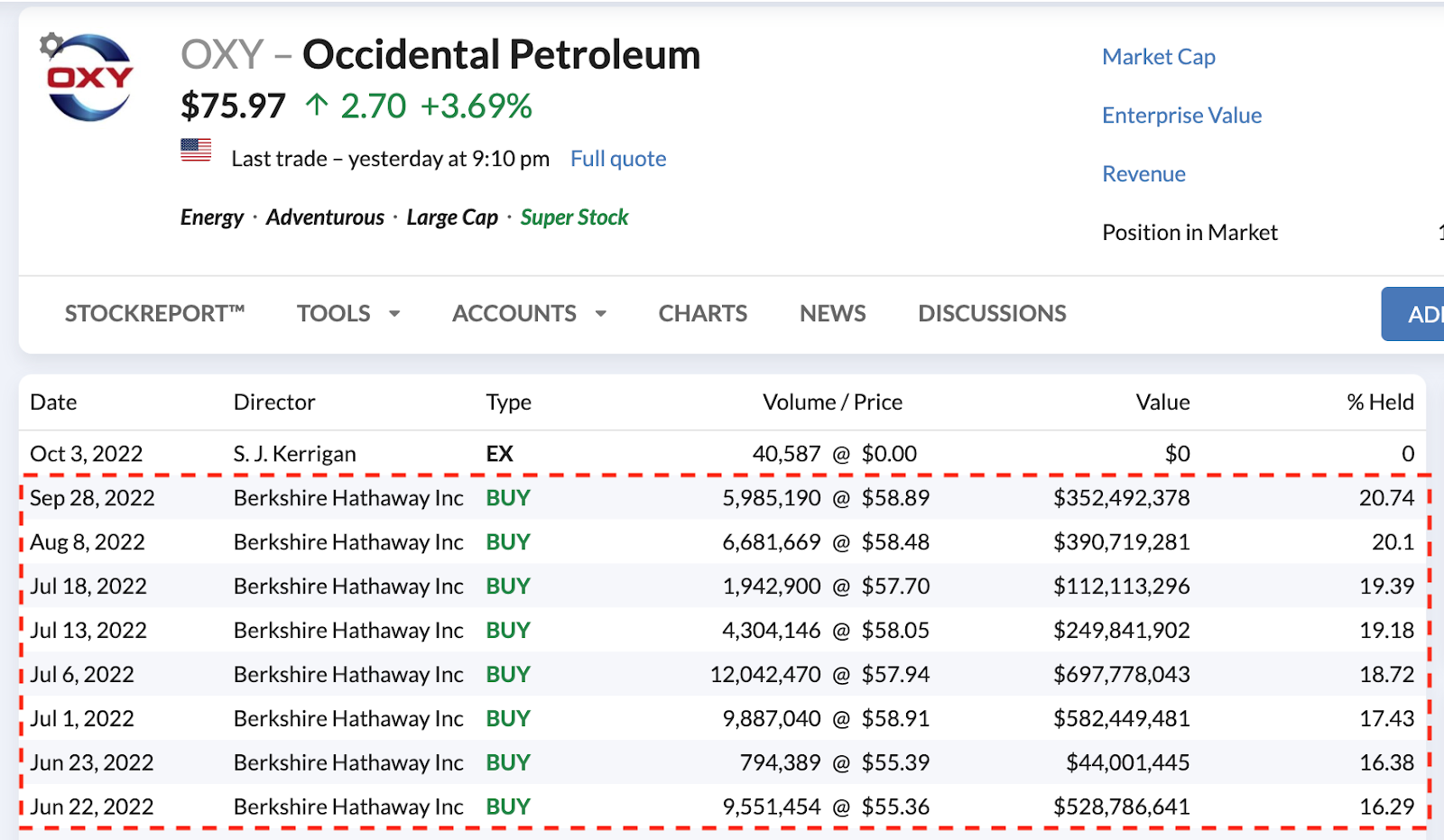 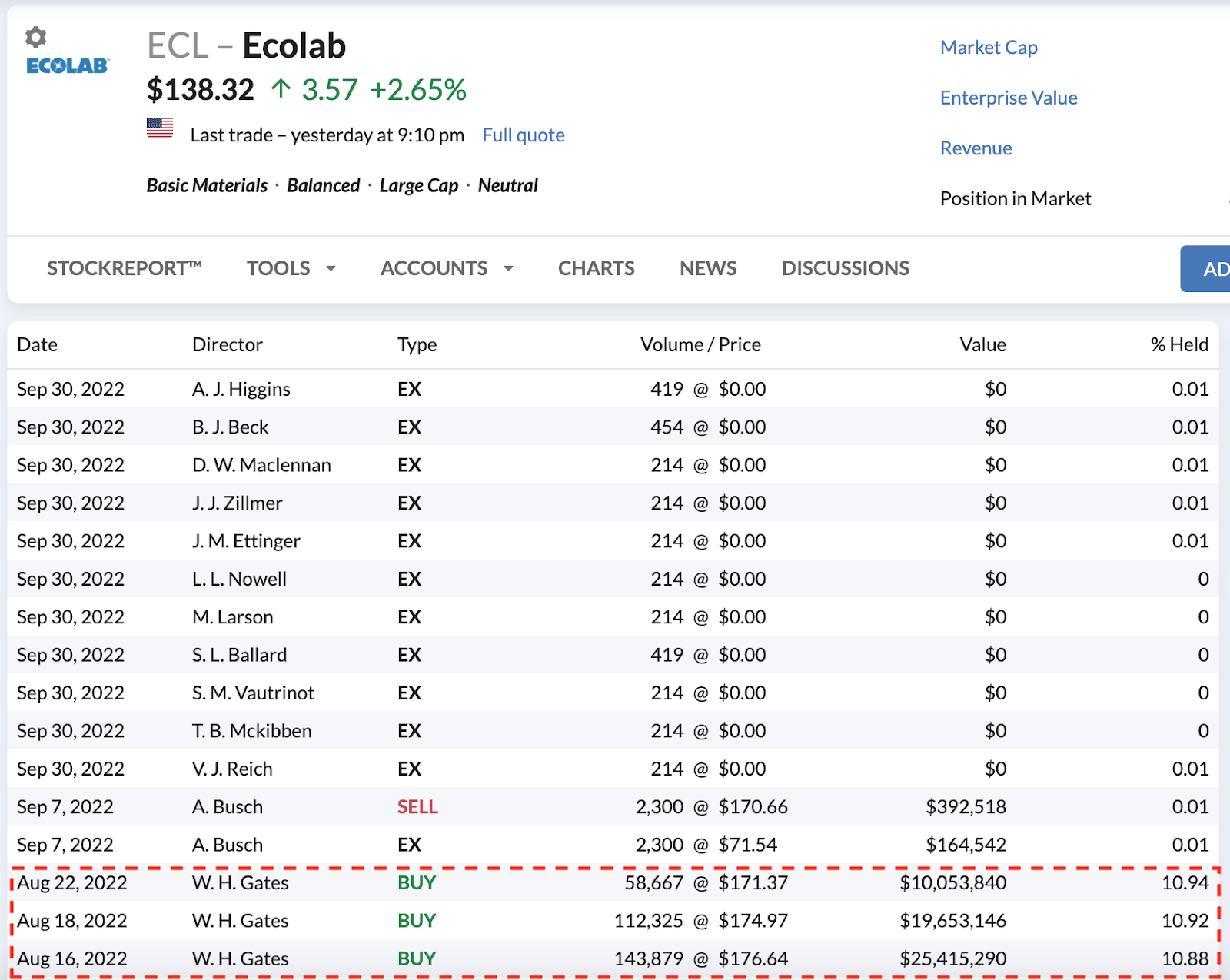