Nobody knows stocks better than directors that run the company. They have intimate knowledge of a firm’s future prospects and a huge information advantage over private investors. What if you could follow director trades to piggyback their insights? Now you can. The latest advancements on the platform enable investors to track Global director trades and potentially profit from director deals across the world. Until recently, Stockopedia only provided director deals data for UK stocks. The same data is now available for all regions in the Stockopedia coverage universe.

Subscribers will be familiar with the Accounts tab on StockReports; it enables you to read financial statements, track dividends and analyse major shareholdings. By clicking on director dealings, under the same tab, you will be taken to a page where it is possible to keep on top of directors’ trades and conduct further due diligence before making an investment decision. 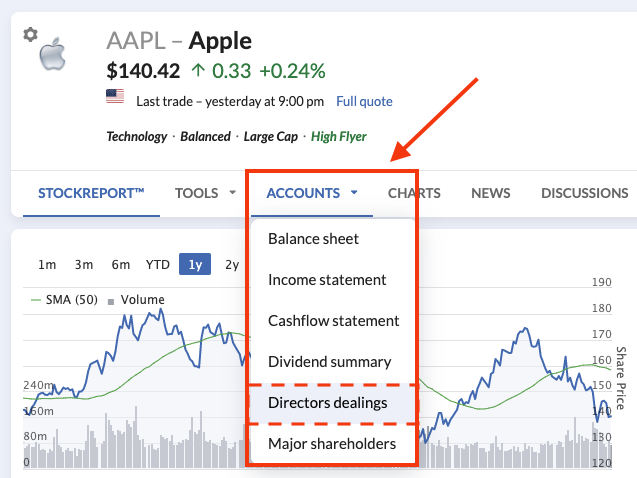 The director deals page shows a table with the following columns:

It is worth mentioning that a table row will not be present:

How Can I Use This Data?

Not all director dealings are meaningful signals. Here are four guiding principles that will help you benefit from this data

We have switched data vendor for director deals data, from Financial Express to Smart Insider. The new vendor enables Stockopedia to cover director deals on a global basis. Smart Insider also offers a broader range of data points, for example the directors’ Job Title, which we plan to incorporate into the product as we go forward. Furthermore, Smart Insider report trades on a consolidated basis, which makes analysis easier…

It can be difficult to track trading activity when the same director places a large number of small trades within a very narrow timeframe. To reduce noise and increase signal, we display consolidated transactions – i.e. a single table row when trades happen within a 4-week window, in the same security, with the same transaction type. When we consolidate trades, we use a weighted average price alongside the latest trade date in the series of transactions. The % Held column will also reflect the holding on the date of the last transaction.

Feel free to check out further details on our this help-page.