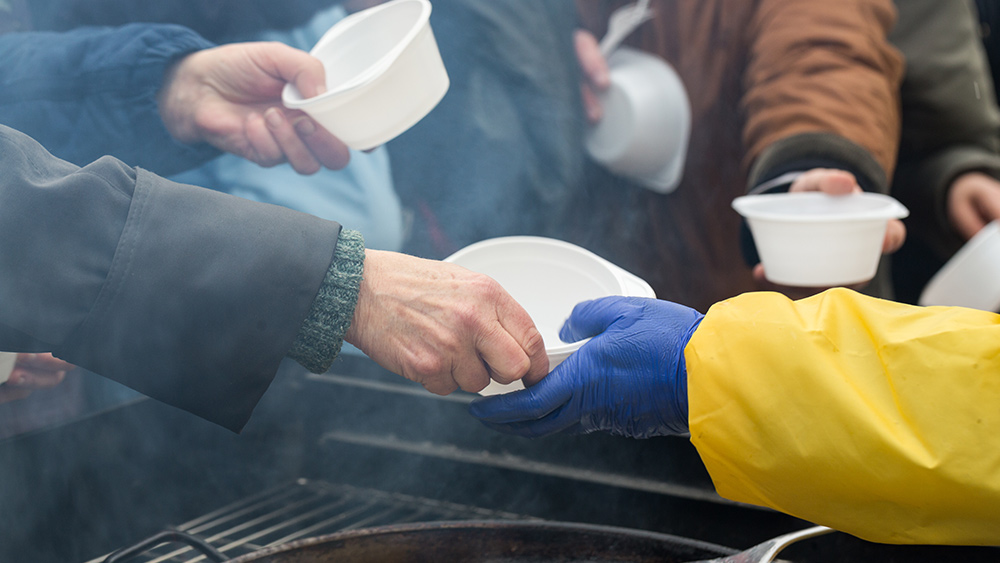 Thousands showed up on Tuesday, August 11, at Fair Park in Dallas as volunteers from the North Texas Food Bank (NTFB) distributed around 10,000 boxes of food.

People had begun lining up before sunrise hoping to get boxes containing canned goods, noodles, spaghetti sauce, peanut butter, rice, trail mix and some recipe ideas, according to recent reports from CBS Dallas.

The line reached more than a mile long as about 8,000 people came for the NTFB’s fourth food drive since the pandemic was declared in March. The NTFB planned to distribute enough food to support 2,000 families.

It was also the organization’s first distribution effort that offered a new walk-up option for hundreds of families and individuals without transportation.

The long lines came after almost 30 million of the 249 million Americans polled last month said they “didn’t have enough to eat,” and another 5.4 million reported they “often” did not have sufficient food.

One man showed up after his daughter had told him about the drive. “With unemployment benefits cut, her husband’s been laid off for three months. So, it’s just been a struggle,” Richard Archer told CBS Dallas.

“There’s times I open the refrigerator and there’s little there,” said Diana King. “We make do with what we have and we make it stretch.” King said she made the trip to save on food.

Others who showed up at the event had even driven from across Texas. “I came this far just to get the help,” said Rene Hightower, who lives in West Dallas.

Organizers see no indication that the food assistance will no longer be needed in the near future. “When stimulus checks hit, we saw a decrease,” said NTFB’s government relations director Valerie Hawthorne.

“But with unemployment benefits running out, we’ve seen the need increase,” she added.

Since March, more than three million Texans have filed unemployment claims. However, most of them saw their $600-a-week benefit reduced to $400 just last month.

This figure could even be further reduced to $300 in some states, if local governments fail to dole out the extra $100 it is recommended to provide, reported the Daily Mail.

In June, Texas saw a decrease in its unemployment rate after adding 243,900 private sector positions. (Related: Coronavirus pushes unemployment to highest levels since the Great Depression.)

However, recent distributions like the NTFB’s reveal that the need for food is still great.

Katie Fitzgerald, an executive at the nonprofit organization Feeding America, said that food bank demand has increased by 50 percent since the pandemic was declared in March.

She said that the pandemic has also affected certain groups worse than others, including people of color, women, children, seniors and those with disabilities.

But this is no recent news. In fact, a 2019 report from Feeding America said that 37 million Americans still face hunger, including more than 11 million children.

Moreover, most of those who are food insecure are ineligible for federal nutrition assistance programs. Therefore, for these households, charitable food assistance might be their sole option.

Furthermore, Fitzgerald reports that the number of volunteers in food drives has seen a significant decrease as well.

Organizers like Fitzgerald are calling for more government assistance and urging people to donate in cash to help them continue their work.

“We want the North Texas Food Bank to be a success,” said Luallen. But it’s critical to get the donations needed to keep doing good work, he added.

Read the latest articles about the food shortage in the U.S. during the Wuhan coronavirus outbreaks at Pandemic.news.