The Metaverse is trending as Meta Platforms Inc. wants to monitor people’s facial expressions, eye movements, and body poses as well as create “virtual stores” that sell ad-sponsored digital goods in an effort to monetize the metaverse, dozens of recently filed patents suggest.

If you thought that the internet and mindless social media was a digital prison, you ain’t seen nothing yet, what’s coming will make what you see now look about as harmless as a nursery rhyme by comparison. Meta Platform Inc. has been patenting scary digital applications and hardware like crazy, including something called the ‘robot eye’ which will function as a digital version of the all-seeing-eye of Horus.

“Lest Satan should get an advantage of us: for we are not ignorant of his devices.” 2 Corinthians 2:11 (KJB)

Remember that Eagles song from the 1970’s called ‘Hotel California’? The lyrics were something along the lines of “Relax, ‘ said the night man, ‘We are programmed to receive. You can check-out any time you like, But you can never leave!” That’s the Metaverse, and that’s no joke. If you are a Bible believing Christian, then resolve within yourself now to have nothing to do with the Metaverse, augmented reality and virtual reality. Nothing, just stay away from it. all of it.

IT’S NOT JUST FACEBOOK, MEET THE 5 OTHER MEGA-CORPORATIONS THAT ARE SPENDING BILLIONS TO ENSLAVE YOU IN THE VIRTUAL PRISON OF THE METAVERSE DYSTOPIA

FROM THE NY POST: The company that began as Facebook and which has recently rebranded itself as Meta filed hundreds of patents recently with the US Patent and Trademark Office. These filings shed light on the company’s plans for the internet’s new frontier. The patents, which were first reported by the Financial Times, indicate that Meta wants to use biometric data in order to create a more realistic digital avatar using virtual reality or augmented reality.

Meta also plans to collect data on users so that it could tailor specific ad content while they immerse themselves in the metaverse, the patent filings suggest. One patent filing shows a sketch of a “wearable magnetic sensor system” that the user places around their torso for “body pose tracking.” 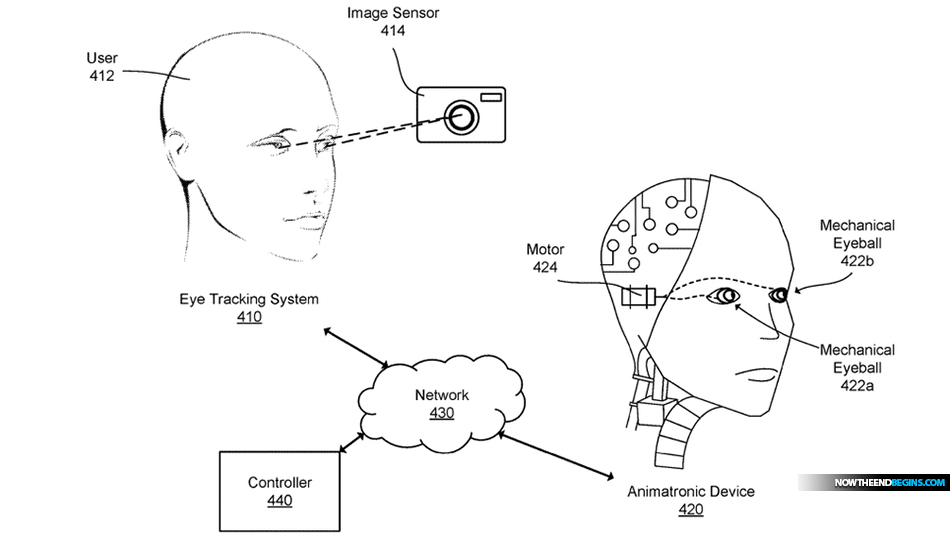 Another patent can detect a user’s facial expressions through a headset. The system would then compute the expressions and “adapt media content” based on its findings. The company is essentially following the same business model that translated into tens of billions of dollars in profit through its social network.

Meta also filed a patent for a headset that is equipped with cameras and sensors that ensure the user sees brighter graphics depending on where they’re looking. The firm is also said to be developing an “avatar personalization engine” that can create three-dimensional avatars based on a user’s photos.

“For us, the business model in the metaverse is commerce-led,” Nick Clegg, Meta’s head of global affairs, told FT. “Clearly ads play a part in that.”

Some of the patents appear to have originated in a science fiction movie. In December, Meta was granted a patent for the “mechanical eyeball 100,” which is said to be a “robotic eye designed to resemble a [human] eye.”

The eye is designed to “mate” with an animatronic robot head in an effort to make the eye “appear authentic to an observer,” according to Insider, which first reported the patent filing.

Meta CEO Mark Zuckerberg has said his company plans to invest $10 billion per year over the next decade to develop metaverse technology. The race to metaverse supremacy has set up a clash of tech titans as Apple and Microsoft have also indicated they plan to spend considerable sums of money to grab a share of the market.

Meta’s push to collect more data could trigger a backlash, particularly in light of claims that the company disregarded its own engineers’ advice and bombarded Facebook and Instagram users with targeted content that was known to be harmful. Shares of Meta rose by more than 1.2% in the first hour of trading on Wall Street on Wednesday. READ MORE

But whatever you do, don’t do nothing. Time is short and we need your help right now. If every one of the 15,860+ people on our daily mailing list gave $4.50, we would reach our goal immediately. If every one of our 150,000+ followers on Facebook gave $1.00 each, we would reach 300% of our goal. The same goes for our 16,400 followers on Twitter. But sadly, many will not give, so we need the ones who can and who will give to be generous. As generous as possible.

The post The Metaverse Will Be A Full-Time Tracking And Surveillance Platform That Records Your Eye Movements, Facial Expressions And Biometric Data appeared first on Now The End Begins.