As 2019 began Oroco Resource Corp OCO.v was making progress in its decade long legal battle to acquire the massive Santo Tomas copper deposit in Northern Mexico. Those with the fortitude and ability to speculate on the outcome had already seen returns two to three times their money invested the year before. As the first half of the year progressed the multi faceted multi country legal strategy Oroco had put in place began to pay off. They won control of the Arizona Company that was at the center of the opposition’s legal fight. Soon after they got the ruling everyone was waiting for in Mexico. Legals were done!

As is with most things there is a yin and a yang. As things were going our way on the corporate side the U.S. decided to up its trade war with China. The red metal found some tough months sinking to the 2.50 range. We were not deterred, our thesis was that the copper was there is massive enough quantity and that the spot copper price fundamentals were being masked by political events. Those that had done significant diligence on the project knew that a previous operator had taken Santo Tomas to the pre feasibility stage at $300 gold 1 dollar copper and 5 dollar silver and it was attractive back then so fluctuations on todays prices were not a concern.

The market has largely ignored the progress or has been otherwise skeptical of the ability of a micro cap venture listed company gaining control of a world-class asset like Santo Tomas. Oroco’s management has delivered on everything they have ever promised. It may have taken longer than we first thought but in the end we own the asset and it is undisputable. The Amparo ruling on Mexico has completely nullified anything that had come before so an appeal was never an option. Doubly so, since Oroco now had control of the Arzona Corporation.

There was just one more point the market could claim some doubt “the transfer.” Again, anyone that had done their homework already knew Oroco owned the asset through an option agreement with a Mexican Corp owned 50% by Oroco and 50% by the landowner. The long awaited transfer was simply from one Mexican company owned by us to another company owned by us that had a superior option to acquire the deposit, with a work in clause stating that as money is spent we gain a larger percentage of the overall project. Mind you all this is just focused on the core claims covering about 70% of the deposit. Concurrent with the legals, Oroco management was securing ownership of the surrounding land and as it turns out about 20% of the southern lobe of the deposit.

As of 20, December 2019 Oroco was informed that the main claims at Santo Tomas had been renewed for 50 years. This was the last impediment delaying the transfer. It is thought that transfer will now occur very quickly within the first weeks of 2020.

I have been talking about Oroco for about 28 months, I have already seen a 10 bagger on my first buys. This has always been a no brainer for me. Once I had researched the deposit there was no doubt it would be one of the few, very few, world- class deposits in demand in the coming years. I won’t go into the reasons to buy copper at this point, overwhelming evidence exists for a coming supply shortfall, in which Santo Tomas will be highly sought after.

There have been many, many opportunities to get in to this special situation along the way and I think the little time left before transfer occurs in January will be one of the last. Copper has had a strong rally on easing trade fears, putting a nice tailwind behind Oroco stock.

I have previously stated the shares in the company are tightly held by a handful of large shareholders and management. Good news will easily sent them to new highs in early 2020. We are not traders in this name and have been adding in the last months.

The next steps will be to secure funding to initiate a work program on the property starting with a 3d IP survey to show the world how large the deposit is subsurface followed by infill drilling that will upgrade another billion tons to indicated and with that, increasing grade in already booked pounds. I’m eagerly awaiting some step-outs and exploration drilling North of the known deposit.   Any success there will surely get the attention of the few majors that are not already watching progress at Santo Tomas.

2019 was by in large a housekeeping year for Oroco. They delivered on everything promised and have set themselves up for a blockbuster year in 2020. Opportunities to buy are quickly evaporating and prices paid will only increase as the year progresses.

Many thanks to Oroco Management for their efforts over the last decade that have only just begun to be recognized by the market. The coming year will be transformational, both for the company and my portfolio! 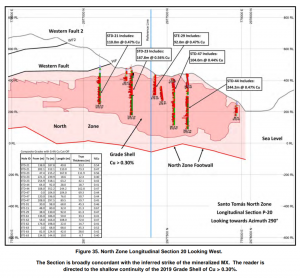 Source: http://calichebahada.com/2019/12/21/3007/
Before It’s News® is a community of individuals who report on what’s going on around them, from all around the world.