Our Founding Fathers knew of the evils paper money and warned against its issuance.On August 1, 1787, George Washington wrote to Thomas Jefferson that “paper currency [can] ruin commerce, oppress the honest, and open the door to every species of fraud and injustice.”

Not surprisingly, Jefferson agreed and warned that “banking establishments are more dangerous than standing armies.”

James Madison called paper money “unjust,” recognizing that it allowed the government to confiscate and redistribute property through inflation: “It affects the rights of property as much as taking away equal value in land.”

Consequently, Article I Section 10 of our Constitution states: “No State shall . . . make any Thing but gold and silver Coin a Tender in Payment of Debts. . .”

The Founders understood the evils of paper money, and so have modern-day economists, but their names most people do not recognize: Ludwig von Mises, F.A. Hayek, Henry Hazlett, Murray Rothbard, to mention only a few.

However, the name John Maynard Keynes, the father of debt and printing press money, is well known to all.  “There is no subtler, no surer means of overturning the existing basis of society than to debauch the currency. The process engages all the hidden forces of economic law on the side of destruction, and does it in a manner which not one man in a million is able to diagnose….”

It is hard to believe that the Founders conceived that some day in the great country that they established that a person could sit at a computer keyboard (obviously, not even imagined in their day) and create money, with which they bought bonds and flooded the monetary system with money.

In the years shortly after the founding of the United States of America, Congress passed laws that delineated the amount of gold and silver that would be in our money: specie—money in the form of coins—not notes, not paper money. 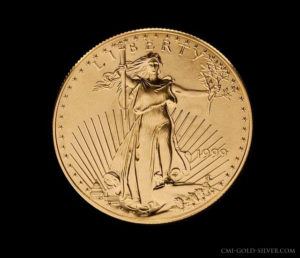 Although the Establishment’s position is that paper money is good, Americans can protect themselves from the evils of paper money by buying Gold Eagles and/or other forms of gold.

The post The evils of paper money have long been known first appeared on CMI Gold & Silver.