In October, the US government will be unable to pay it bills if Congress does not raise the debt ceiling.  The debt ceiling is the legal cap that Congress sets on the amount that the Treasury can borrow. 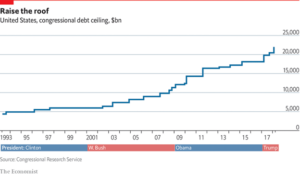 Since 1960, the debt ceiling has been raised 78 times. During Donald Trump’s presidency, the ceiling was raised three times.  Further, the Democrats agreed to a two-year suspension of the ceiling as part of a budget agreement in 2019. Since the suspension expired in late July, the Treasury has been taking “extraordinary measures”, which includes suspending investments in some federal retirement and disability funds, to conserve cash.

Janet Yellen, the Treasury Secretary, has since warned that failing to raise the ceiling would result in “economic catastrophe,” with perhaps soldiers and pensioners going unpaid.

The long-term consequences of defaulting on Treasury securities could be more harmful as the dollar is the world’s reserve currency and much of the global financial system is built on the assumption that Treasuries are risk-free. The last time America flirted with a default, Standard & Poor’s stripped US of its AAA rating.

Democrats plan to introduce a bill to lift the debt ceiling, extend government funding through December and pay for relief from recent natural disasters. Senate Republicans say they will not approve an increase, but Democrats want to test that resolve.

Democrats believe Republicans will cave rather than cause a default and government shutdown, and they also believe they may be able to pick up a few votes from Republicans representing states hit by hurricanes.

Republicans want Democrats to pass the bill on a party-line vote, which and paint Democrats as the party of irresponsible spending.

Regardless, as October approaches and the topic of raising the debt ceiling—and the consequences of not doing it—gets discussed, we can expect increased interest in gold and silver.

The post America’s debt ceiling: What happens if Congress fails to raise it? first appeared on CMI Gold & Silver.