With the possibility of a Fed pivot looming, expert Clive Maund touches on his views of the precious metals sector and why he believes you should invest in it sooner rather than later.

On the 1-year chart for gold shown below, we can see precisely why it has been in a quite severe downtrend from its peak last March. It is because the dollar and interest rates, shown at the top and bottom of the chart, have been in strong uptrends during this period.

A very important point to note is that while gold has dropped about $400 from its March peak, in real terms, this decline is much more serious because of the robust inflation during this period.

So if the Fed does pivot soon, that is to say, it stops raising rates and starts lowering them, or other Central Banks start raising rates, thus reducing the dollar’s appeal.

It will mean a reversal to the downside in the dollar and to the upside in gold and commodities and risk-on assets generally, and as we saw on Friday 21st, even talk of a pivot is enough to generate a recovery.

A very important point to note is that while gold has dropped about $400 from its March peak, in real terms, this decline is much more serious because of the robust inflation during this period.

So when you talk about $1600 gold now, it means that in, say, 2019 prices, it’s probably about $1200. This gives us more of an idea about how undervalued gold and especially silver are now. Before leaving this chart, observe that gold may be making a Double Bottom here with its September lows. 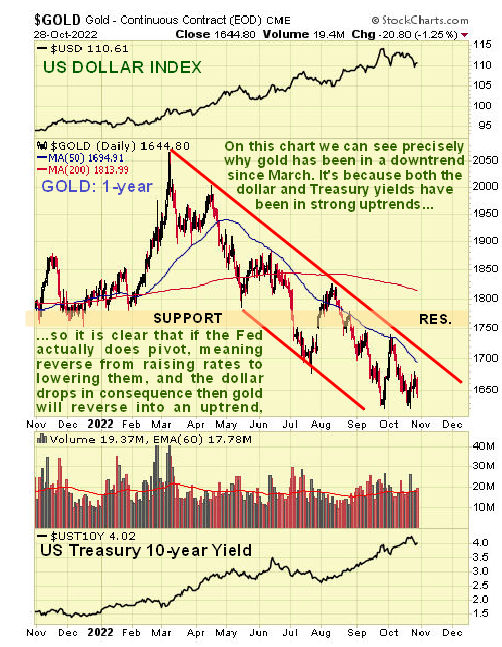 The next chart, the 1-year chart for PM sector proxy GDX, is most interesting as it makes plain that, even on a log chart as this is, the downtrend in the sector from its April highs has been decelerating steadily to the point that the MACD indicator has recovered back almost to the zero line.

If this interpretation is correct, then we are at a point of huge opportunity to buy the sector before it breaks out.

This is the sort of behavior that usually precedes a reversal to the upside, so it is not surprising to see that a small Head-and-Shoulders appears to be completed within the downtrend channel, whose validity is endorsed by the bullish volume pattern that has accompanied it, with strong volume on the rise to form the right side of the Head of the pattern and again on the rise late last week as it completes what is believed to be the Right Shoulder of the pattern.

If this interpretation is correct, then we are at a point of huge opportunity to buy the sector before it breaks out. 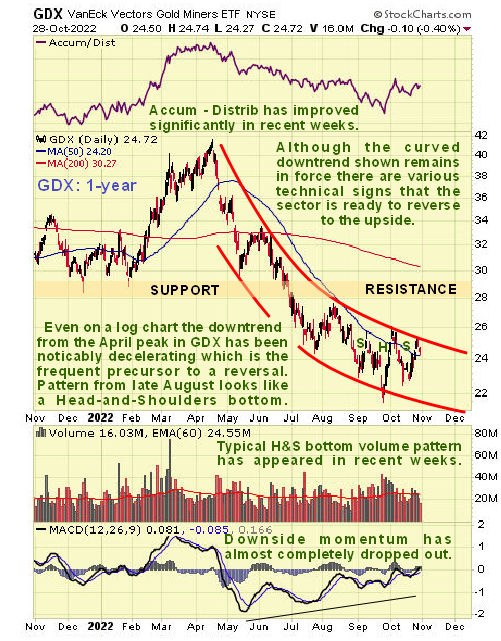 In the context of the foregoing, it’s useful for us to consider the extent to which the PM sector has markedly underperformed even the frail stock market in recent months.

Silver is regarded as probably the most undervalued asset in the world.

On the 1-year chart for GDX over the S&P500 index, we can see that it has seriously underperformed due, of course, to the strong rise in the dollar and interest rates.

This is important because it means that the PM sector is even better value here compared to the broad market. 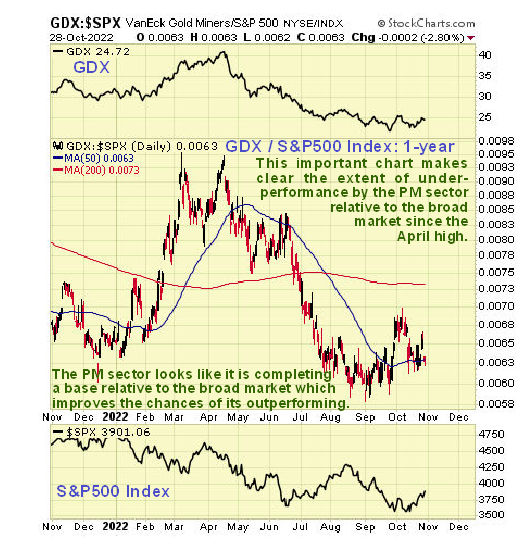 Alright, so if we are at or close to a bottom in gold and the PM sector, then we would expect to see the normally wrong Large Specs having Little interest in gold, and that is exactly what we see on the latest COT chart for gold, which shows that they have pretty much given up on it. 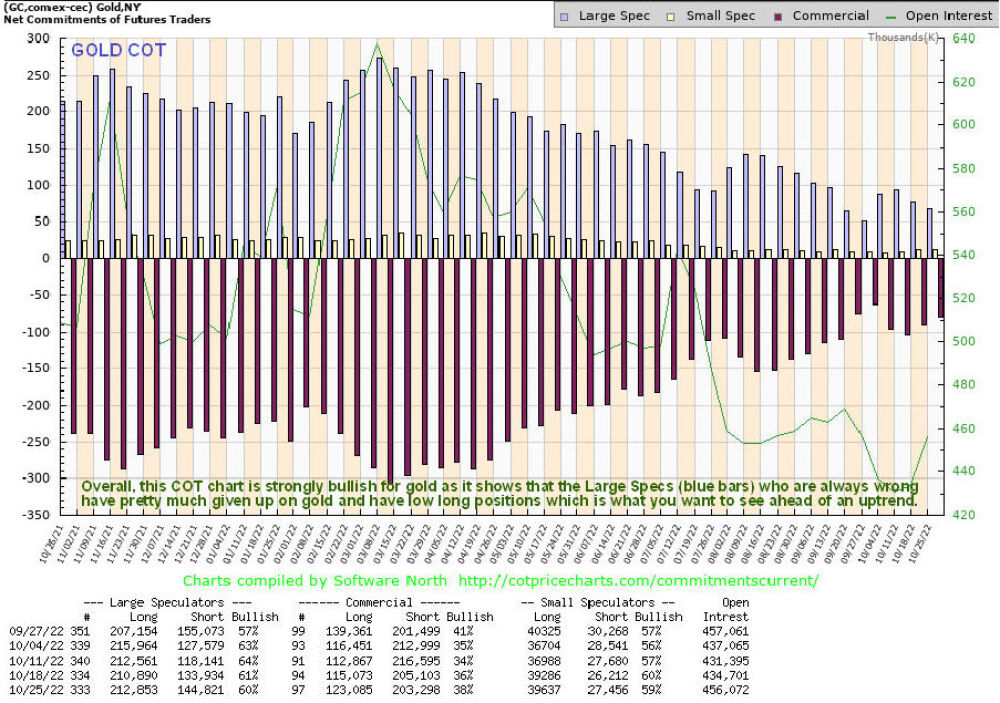 On its 1-year chart, we can see that it has dropped back from its March highs for the same reasons that gold has, the strong uptrends in the dollar, and interest rates.

This is looking like a great place to load up on the better gold and silver stocks.

However, since July, a potential base pattern has been building out that is now starting to look like a completing Triple Bottom, and with the steadily uptrending momentum (MACD) now about to swing positive, the outlook is brightening and the strong volume on the rally out of the low in the middle of the month, better seen on a 6-month chart, looks like the beginnings of a rally up towards the resistance at the upper boundary of the pattern. 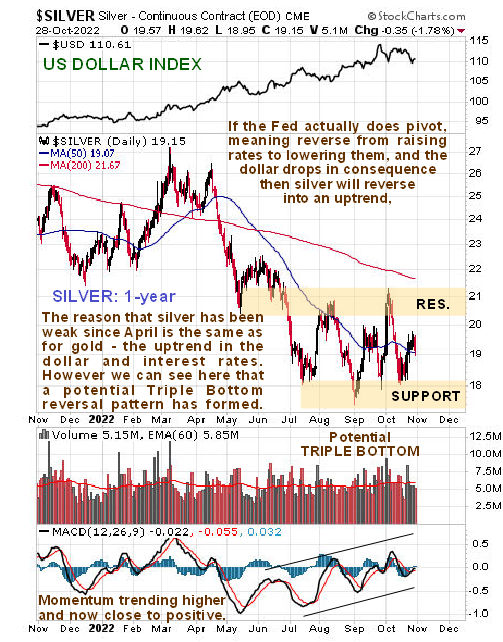 If silver is close to an optimum point to buy, then we would expect to see the dumb Large Specs having no interest in it all, and that is exactly what we see on silver’s latest COT chart, which shows the Large Specs net long positions to be virtually non-existent . . . 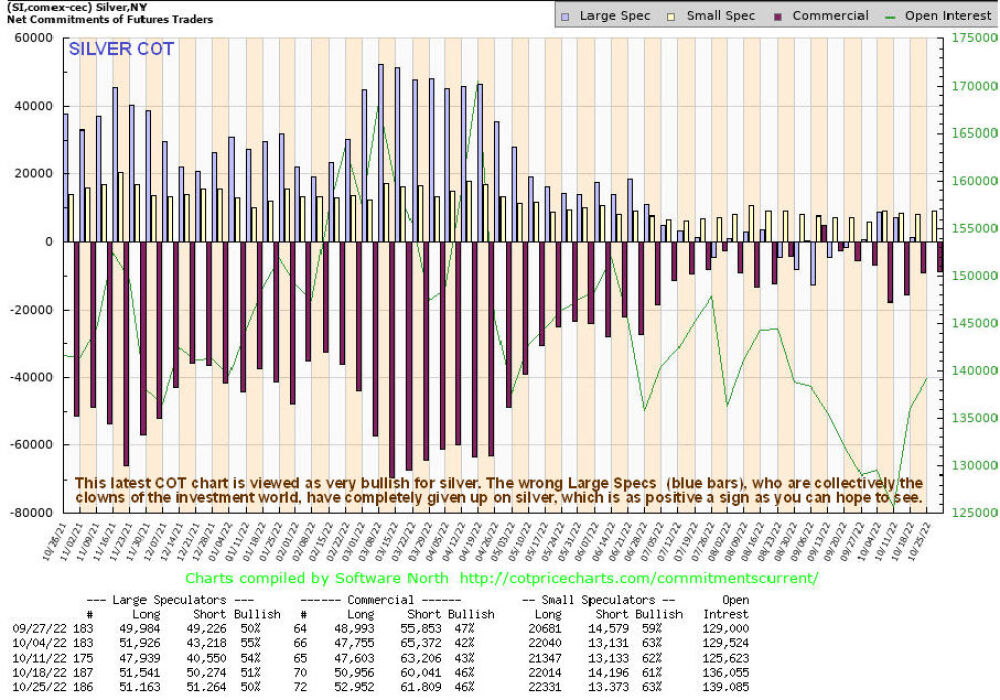 It’s useful here to take a quick look at the 5-year chart for the dollar index because, on this chart, we see that it has gone parabolic in recent months, and it’s possible that it just topped out.

Two possible reasons for it to turn and break down that have already been mentioned are a “Fed pivot” and other countries or trading blocs, such as the European Union, following the Fed’s lead and raising rates too.

The U.S. Dollar and British Pound 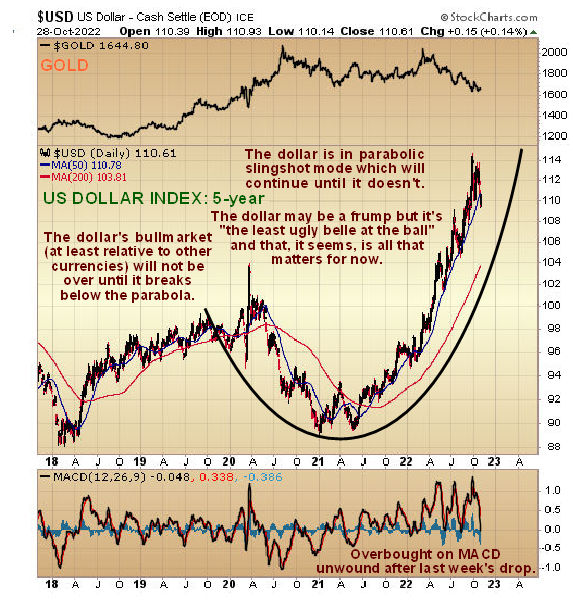 Just for laughs, let’s take a quick look at the 5-year chart for the British Pound.

It shows that it has been terribly weak, dropping an incredible 40% in less than 18 months . . . 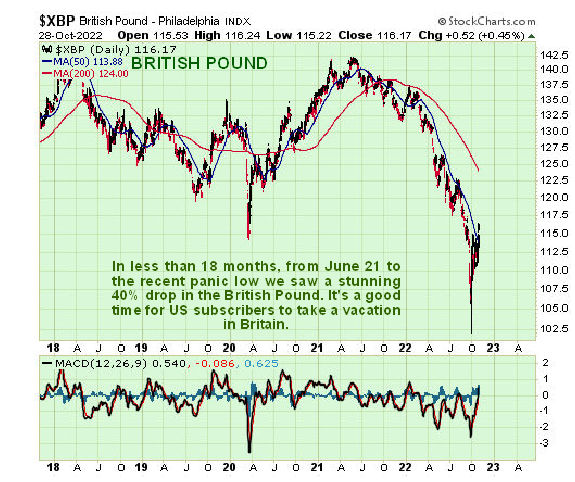 For U.S. readers who’ve always wanted to see the sights in Britain, and have the time and money, now is a good time to vacation there while the exchange rate is good before the Winter.

If you want ideas on what to visit, I can give you a list as long as your arm.

The Risk of a Market Crash

Finally, what about the ongoing risk of an all-out market crash? Would that not drag gold and silver, and PM stocks down even further?

Well, it could, although it may not because, this time, there will be no hiding place for investors in the Treasury market, which is already on the rocks.

So with this option closed off, funk money will probably flee into gold and silver instead. This time round is very different in that the powers that be fully intend to destroy the world economy kill off most of the population, and turn the survivors into cyborg-like slaves, and have made their intentions very clear to anyone with more than a few functioning brain cells.

This would best be achieved by a state of hyperinflation, Venezuela style, that would render the population destitute and totally at the mercy of the State (except for some preppers, who will probably be identified and rounded up anyway).

Following this logic, they will continue to create money to defer the debt market collapse for as long as possible, and the hyperinflation that will result, which we are already close to, must mean an exponential rise in the price of hard assets like gold and silver, with physical being very highly prized and hard to obtain.

The charts that we have reviewed in this update strongly suggest that, whatever the broad market does from here, the PM sector has bottomed out and is going to rally soon. An important article posted by Adam Hamilton a couple of days ago, Gold Stocks’ Winter Rally 7, strongly supports this contention.

Although long, this common sense article presents reasoned arguments based on his many years of experience with this sector and should thus be taken seriously.

Conclusion — This is looking like a great place to load up on the better gold and silver stocks.

3) From time to time, Streetwise Reports LLC and its directors, officers, employees or members of their families, as well as persons interviewed for articles and interviews on the site, may have a long or short position in securities mentioned. Directors, officers, employees or members of their immediate families are prohibited from making purchases and/or sales of those securities in the open market or otherwise from the time of the decision to publish an article until three business days after the publication of the article. The foregoing prohibition does not apply to articles that in substance only restate previously published company releases.