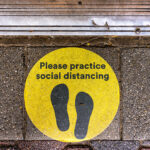 (NaturalHealth365) “Please maintain six feet of space between you and others.” We’ve seen these warnings plastered just about everywhere since the COVID-19 pandemic began in 2019/2020.  Tape and stickers on floors, signs on walls … where did this magical 6-foot rule come from, anyway?  According to Business Insider, it’s actually nothing more than a dogmatic, “outdated,” 80-year-old rule originating from the early 1940s when researchers took photos (at 30,000 frames per second) of people sneezing and found that “most of the infectious gunk people expel … travel less than 6 feet away.”

It is a bit absurd to think that the U.S. government compelled businesses to dictate the way people mobilize in society based on that.  And now, even U.S. officials admit that their original physical distancing guidelines were more or less made up.

We’ve all seen the viral videos of individuals panicking and yelling at others for invading their six-foot bubble of space while in public, even while on beaches and in parks.  It’s truly heartbreaking to see how some people have become so thoroughly overwhelmed and overtaken by the successful fear-mongering campaign by the mainstream media.

And all for naught, some say.

Dr. Ashish Kumar Jha is a physician serving as the White House Coronavirus Response Coordinator.  In a recent August 16 interview with the U.S. Chamber of Commerce, Dr. Jha admitted that he and his colleagues “used to spend a lot of time talking about 6 feet of distance, 15 minutes of being together.” He then states that they now “realize that’s actually not the right way to think about this.”

He continues: “What we know about this virus, particularly these very contagious subvariants that are out there right now, it is really about the quality of air you’re breathing around you … In a crowded indoor space with poor ventilation, you can be infected within minutes.”

As if he is stating a brand new concept, Dr. Jha adds that “context matters.  Crowds matter.  Ventilation matters.  That is a major new update in the [Centers for Disease Control and Prevention] guidance.”

Well, congratulations, CDC.  You’re now aligned with what officials in places like Texas and Florida have been doing virtually all along – and were heavily criticized for by the mainstream media, by the way.

The fact that the government basically just admitted they were wrong about the six-foot rule (and the need for mask-wearing outside, for example) says a lot.  Real-world data simply never supported that recommendation.

In fact, according to a study from the American Council on Science and Health, school districts that imposed the six-foot rule actually had 11% MORE COVID cases than districts that “allowed” kids to be just 3 feet away from each other.  (By the way, relaxing the physical distancing rule in schools from 6 feet to 3 feet was yet another random move that the CDC greenlighted in March 2021 in response to major pushback from educators so that more kids could be allowed in the classrooms – again, NOT science-based.)

Of course, who knows whether U.S. officials would have simply tried to instill other Draconian lockdown measures even if they never insisted on the 6-foot rule in the first place.  But still, it reminds us all that even our most “reputable” sources are not infallible.

Also, notice that when mainstream officials change their tune, revise their messages, and update their policies, people are expected to simply accept these without question (kind of like how they were expected to accept them without question the first time around).  Yet the people who questioned or criticized these policies earlier in the pandemic – often to their own detriment, as seen by the massive amounts of de-platforming and Twitter banning that went on – are not offered any sort of rectification or apology.

The post Not based on science: COVID experts admit guidelines were made up appeared first on NaturalHealth365.