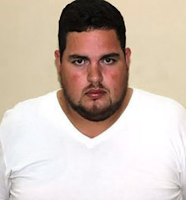 A Mexican lawyer who laundered millions in drug proceeds for the Sinaloa Cartel was sentenced Monday to eight years in federal custody.

Gibran Rodriguez-Mejia, 31, of Culiacan, Sinaloa, Mexico, pleaded guilty earlier this year to charges related to laundering $3.5 million by coordinating with couriers to smuggle the U.S. currency across the border to an exchange house in Tijuana.

Five co-defendants have also pleaded guilty in the case, according to the U.S. Attorney’s Office.

The defendant, who holds a Mexican law degree with a specialization in business and civil law, admitted that the funds he helped launder were proceeds from “multi-kilogram quantities of cocaine, methamphetamine and heroin smuggled into the United States by the Sinaloa Cartel,” according to federal prosecutors.
After the smuggled cash was converted into pesos, prosecutors say Rodriguez-Mejia provided bank accounts into which the money could be deposited.

From ElPeriodico:
He was arrested in December 2017 in Tijuana (Mexico)  by the authorities of his country and extradited to San Diego in September 2018 to respond to money laundering charges.
According to court documents, lawyer  Rodríguez Mejía  was part of a money laundering network made up of more than 20 defendants, of which he is the fourth to receive a sentence.
Another of those involved in this case is César Hernández-Martínez, who has also pleaded guilty and has his sentencing hearing pending on December 2.


Source: http://www.borderlandbeat.com/2019/09/mexican-lawyer-for-sinaloa-cartel-gets.html
Before It’s News® is a community of individuals who report on what’s going on around them, from all around the world.