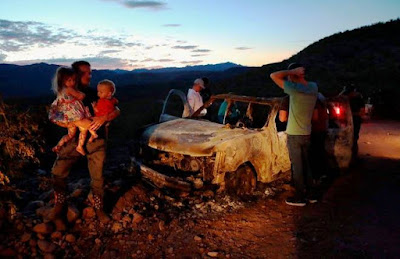 The families of nine women and children killed in an ambush in Mexico have filed a lawsuit against the Juárez drug cartel that accuses it of the massacre last year.

The lawsuit by relatives of the well-known LeBaron family of Chihuahua says they were targeted for their activism and publicly speaking out against the cartel and corruption in Mexico.

The three women and six children killed Nov. 4 were dual U.S.-Mexican citizens and members of the offshoot Mormon communities of Colonia LeBaron in northwestern Chihuahua and La Mora in Sonora state.
The lawsuit by Miller, Johnson and LeBaron family members was filed July 23 in U.S. federal court in North Dakota, where some of the families work and reside, splitting time in Mexico.
Two men whose wives were killed, Howard J. Miller and Tyler Edward Johnson, are from North Dakota, the lawsuit added. 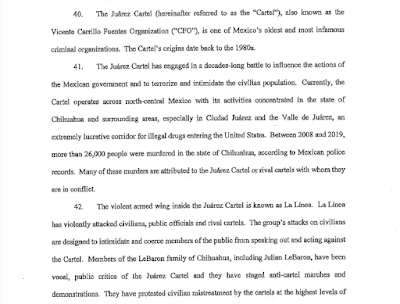 Miller was the husband of Maria Rhonita LeBaron. Johnson was married to Christina Langford Johnson.
The lawsuit lists as defendant the Juárez drug cartel, aka the Vicente Carrillo Fuentes organization, aka CFO, aka La Linea, without naming any individuals.
It is unlikely the cartel, which operates in the shadows outside the law, will respond to the court proceedings.
The 51-page lawsuit provides a history of the Juárez cartel and its violence, including a car bombing in Juárez and the killings of three people linked to the U.S. Consulate in Juárez, both in 2010.
The lawsuit graphically details the attack on the families at they traveled on a road controlled by La Linea on their way to the Mormon community of Colonia LeBaron.
The attack occurred about 70 miles south of the Arizona-Mexico border on a mountain road between the states of Sonora and Chihuahua.
The Mexican government has arrested at least three men and has identified 40 suspects in the massacre. 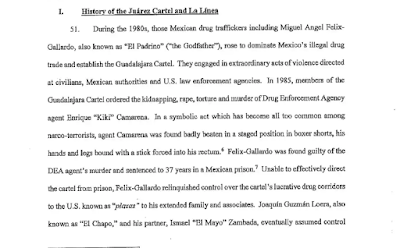 Cartel warfare
In the last week of October 2019, about 100 men met at a ranch owned by a member of La Linea to plan an attack on rival Sonora cartel members in Agua Prieta, the lawsuit states.
The plan was carried out on Nov. 4 by “cartel soldiers” dressed in civilian clothes, with some in helmets, and armed with AK-47 and AR-15 rifles divided into two teams of 60 and 40 men.
Very early on Nov. 4, the larger group attacked three homes and burned down two of them in an attack in Agua Prieta, the lawsuit states.
The 40-man group split into 20 person teams at ambush spots on mountain roads between San Miguel and La Mora.
Families attacked on road
The families were traveling in a convoy of three Chevrolet Suburbans heading to Colonia LeBaron before going forward to Phoenix and North Dakota.
The attacks occurred at two locations after one of the SUVs broke down, the lawsuit states. The family had noticed that cellphone towers weren’t working.
The vehicles were hit with heavy gunfire, including a barrage lasting at least 10 minutes, by hit squads hidden in hills, according to the lawsuit.
After being shot in the hip, one of the women, Christina Langford Johnson, exited with her hands up as gunmen continued firing, shooting her in the chest and killing her, the lawsuit states. 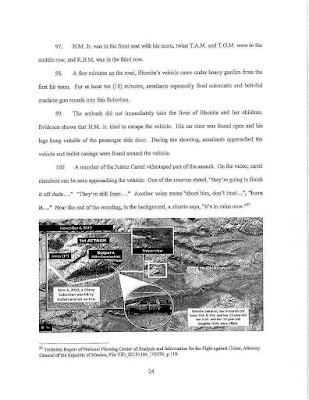 The vehicles were struck by about 200 shots. Some of the children were found dead, hiding in fetal positions between the seats, according to the lawsuit.
A door to one of the SUVs was found opened and one of the victim’s legs were out, indicating an attempt to get out before being gunned down.
Support journalism on the border. Click here to subscribe to elpasotimes.com.
Langford’s 7-month-old baby was strapped to a safety seat in the back. Bullets had struck her seat, but she was not hit. The baby was found after spending 10 hours alone and was extremely dehydrated, soaked in urine and in shock, the lawsuit states.
Drug cartel ‘terrorism’
The civil lawsuit seeks a jury trial and monetary damages on six claims, including assault and emotional distress, and accuses the Juárez drug cartel of “terrorism.”
“The Juarez Cartel has engaged in decades-long effort to maintain a state of terror and unrest throughout Chihuahua and parts of Sonora,” the lawsuit states.
“The goal of their campaign of terror has been to paralyze, intimidate, and threaten the Mexican government, local police, prosecutors, and the civilian population.”
The lawsuit noted that the cartel operates an “unrestricted drug trade” backed by armed forces capable of holding checkpoints on some roads and carrying out attacks, murders and the burning of homes.
The deaths of the women and children demonstrated La Linea’s control of a road between Sonora and Chihuahua and its intolerance of “any perceived connection to the Salazar faction,” the lawsuit states.
The Salazar faction refers to a reputed family-run crime organization in Chihuahua that’s part of the rival Sinaloa cartel.
“The sheer number of killings committed by all of Mexico’s criminal cartels demonstrates their ability to act with impunity,” the lawsuit states.
Filing below contains historical information about Juarez Cartel and reveals details of the massacre—use hyperlink below to access full view
Lebaron vs Juarez Cartel La… by Chivis Martinez on Scribd