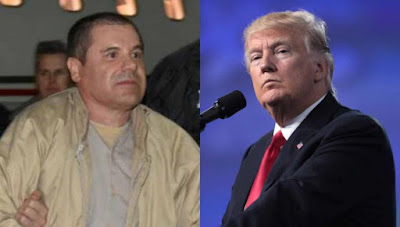 Joaquín Guzmán Loera, “El Chapo”, leader of the Sinaloa Cartel, is a fan of the president of the United States, Donald Trump, as stated by one of his lawyers Jeffrey Lichtman.

In a radio interview on the US program “In the Morning,” hosted by Len Berman and Michael Riedel, Lichtman said that Guzmán Loera likes Trump’s heavy hand against terrorism.

This seems counterproductive, since the leader of the Sinaloa Cartel was extradited a day before Trump’s inauguration as president of the United States, which for many was a “gift” from then- president Enrique Peña Nieto to the newly arrived US president.
He also spoke of the opinion that Guzmán Loera had of former President Barack Obama, whom he described, according to the defense attorney, as an irresponsible coward.

The truth is that the two captures of “El Chapo”, in February 2014 and January 2016, were in the administrations of Peña and Obama, who collaborated together so that the kingpin was captured.

Trump also used ” El Chapo ” as part of his speech to criminalize illegal migrants arriving in the United States, mainly from Mexico and Central America. Guzmán Loera is currently being held at the maximum-security prison in Florence Colorado, sentenced to life in prison.
However, in recent days he filed an appeal for the trial, and therefore the sentence, to be canceled and his case to be repeated with another jury and judge. ” El Chapo ” will have to wait for the decision.