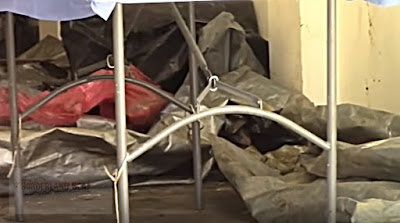 Mexico’s militarised crackdown on organised crime has left nearly 39,000 unidentified bodies in the country’s morgues, which are often unable to handle the volume of corpses brought in for autopsies.

A new investigation by the investigative NGO Quinto Elemento Labs found that an alarming number of people were simply buried in common graves without proper postmortems. Some were left in funeral homes and more than 2,500 bodies were given to medical schools.

“It’s possible that [medical] students are learning with bodies of persons being searched for by their families,” said an article accompanying the report, published on Tuesday. “The forensic crisis has transformed the Mexican state into a burying machine: 27,271 unidentified bodies went from the morgue to common graves – 70% of the total.”

Mexico’s militarised war on drugs has claimed nearly 300,000 lives over the past 14 years. Another 73,000 persons have gone missing – with their families often left to search for their loved ones unassisted by the authorities.

The investigation found that the number of unidentified corpses in Mexican morgues was 178 in 2006 – the year president Felipe Calderón first deployed the country’s armed forces against drug cartels. 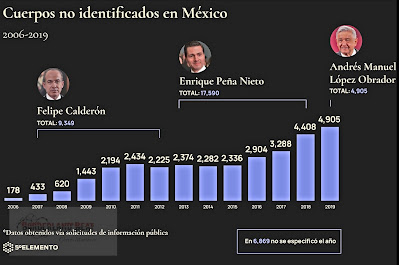 Mexican morgues have routinely run out of space to store unidentified bodies, prompting some local authorities to seek makeshift solutions such as storing bodies in refrigerated trailers. In 2018, a scandal erupted in Guadalajara when the stench of decomposition led to the discovery of a trailer containing 273 corpses which had been parked in a suburban neighbourhood.

Stories have also surfaced of workers and neighbours protesting against horrible stenches coming from overcrowded morgues in cities such as Tijuana on the US border and Chilpancingo in the heroin-producing heartland of Guerrero state.

The number of unidentified bodies in Mexican morgues has continued to accelerate, even as the current government of Andrés Manuel López Obrador has promised to take action. An additional 4,905 were brought to Mexican morgues in 2019, according to the report.