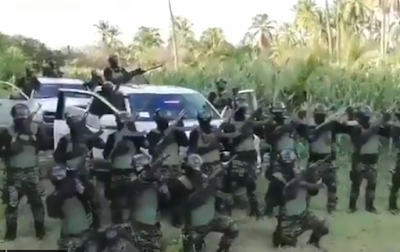 Sicarios of the “Vieja Escuela”, remnants of The Beltran Leyva Cartel, announce a clean Ometepec, Guerrero and threaten extortionists, those who collect fees and kill innocents who have been located and will be exterminated.

The Video translation by Sol Prendido  is as follows:

Sicario #1: This communication goes out to Ometepec and it’s surroundings. You are hereby advised that we are currently present in this area doing our purge of scum. We’re going after all those rats who are kidnapping, extorting, taxing, and and selling drugs.

We are a mob who only dedicates itself to narco trafficking. And we don’t have a need to bother citizens who work for a living. We don’t have to do other shit to support ourselves either. For al the people who work for a living: Transport companies, commercial enterprises and business men. Keep doing what you normally do because we won’t be bothering you for anything.

We already have every scum bag that we’re going after identified and located. Primarily the fucking kidnappers and extortionists who belong to Dorian Shege. That’s that scum bag who is killing taxi drivers and innocent civilians to generate fear and charge taxation’s. El Gafe is another one of those faggots from that gang of extortionists. Elvis Carvajal and Beto Saqualpan, they’re all the same shit.

We’re going to kill them for being the thieving rats that they are. Just as well we already have the locations and addresses for all their gunmen and lookouts. They will all end up dead like their thieving faggot bosses. And for all the branches of government you are hereby advised that this war is not against any of you.

Allow us to do our jobs so that Ometepec can return to peace. We are standing firm in Ometepec. And defending our motto: Zero robberies, zero kidnappings, and zero extortions. Sincerely, The Vieja Escuela mob assholes!