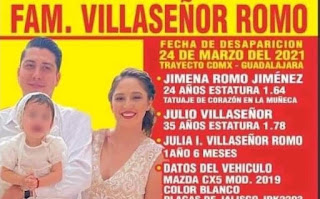 Solís Gómez reported that the elements have not yet declared, in addition to the fact that there are indications in the investigation that point to organized crime.

The seven Acatic police officers arrested for the disappearance of the Villaseñor Romo family who were returning to Jalisco from Mexico City, participated directly in the events, confirmed the Jalisco prosecutor, Gerardo Octavio Solís, who indicated that at least three municipal patrols were used.

“We consider that there is a direct participation in the disappearance (…), at least three patrols on the part of the Acatic police station (participated,” he said at a press conference.

Solís Gómez reported that the elements have not yet declared and added that there are indications in the investigation that point to organized crime.

“We have obtained a large amount of data, various addresses have been reviewed where we have found evidence related to organized crime,” said the prosecutor.

After reviewing various farms, the prosecutor said that “evidence has been found, drugs have been found” in the homes.

After the location in La Barca of one of the two minors who were missing, personnel from the State Attorney’s Office have been in that municipality, as well as Acatic and Guadalajara working on the case, he indicated.

“The staff is working hard and whatever area needs to be covered from operations, there will be enough staff,” he said.