Videos and pictures have surfaced online of a narco message from the Jalisco New Generation Cartel (CJNG) leader Nemesio Oseguera Cervantes (“El Mencho”). His directive disseminated in the town of Aguililla, Michoacan.

Just as well they were also found among other communities such as El Limón, Charapo, El Aguaje, El Naranjo, Chila, San José, and El Cajón.

The Michoacán government tried to suppress his communiqué. But his sicarios made sure to publish his words on film. 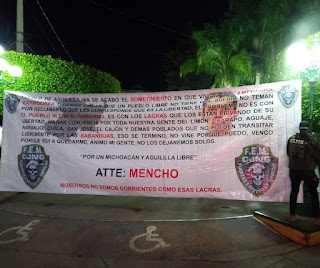 Manta translation is as follows:

To all the townspeople of Agüilla. The submission in which the threats, extortions and other things that a free people doesn’t have to suffer is over. Do not be afraid to claim what corresponds to you, which is freedom.

This problem of ours isn’t with the citizens or with the government, it’s with the scumbags that are depriving them of their freedom. It’s time to raise awareness for all of our people from the municipalities of Limón, Charapo, Aguaje, Naranjo, Chila, San José, El Cajon, and other towns that cannot move freely because of vermin.

That is now over. I didn’t come here because I can, I came because I am going to stay. Have courage my citizens. We will not leave you alone. This is all being done for an unrestricted Aguililla and Michoacán. Sincerely, Mencho. We’re not some cheap fucks like those damn scumbags.