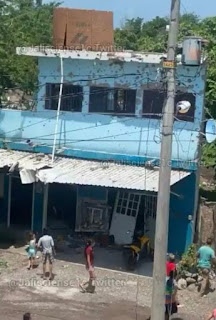 A new video from the Mexican underworld has just surfaced online. For this broadcast a citizen on the ground has released a film of the armed attack that was perpetuated against everyone in the area.

The war of attrition being fought between the United Cartels and the Cartel Jalisco New (CJNG) has spiraled into armed clashes in the streets.

Dozens of shells on the ground can be seen. Along with bodies littered everywhere. Just as well abandoned Improvised Armored Fighting Vehicles (IAFVs) are also observed.

The houses of innocent civilians affected by the drones are in plain view.

This was how the gate and the fence was left in pieces, destroyed. An armed drone equipped with C-4 explosives descended from the sky to destroy everything here.

The armored vehicles are over there. Right where the men can be seen standing a drone fell but it didn’t explode. They’re looking at the explosive and the drone.