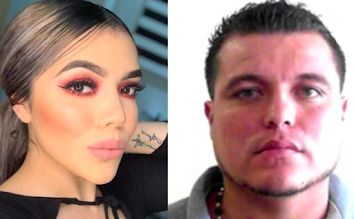 Stephanie Dorador, the wife of late Erick Samuel Deraz González (alias “El Güero Canesten” and/or “Cabo 03″), a deceased leader of the Jalisco New Generation Cartel (CJNG), was shot to death on Thursday at around 7:00 p.m. while she was inside her Hyundai Genesis in Tijuana, Baja California.
Reports indicated that she was going to a grocery store when armed individuals opened fire on her and fled the scene. She was shot twice on her head and chest.
Paramedics and municipal policemen arrived at the scene shortly after residents made emergency calls that a woman had been gunned down. They provided first aid to the young woman, but she had no vital signs and was pronounced dead at the scene. The killing occurred in Sanchez Taboada neighborhood.
According to local media reports, Stephanie was 20-years-old and worked in a beauty salon. She was also a registered law student at the Autonomous University of Baja California.
Background
Stephanie is the daughter of Ruben Dorador, a Tijuana Municipal Police officer who was suspended after investigators framed him with the CJNG.
She was married to El Guero Canesten, a high-ranking CJNG member in Tijuana who worked under Juan José Pérez Vargas (alias “El Piolín” or “El JP”). El Guero Canesten was once romantically involved with one of El Piolin’s cousins, Karen, who was kidnapped in 2013.
In March 2016, El Guero Canesten was arrested by elements of the Baja California Preventive Police (PEP) in possession of 26 grams of methamphetamine. By August 2016, state investigators framed him as one of the CJNG’s lieutenants in Tijuana.
But El Guero Canesten said he was a small-business owner and that he worked in his parents’ supermarket, Súper González, in Sánchez Taboada neighborhood. He was later released from prison and resumed his organized crime activities.
El Guero Canesten was murdered in September 2018 while he was at a sports facility with Stephanie. State authorities believe that Sinaloa Cartel leader José Luis Mendoza Uriarte (alias “El Güero Chompas”) ordered the hit.
Months after his death, rumors surfaced that Stephanie gave birth to El Guero Canesten’s child. The baby is believed to be 3-years-old.
GRAPHIC IMAGE BELOW
Sources: La Jornada; Zeta Tijuana; El Portal de Tijuana; La Opinion; VxT; Borderland Beat archives