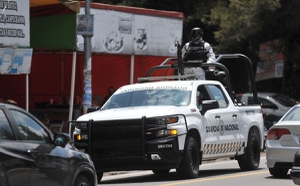 After the announcement of the “Support Plan for Zacatecas” headed by President Andrés Manuel López Obrador, elements of the National Guard took over the security of the nine municipalities of the state that ran out of police after the attacks and threats of organized crime.

In these municipalities, security will also be strengthened with elements of the Army to jointly combat the drug cartels that dispute the territory.

Authorities announced that when more support is required, soldiers will be sent from the military zones of the neighboring states of San Luis Potosí, Aguascalientes, Jalisco, Nayarit, Durango and Coahuila to monitor the borders and in areas of difficult ground access, there will be air patrols with three helicopter gunships.

The Ministry of Public Security reported a clean balance in the state in the last 24 hours in criminal acts related to organized crime.

460 Sedena and National Guard elements are added to strengthen security

On its Twitter account, the federal government reported that 460 new elements of Sedena and National Guard will join in support of the security strategy in the state, to the 3,388 elements of federal force and 2,187 of state and municipal public security.

It was also announced that nine priority social programs operate in Zacatecas, benefiting more than 261,000 people, with an annual investment of 1,504 million pesos.