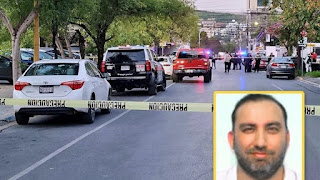 He was related to the smuggling of hydrocarbons, using the Mexican international bridges of Tamaulipas to cross thousands of this type of fuel from the United States to the national territory

From two gunshot wounds to the head, the Tamaulipan businessman Sergio Carmona Angulo was killed when he was in a barber shop in the municipality of San Pedro, Colonia Del Valle.

Carmona Angulo was related to the smuggling of hydrocarbons, using the Mexican international bridges in Tamaulipas to cross thousands of this type of fuel from the United States to the national territory, undisturbed.

The deceased, a source pointed out, was related to fuel carbons and charges to fuel transporters in that entity, for which he had an open investigation.

The execution was reported at 5:15 in the afternoon, in the business located in Río Manzanares and Río Rosas, where elements of Rescue 911 and the Municipal Police arrived.

Apparently, a gunman walked in while the victim as a paying client was shot twice in the head.

Upon arrival, the aid corps found the victim lying on the floor. The area is cordoned off by police. The authorities are trying to establish whether the attack was due to an attempted assault or a direct attack on the victim.