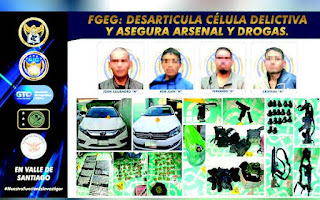 Following an investigation carried out by the Public Ministry, with judicial authorization, four subjects were arrested with more 1,200 doses of crystal meth and marijuana packets; small and long weapons, caltrops, 17 grenades, tactical equipment, and other instruments of crime, in a building located in the Loma neighborhood in Valle de Santiago.

The FGEG Criminal Investigation Agency coordinated operational actions with the Secretary of Public Security of the State, Mexican Army and National Guard; legal authorization was obtained to inspect a property located on La Paz Street in La Loma neighborhood, in search of objects and evidence related to an investigation for drug trafficking and sale of drugs on public roads, operated by members of a criminal group.

Probable causes were established that the evidence sought was in the area and this was confirmed when opening the bolted access gate where a motorcycle with license plates for the state of Michoacán and a car were at first glance.

While reviewing the property, the criminal experts when processing the collection and analysis of physical evidence, packed the following crime instruments:

• 9mm caliber short gun with two magazines. • 40 gauge short gun. • More than 60 cartridges of different calibers. • A modified shotgun. • A gas tank refitted from its base, inside which 3 long weapons and 4 metal magazines were located, two of them loaded and two empty.

As for narcotics, a transparent yellow bag with 1,235 doses of crystal meth was visible. A black bag with the characteristics of marijuana, as well as 29 transparent packets with the same herb.

Wooden instruments, tactical equipment, caltrops and a boat with explosives inside were also located at the crime scene.

In the operation supported by elements of the GERI of the FGEG, Joan Alejandro “N”, 26, originally from the State of Nayarit; Jose Juan “N”, 22, Fernando “N”, 28 years old and Christian “N”, 28 years old, were arrested.

The evidence located on the site will be part of the technical testimony that criminologist experts will provide and will be integrated into the investigation folder for the Attorney General’s Office. The legal situation of the detainees will be determined in the coming hours.