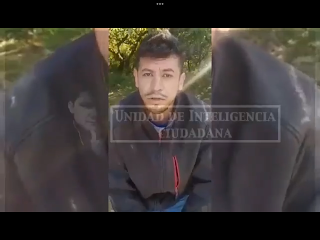 A local citizen was allegedly freed by “El Fantasma” after being detained and investigated. He now finds himself with his family once again. Suspicion fell against him after incriminating texts with “El Padre”, a known Carteles Unidos member, were found in his phone.

Within this broadcast the captive gives insight into the illicit affairs of local extortionists. His illegal detention at a hasty cartel checkpoint reveals the criminal tactics being employed by an opposing force.

His testimony aknowlegdes that at a government complex known as Junta Local de Sanidad Vegetal in the city of Uruapan a collection of farm vehicles and names of sharecroppers took place.

Captive: My name is Chavez Sanchez. I’m an engineer in the town of Toreo El Alto. And I’ve been detained here because I was suspected of buying stolen avocados. This is the reason why I’m here. I can swear to you that from the dirt road on the old path that runs from San Andres Coru.

All the way to the town of Calzontzin. There are men there in two trucks. They’re moving around in Chevy Tacomas, one is grey and the other is orange colored. Each vehicle contains 6 armed men. They were threatening citizens that they’re going to start charging everyone 10 thousand, I’m sorry, 15 thousand pesos per hectares.

They then lowered it down to 10 thousand pesos. They claimed that they were going to start calling everyone to meet at a certain place to pay there. Initially they did call various individuals.

Because in Sanidad Vegetal they took out farm tractors from every grove and gathered the names of every vegetable producer in the region. Each farmer was called by telephone. Many citizens did go to pay up.

Interrogator: Who leads this mob?

Captive: It’s been said that this mob is being led by an individual who goes by the name of “El Padre”. These individuals went straight to the offices. Just as well they went to the community. They went to these two places to gather phone numbers and the farm tractors.