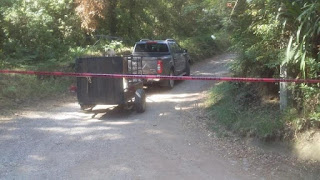 Samaniego was killed when he was traveling in a truck attached to a trailer. He was surprised by a group of armed men on the dirt road

Authorities from the state of Hidalgo learned of the murder of Eligio Samaniego, identified by intelligence agencies of the federal government as administrator of the assets of Reynaldo El Rey Zambada García, brother of Ismael El Mayo Zambada, one of the leaders of the Sinaloa Cartel.

The events, according to the information obtained, were recorded around nine in the morning on Tuesday, on a dirt road that connects the communities of Los Reyes and Venta Quemada, in the municipality of Acaxochitlán, located 69 kilometers from Pachuca, capital of Hidalgo.

The information collected indicates that Samaniego was killed when he was traveling in a truck attached to a trailer. He was surprised by a group of armed men when he was on his way to a ranch supposedly owned by El Rey Zambada.

Reynaldo Zambada was arrested in October 2008 in an operation in the Lindavista neighborhood, in Mexico City, and later extradited to the United States, where he has been part of the prosecution witnesses against Joaquín El Chapo Guzmán Loera.