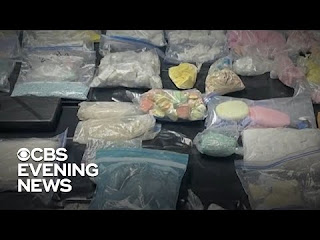 The leading cause of death for Americans between 18 and 45 isn’t COVID-19 or car accidents — it’s fentanyl overdoses. With a majority of the chemicals in fentanyl produced in China, the Drug Enforcement Administration is now calling on the Chinese government to crack down on the supply chain networks producing the illegal drug.

“We would like China to do more,” DEA administrator Anne Milgram told CBS News. “For example, we need to be able to track every shipment of chemicals that’s coming out of those Chinese chemical companies and coming to Mexico. Right now, we can’t do that.”

To stop fentanyl from getting into counterfeit drugs, the DEA is focusing on what’s called precursor chemicals — the ingredients needed to make fentanyl. Milgram said the materials are made in China then shipped to Mexican cartels before arriving at the U.S. border.

The DEA has seized 2,100 pounds of precursor chemicals from January 2021 to March 2022, Milgram said. It’s enough to make one billion potentially lethal doses, but Milgram knows her agency is not getting all of it.

“This is what we worry about,” she said. “That’s part of why we are so focused right now on stopping the chemicals coming out of the Chinese chemical companies. If we can go as far upstream as possible to China, we have a much better chance of stopping it ever being made in Mexico.”

“There’s a relationship between these Chinese chemical companies and the criminal cartels in Mexico,” she said.

Milgram said that once the drugs make it to the border, “it is too late.”

“I can say with 100% assurance that the criminal drug cartels in Mexico will stop at nothing to get fentanyl into the United States,” she said.

Fentanyl’s threat to teens is also a concern because of how easily fentanyl-laced drugs can be bought online, Milgram said. Three quarters of teen overdose deaths in 2021 involved fentanyl, according to a study published in JAMA in April.

“We know that these fake counterfeit prescription pills are widely available on social media,” Milgram said. “If your child is on TikTok or Snapchat or Instagram or Facebook, drug dealers can access them there. And that —  it’s almost like Uber Eats, being able right now in America to get a fake pill delivered to your doorstep.”

“The amount that could be on the tip of a pencil is enough to kill someone,” Milgram said.