Honduran authorities arrested accused cartel leader Herlinda Bobadilla on Sunday, following an extradition request for her and her sons by the United States. US authorities had requested that she and her sons Tito and Juan Carlos Montes be extradited to the US and had offered a $5 million USD reward for each of them.

The arrest occurred after an “intense confrontation,” during which her son Tito Montes Bobadilla was killed, according to a tweet by National Police Commissioner Gustavo Sanchez Velasquez. Three other people were also arrested, Sanchez said without naming them.

Police in Honduras says they received many tip-offs after the US State Department offered the multi-million dollar reward for the three persons just two weeks ago. They say they tracked down Herlinda Bobadilla and her sons Tito and Juan Carlos in the mountains of Colón province using aerial surveillance. Special forces were deployed to the area and following an “intense confrontation”, they arrested Herlinda Bobadilla.

In a statement, Honduran police said one member of the clan had been killed “when he opened fire on special ops agents”. The police chief later confirmed that the killed clan member was Tito Montes.

The United States has accused Bobadilla of being a leader of the powerful Montes drug-trafficking organization, which it says receives cocaine in the Central American country from South America ultimately destined for the United States. 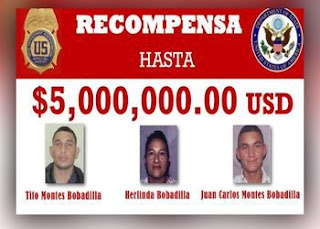 Today, the group still benefits from connections with one of Colombia’s top trafficking organizations: the Urabeños. According to La Prensa, the Montes Bobadilla clan is the group’s top partner in Honduras, receiving, processing, and in some cases producing cocaine in collaboration with the Colombian group. But transport groups have gained more autonomy in recent years, as some of the larger organizations in Mexico have splintered and as more drugs have begun to flow to Europe.

The Montes Bobadilla clan may even be cultivating coca and producing cocaine in Honduras. Two large coca plantations were discovered in March in the hillsides of Irina, a municipality in the Colón department that has become a hotbed for coca crops. Both farms allegedly belonged to the family clan.

It was reportedly founded as far back as the 1980s by Pedro García Montes, a Honduran with close links to Colombia’s Cali drugs cartel. After García Montes was shot dead on a beach in Colombia by two hitmen in 2004, his trafficking business was taken over by his cousin, Alex Adán Montes, one of Herlinda Bobadilla’s sons. Alex Adán Montes was twice arrested on drug charges. The first time, gunmen sprang him from house arrest, killing two of the officers guarding him and allowing him to flee to Colombia.

The second time, he was released into house arrest on medical grounds. He died of a heart attack in November 2014. His brother Noe Montes took over leadership of the clan until 2017 when he was arrested and extradited to the US.

With Noe Montes sentenced to life in prison, control of the Montes cartel passed over to Tito, Juan Carlos, and their mother, Herlinda Bobadilla, police say. According to prosecutors, Ms. Bobadilla had over the years become ever more involved in the family’s illicit business, from first assisting her sons in the importation, transportation, and distribution of cocaine to finally becoming a joint leader of the clan.

Her arrest comes at a time when the role of Honduras in international drug trafficking is being highlighted in a number of high-profile cases.