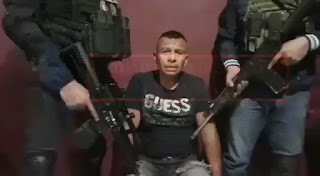 The capture and subsequent interrogation of Erick Martinez Dimas aka El Pilas, plaza boss for the United Cartels in city of Uruapan takes place in the following video. Within this broadcast the names and recent illicit affairs of all parties involved are confessed before the camera.

For educational purposes the monikers Galleta and Galletilla translate into English as Cookie and Cookie junior. Although these aliases sound very unconventional in nature for actual death dealers to have. Many times the purpose behind their nom de guerre or pseudonyms comes down to simplistic reasons.

The following video has been deemed safe for all to see. At this time the fate of this male is unknown.

Video translation is as follows:
My name is Erick Martínez Dimas. I’m known as El Pilas. My brother is El Galletilla, my cousin is El Galleta and we belong to the Viagras cartel. We were positioned in the communities of Charapendo, Arroyo Colorado, and it’s surroundings. My brother El Galletilla participated in the events that took place on the 22nd. In addition both Galleta operatives participated in the incident that took place against the gambling machine merchant for his refusal to pay extortion.
Just as well the matter with the old man, he was set up outside of his home. Once I left the area the guys I just mentioned participated in that execution. And for the hit on “F.U.s” brother. The men arrived in 2 white trucks, they descended, the word spread that everyone had to participate in a job on behalf of El Galleta and El Galletilla. They’re the ones who participated in that killing along with Piñon and El 14.
I want to introduce myself. My name is Erick Martinez Dimas aka El Pilas. The Priest and El Calzonci would associate with our bud Chatarras from the brewery. They communicated with each other in order to give the Galleta operatives support. Just the same the three of them progressed forward by maintaining their union with each other. El Galleta and Galletilla would dialogue with Piñon and El Catorce.
They’re the ones who operated here in the city of Uruapan. Additionally, theses are the individuals who would abduct and commit the homicides that they perpetuated. The Priest is the one who gave us support, he made sure we didn’t have any problems with the government or the ministerial policemen. The soldiers in Charapendo networked with the Viagras cartel. They roamed freely in vehicles with each other, civilians and troops.