U.S. Border Patrol agents assigned to Del Rio Sector apprehended a man, wanted by the Government of Mexico in connection with the murder of a Mexican politician, on May 17.

At approximately 6:35 p.m., Eagle Pass Station agents apprehended the 25-year-old Mexican national after he illegally entered the United States. During processing, record checks revealed that he has been deported several times, most recently in 2019, and is wanted for questioning by the Government of Mexico in connection with the murder of a politician in Piedras Negras, Coahuila, Mexico.

“This is exactly why we need our agents back to the field,” said Del Rio Sector Chief Patrol Agent Jason D. Owens. “Cartels use large groups and those wanting to turn themselves in to tie up our agents with detention and processing assignments. This gives them the opportunity to bring in the criminal
elements.”

Sources from the State Attorney General’s Office (FGE) of Coahuila de Zaragoza, announced that the detained person is Jesús Alfonso Botello Tovar, who is nicknamed “El Mirindo” and who, at the beginning of the investigations corresponding to the murder of Purón Johnston, was one of the lines of research; although his possible involvement was later ruled out, so there is no arrest warrant against him.

“El Mirindo” was previously arrested in October 2018 on murder charges in Mexico accused of the murder of Francisco de la Cruz Vásquez and injuries to two minors.

As a convicted felon with a prior removal, he faces a charge of 8 USC § 1326 – Re-entry after Deportation, which carries a maximum sentence of up to 20 years in prison.

On the night of Friday, June 08, 2018, upon leaving a debate between the candidates for federal deputy in the parking lot from the Faculty of Administration and Accounting (FAC) of the Autonomous University of Coahuila (UAdeC); Fernando Purón was killed by a subject who shot him in the back and in the head at close range. The Mexican congressional candidate had just left the debate hall where he addressed public security in his northern state. He walks over to a person holding a phone and poses for a picture. In a matter of seconds, a man walks up from behind and shoots him in the head, killing him before walking off. 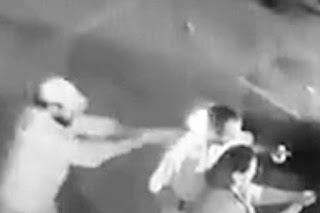 The death of Coahuila state’s Fernando Puron brought to 112 the number of candidates or politicians killed since the launch of Mexico’s electoral campaign in September, according to the consulting group Etellekt. Puron was the first candidate running on the federal level to be killed.  The victim was a candidate for the Coahuila First District Deputy position. There are seven Coahuila districts. It is a federal position similar to a congressman in the U.S. The first district is located in the utmost northern part of the state and borders Texas cities such as Del Rio and Eagle Pass.

In a news conference aa few weeks after the murder, authorities announced they have issued arrest warrants for two men believed to be the authors of the murder, not necessarily the trigger-man. The wanted men are brothers Erick and Ignacio Arámbula Viveros, there is a 10 million MP reward offered.

In 2020, The State Attorney General, Gerardo Márquez Guevara, reported that Erik Arámbula Viveros was sentenced to 21 years in prison and to pay a fine for being an accomplice in the murder of the former mayor of Piedras Negras, Fernando Purón Johnston.

He added that it was proven that he is fully responsible for being an accomplice in the crime through an agreement for prior assistance, in the Commission of the crime of Qualified Intentional Homicide committed with advantage and treachery against Fernando Purón Johnston.

“The facts proven in the trial consisted in the fact that on June 8, 2018, the defendant, Erik Arámbula Viveros, previously helped the perpetrator of the act, getting him accommodation in the city of Piedras Negras.

He also provided him with a vehicle for transportation and later confirmed that the victim was in the facilities of the Faculty of Administration and Accounting of the Autonomous University of Coahuila (UA de C), were when he left he was attacked and shot dead. During the trial, twenty-two pieces of evidence were released, which allowed the court to unanimously consider the defendant fully responsible for the events.

In the first investigations, it was known that the Arámbula Viveros brothers are originally from the state of Tabasco, Erik was a Cavalry Lieutenant and even won a gold medal in a horse riding competition.

While Ignacio, the alleged perpetrator of the crime, is still believed to be a fugitive from justice. Now he is already a retired captain, but he was head of the Municipal Police in Tenosique, Tabasco.